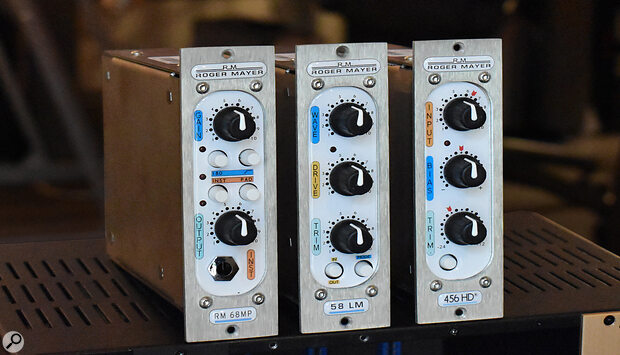 Mayer’s all‑analogue tape emulation is joined in the 500 series by a mic preamp and limiter.

Roger Mayer is perhaps best known in the UK for designing and building guitar pedals for some of the legendary names of the ’60s: Jimi Hendrix, Jeff Beck and Jimmy Page, for example. But across the pond, where he moved in the late ’60s, he’s just as well known for a range of outboard gear that graced many studios, including Electric Lady in New York. Today, Roger is based in his native UK, where he continues to make high‑quality pedals and studio processors, and I mean ‘make’ literally: the units are hand built by Roger himself.

My interest in his recent designs was first piqued when producer Dave Eringa (Roger Daltry, the Manic Street Preachers) spoke almost evangelically about how much they’d transformed his approach to recording and mixing. And having tried, loved and then bought a couple of the 456HD 500‑series tape‑machine emulation modules, I decided to check out the two newer 500‑series units in Mayer’s range: the 68MP mic preamp and the 58LM limiter. Together, these three modules have the potential to form an interesting recording channel.

All three units sport the same styling as Roger’s outboard offerings, with simple, brushed‑steel metalwork adorned with a glossy white background for the clear and colourful control markings. The controls feel solid and functional, and while the appearance is not displeasing, the main focus is clearly on what’s happening under the hood.

They’re all derived from standalone devices in the Roger Mayer range, so I made a point of speaking with producer/engineer Sean Genocky, who has been deeply involved in the development of these modules, to find out more of the thinking behind them. Sean explained how keen they were to make some of Roger’s designs more affordable, which these modules do even when you factor in the 500‑series chassis: they’re each available for £600$650 or under, whereas Mayer’s full‑sized rackmount devices (some of which, admittedly, have several channels) can cost five or six times that. But he was also keen to discuss workflow, and referenced an era when recording and mixing was a simpler experience: recording an artist who knows what they’re doing through a high‑quality recording chain really shouldn’t be an overly complicated process. Hence the focus is not only on delivering the sound of the larger units, but also on keeping the controls fairly minimal and simple to use.