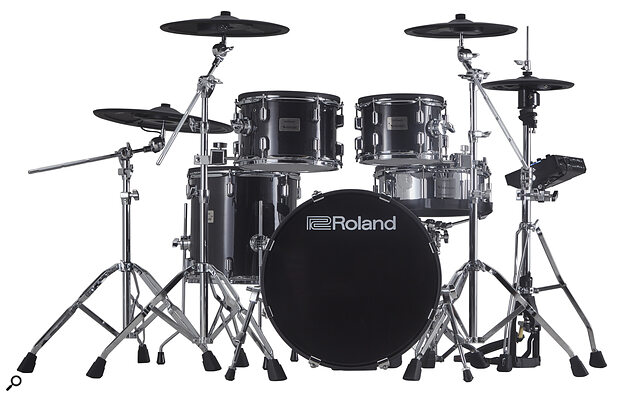 Roland’s electronic drum kits ‑ or V‑Drums, to give them their correct title — have been at the forefront of electronic percussion since the 1990s. Theirs is probably the name most musicians think of when they are asked to name an electronic kit. By the same token, when asked to describe an electronic kit I’m sure many imagine the classic configuration of a set of slim pads with rubber or mesh heads hanging from a chrome rack system and connected to a ‘brain’ by a loom of wires. And that’s pretty much the way it’s been for those last 25 or so years. As I’ve mentioned in previous reviews, in the case of the majority of today’s electronic kits, if you shut your eyes it’s more than possible to imagine you are playing an acoustic kit. But open your eyes and that’s where the illusion ends. As Little Britain’s stage hypnotist Kenny Craig puts it... 3, 2, 1, and you’re back in the room.

This isn’t too much of an issue if you are using the kit for practice or as a studio tool, but for live work ideally you want something that looks the part. Even in the studio, the ‘vibe’ you get from sitting behind a full drum kit can lift your performance.

Step forward the Roland VAD506. VAD stands for V‑Drum Acoustic Design and the 506 (along with its smaller counterpart, the VAD503) is exactly that — V‑Drums that are designed to look like a full acoustic kit, and a very nice acoustic kit into the bargain.

The VAD506 ships as a five‑drum kit featuring a 20‑inch kick drum; 10‑inch and 12‑inch rack toms; a 14‑inch floor tom; and the PD140DS 14‑inch digital snare. The cymbals comprise 14‑inch and 16‑inch crashes; the misleadingly named VH10 12‑inch hi‑hat; and the impressive 18‑inch CY18DR digital ride cymbal. Sound comes courtesy of the all‑new TD‑27 module. This kit is very much about looks and it certainly doesn’t disappoint. The black sparkle wrap is very classy, and the lugs and hardware used on the drums are both beautifully designed and functional.

The kick and tom shells are constructed from poplar. Perhaps not as revered as birch and maple for its tonal qualities, it is still (no pun intended) a very popular wood for the construction of acoustic kits. In the case of the VAD506, the drums use a thick two‑ply shell to achieve the opposite of what is required by an acoustic kit: tone and resonance. If you are trying to accurately trigger electronic sounds, the last thing you want is additional resonance and vibration from the shell causing mis‑triggering. Staying with triggering, the 10‑inch tom features a single trigger cone offset toward the edge of the drum and another for the rim trigger, while the 12‑inch rack and 14‑inch floor tom use three cone triggers per drum (plus the rim trigger), to ensure that there are no ‘hot spots’ where samples may trigger more loudly or quietly on these slightly larger drums.

The KD200 MS bass drum is a slightly different design compared to the other drums, but is in keeping with the existing ‘full size’ electronic kick drums in the Roland range, the KD180 and KD220. The KD200 is a 20‑inch design with what is essentially the trigger part of a Roland KD10 drum pad mounted in the centre of the batter head. The drum also includes ‘air vented mechanics’ that precisely vent the air pressure inside the drum every time the beater strikes it, to further enhance the realistic feel. Like the toms, I can’t fault the feel or the triggering of this kick. It feels very natural as the beater strikes the head, with just the right amount of give. The kick drum is often the downfall of many electronic kits, as it takes quite a beating, and the usual minimalist designs have a habit of not staying in place. The size, weight and substantial chrome spurs on the KD200 help to make this drum feel exceptionally solid. 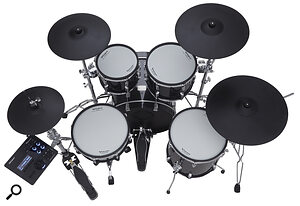 Cosmetically, the VAD506 is close enough to the real thing to tempt even the most technophobic drummer.In keeping with the acoustic look of the VAD506, the kit ships with three heavy‑duty, double‑braced boom stands and two tom mounts for the rack toms. This is a pleasant change from the usual chrome or black rack systems, whose construction is often akin to building an Ikea scaffold. As seems to be the case with the higher‑end kits I’ve reviewed, a snare and hi‑hat stand are not included. I can understand the hi‑hat stand as these can be, like bass drum pedals, quite personal in terms of feel and response, but I’m surprised a snare stand is missing.

The CY16RT and CY14CT are the all‑new crash cymbals included with the VAD506, the ‘T’ indicating that they are now 40‑percent thinner than previous incarnations. This gives them a more natural ‘give’ when you play them hard, and they certainly feel better than their more rigid counterparts. The CY16 can be configured as either a crash (bow/edge trigger) or a ride (bow/bell trigger), with three‑way triggering made possible by using two cables. As you’d expect both cymbals respond to choking, the effect of grabbing the cymbal to suddenly stop it making a sound.

The VH10 hi‑hat is a 12‑inch single‑cymbal configuration using a familiar (for Roland) sensor unit, which sits on the stand below the cymbal, to sense its open and closed positions. I think Roland have become real masters of what is quite a tricky part of the kit to emulate electronically. The VH10 is a little lighter than the VH11 that ships with the TD25 kit and I think this optimises it for more articulate foot splashes and open hi‑hat work.

Everything connects together with a jack loom terminating in a multi‑pin connector that locates into the bottom of the TD‑27 module. Roland even provide a small clamp to attach the TD‑27 to the hi‑hat stand.

I’ve omitted the snare and ride cymbal from the general overview of the kit for good reason. These are part of the new digital range previously only available on the flagship TD50 series. The fact that they connect via dedicated USB cables rather than the standard jack cables should give you some idea of the amount of additional data that is being sent from them to the module.

Starting with the PD140DS snare drum, it looks to all intents and purposes like a standard 14‑inch metal snare. Before we even get to what it sounds like, this is a really great‑looking drum. With its tubular lugs and polished chrome finish, it wouldn’t look out of place on a high‑end acoustic kit. It also weighs a ton, giving a really substantial impression.

The full size drums certainly set this kit apart and allow it to fit into almost any situation where you might use an acoustic kit.

The usual quarter‑inch jack connection is replaced by a short trailing USB socket that hangs from beneath the drum, rather than being mounted in the shell, which is a little odd, but it’s secured reasonably neatly with cable clamps. Under the three‑ply mesh head are four cone triggers that supply the module not only with information on how hard the drum is being hit, but also with positional information. This allows the drum to respond more like an acoustic snare, and the sound to vary depending on where the drum is struck; a little more resonance and tone towards the edge of the drum and a more substantial ‘whack’ in the centre. It is also possible to use brushes (by selecting the appropriate option in the TD‑27 module), which the snare is able to automatically detect and respond to accordingly. I found that the brushes worked very well for striking the drum, but the ‘stirring’ techniques associated with more jazzy styles weren’t interpreted quite as well. However, if you primarily play in that style I’m not sure you’d be choosing an electronic kit.

The other extremely impressive and very usable feature governs how the PD140 deals with cross sticks. This is a technique achieved by placing your hand on the drum head and hitting only the rim with the stick, for that classic ‘click’ sound. On an acoustic drum, this happens naturally, but on a drum that is triggering samples it’s not quite so simple. Cleverly, the head of the PD140 responds to the static electricity in your hand when it’s placed on the head of the drum, instantaneously switching the rim sound to a cross‑stick sample. This really is a revelation in terms of electronic drums. Previously, the options were limited to selecting a dedicated cross‑stick preset (forfeiting a rimshot option), pressing a modifying button or playing a dedicated part of the rim.

Similar functionality has been designed into the CY18DR digital ride cymbal. At 18 inches across, this isn’t far off the size of a typical acoustic ride cymbal, which certainly adds to the playing experience. Connection is, once again, via USB and another slightly odd trailing socket affair, allowing for transmission of data from the multiple sensors, which include three bow sensors, a bell sensor, an edge sensor and a touch sensor. The three bow sensors allow for a degree of positional sensitivity that means you can play across the cymbal, from bell to edge, and the sound will change accordingly. The sensor in the bell is able to differentiate between the tip of the stick and shoulder, which means that you can employ the same playing techniques you would with an acoustic ride cymbal. In addition to the choking feature found on the two crash cymbals, the CY18DR utilises the same static electricity trick the PD140 snare is capable of, enabling you to deaden the cymbal by simply placing your hand on its surface.