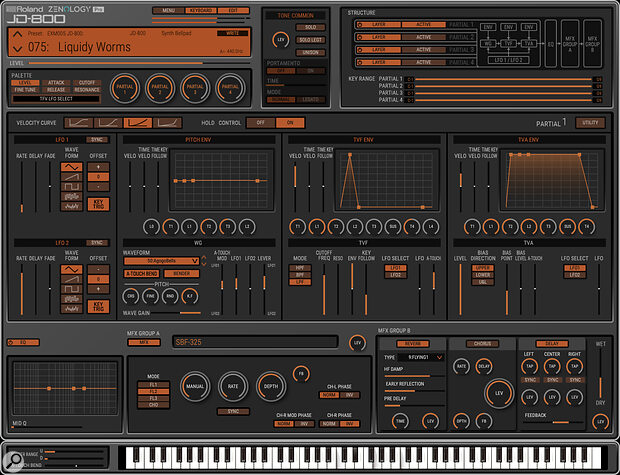 The JD‑800 is the latest instrument to join the Roland Cloud.

“Ask your average graphic artist to draw you a picture of a synthesizer and most will come up with something like a JD‑800,” wrote Julian Colbeck, beginning his follow‑up review of Roland’s original JD‑800 back in the April 1992 issue of Sound On Sound. He continued, “A sea of knobs and sliders and flashing lights, the JD is everyone’s common perception of this type of instrument.”

However, in 1991 when the JD‑800 was released, this lavish set of physical controls was far from the norm. The popular, so‑called workstation keyboards of the late ’80s and early ’90s — like Roland’s D‑50, Korg’s M1 and 01/W, and Yamaha’s SY85 — had dominated the market, embracing a less‑is‑more philosophy when it came to front‑panel physical controls for programming an instrument. The JD‑800 was very much a reaction against this direction. Therefore, it’s perhaps ironic that, 30 years later, Roland would recreate a JD‑800 as a plug‑in instrument, since you’re (obviously) lacking the abundance of actual faders that was the raison d’être for the original!

This new JD‑800 is implemented in the Roland Cloud as a Model Expansion, rather than a dedicated Anthology Instrument like some of the company’s other virtual recreations. Since Gordon Reid discussed Roland’s online service in his Juno 60 review in the May issue, I’m not going to retread the same ground here. Except for saying I’m not a particular fan of such subscription services — especially when it comes to plug‑ins — and I wish Roland had implemented the JD‑800 as its own instrument like, say, the Juno 60, rather than as an expansion for another.

What’s In A Patch?

The JD‑800’s programs are known as patches, and each patch comprises up to four tones, referred to on screen as partials. A partial consists of a wave generator that uses one of 108 available waveforms, and the output of this passes through a time variant filter and amplifier. Each of these three stages (pitch, filter and amplifier) can be modulated by independent envelopes, along with the output of two LFOs. Finally, the output of the four partials passes through an EQ and two MFX (multi‑effect) stages, completing the patch.

Zenology’s main Tone screen offers the basic controls, and, as usual, you click on the current preset’s name to open the Tone Browser. To see only the JD‑800 presets, select All at the top of the Bank List, and JD‑800 from the Model list at the bottom. 128 presets are provided to get you started, including the original 64 factory patches that begin with the infamous ‘Millennium’ and its unmistakable breadth of sparkly, digital goodness, with layers of wispy breath, synth bells and modulation — we’re definitely back in the early ’90s. And it’s a reminder of times when hardware synths put the most impressive‑sounding preset first, thus preventing its use in any serious music production!

Of the new presets, the possibly unusable Droid Crew, the silky strings of the organ‑like Muscle Beach and the evolving Requiem, along with Padtergeist (just for the name!) are good examples of the JD‑800’s architecture. Others that piqued my interest were the eerily glassy Lonely City, more synth bells with Cele Bells, the pulsing String Wave, and Trickle Seq, which is just waiting to be arpeggiated. Also worthy of a mention are Irish Eyes, which makes me wish I were scoring a poignant ’90s TV procedural drama, and a muted tribute to that sound from Faithless’ ‘Insomnia’ called SleepLess.

One of the reasons the JD‑800 arguably sounded brighter (and a bit special) was due to the synth operating at a staggering 44.1Hz. This was significant at the time, and for many years after, since Roland’s more common and popular JV series of keyboards and modules, like the JV‑1080, had a 32kHz output.

Returning to the Tone screen, beneath the preset’s name is a custom set of knobs for the JD‑800 extension. These are basically performance controls to adjust the level, fine tuning, attack, release, cutoff, resonance and the rate of LFO1 for each of the four partials used in the patch. A nice touch would have been if the corresponding knob becomes greyed out when a given partial isn’t in use for the current patch. Still, as you’d expect, right‑clicking a knob allows assignment to a MIDI controller, just like the similar controls in the Detailed Settings Screen.

This screen is opened via Zenology Pro’s Edit button, and you’ll see the sensible if unimaginative layout of the various parameters. Clicking a partial’s Active button in the Structure area chooses what partial is being edited in the main part of the screen; usefully it’s easy to copy and paste a partial’s settings via a pop‑up menu hiding behind the Utility button. And along the bottom are controls for the EQ and two MFX groups that apply to the whole patch. The effect for MFX Group A can be chosen from a larger list of algorithms than was available on the original JD‑800. It includes some classic Roland chorus options, such as Space‑D, CE‑1, SDD‑320, and the infamous Juno 106 chorus; plus, there’s everything you would expect, like phasers, flangers (including the SBF‑325), distortion, bit‑crushing, pitch‑shifting and more.

If you want something more pedestrian, there’s an effect called JD Multi that features four modules: distortion, a phaser, a simple spectrum EQ and an Enhancer. This is much like the three fixed modules available in MFX B, which are bread‑and‑butter chorus, delay and reverb effects. And in both modular cases, you can change the order of the signal chain by hovering over the top of a module until a white outline appears, and then dragging it to the required position.

The Very Model Of A Major Zen Expansion

Despite the JV‑880 Model Expansion being a welcome addition, there are a few areas where Roland could have made it even better. To begin with, it’s not a JD‑990 (see box) and having this superior iteration of the JD‑800 in software would have completed if not my life, certainly the Roland Cloud. Additionally, the extra waveforms found on the SL‑JD80‑series PCM expansion cards that were available for the JD‑800 aren’t included, which seems like a missed opportunity compared to Korg’s virtual M1. And while the included documentation file is perfunctory, you can always download the JD‑800’s original manual to gain more insight into the instrument. This includes a handy ‘Ideas For Creating Your Own Sounds’ section, giving you insight for creating new synth, piano, bass and other types of patches.

Roland have done a great job re‑imagining the JD‑800, maintaining the sound that made the original so appealing.

The JD‑800 Model Expansion can be used with Roland’s Zenology plug‑in (including the Lite and Pro versions) as well as the Jupiter X and Jupiter‑XM Zen‑Core hardware synths. Model Extensions are included with Roland Cloud Pro and Ultimate subscriptions or, alternatively, you can purchase a JD‑800 lifetime key for £139$149. For a limited time, this latter option also includes six months of Roland Cloud Ultimate membership for free. This isn’t an unwelcome perk, although the idea is obviously to tempt you into paying for Ultimate membership, but $149 seems a little on the expensive side for such a Model Expansion, even if it can be used with the free version of Zenology.

Despite a few gripes, Roland have done a great job re‑imagining the JD‑800, maintaining the sound that made the original so appealing. The factory presets are dated (much like the synth itself!), of course, but I’d be complaining if they hadn’t been included; and the salad of new presets nicely complement the originals. Yes, it’s a little pricey and a JD‑990 would have been nice, but if you want to relive a classic ’90s digital synth, the JD‑800 has arrived in the Roland Cloud.

As is often the case, the JD‑800 had a corresponding, rackmounted sibling: the JD‑990. In essence, it’s a JD‑800 in module form with none of the physical controls you’ll find on the keyboard version, although Roland did take the synthesizer concepts further. For example, instead of a patch being a single structure, as described in the main text, there are six types of structures offering different combinations of ring modulation and double filtering. It included 195 waveforms (87 more than on the JD‑800), and an FM‑like effect called Frequency Cross Modulation (FXM) can be applied to each waveform within a tone (or partial).

Because of these enhancements and its more compact size, the JD‑990 has become highly sought after in the current secondhand market and is regularly listed for around £1000$1000 on eBay (a JD‑800 generally goes for somewhere between £1500$1500 and £2500$2500). Its sound, presets and programmability are irresistible for some — myself included — and I have to wonder why Roland opted to recreate the JD‑800 and not the JD‑990, which would perhaps have made more sense. After all, it’s not as though the company have tried to duplicate the JD‑800’s original interface and user experience.

The JD‑800 Model Expansion resurrects a unique and unashamedly digital synth from Roland’s past, usable with Zenology on a computer via Roland Cloud or with compatible Zen‑Core hardware.