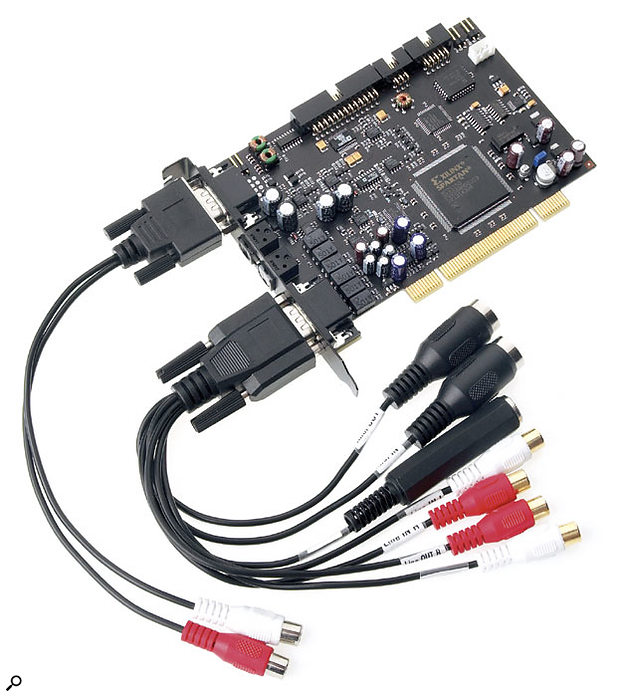 RME's latest PCI soundcard is their first to support 192kHz sample rates, and offers a different balance of features compared with their existing Hammerfall cards.

German manufacturers RME are well known for their highly regarded and expansive range of soundcards and converters. Recent additions to the Hammerfall DSP System soundcard range include the HDSP 9652, which was reviewed in SOS July 2003, and the HDSP 9632, which is the subject of this review. In fact, there is a lot of commonality in the technology and applications of these two cards, so to avoid repetition I'll leave out some of the shared features which were covered in Mark Wherry's review of the 9652.

The HDSP 9632 is claimed to be "the world's most versatile PCI audio interface", and it provides a useful variation on the HDSP theme, using the same basic technology as the other cards in the range. While this card has fewer channels than the 9652, for example, it includes stereo analogue I/O and also supports all the standard sample rates between 32 and 192 kHz — thus contradicting RME's previous policy of deriving the model number from the maximum sample rate...

This new PCI soundcard incorporates the latest generation of 192kHz, 24-bit converters and claims a pretty respectable 110dB signal-to-noise ratio. As you might expect, all of the inputs and outputs through the card (a maximum of 16 channels) can be used simultaneously, and there are a variety of optional expansion units which can be added using a simple ribbon cable link system to extend the interfacing. These add-on cards (see box, left) do not require additional PCI slots, but do take up backplate spaces in the computer, which will usually prevent the corresponding PCI slot from being used anyway.

Of course, at such high sampling rates clock stability is paramount and the HDSP 9632 features a brand new clock recovery circuit called Steady Clock. This bespoke clock technology is designed to provide the maximum jitter suppression of external digital sources, yet retains full varipitch capabilities. The specification claims better than 1 nanosecond of jitter in its PLL mode (ie. when synchronising to an external digital source), and 800 picoseconds when running on its internal clock.

The card plugs into a standard PCI 2.1 slot and interfaces to the outside world via two D-sub connectors and a pair of optical ADAT lightpipe ports on its rear mounting plate. The ADAT optical I/O supports eight channels of 48kHz digital audio as standard, or four channels of 96kHz through the S/MUX format. The connectors can also be switched under the operating software to run as stereo Toslink S/PDIF interfaces, if required.

Two breakout cables are included with short tails extending from the D-sub connectors to conventional audio connectors. One breakout cable provides access to the analogue I/O from a 15-pin D-sub, and the other provides the S/PDIF digital I/O from a nine-pin D-sub. The S/PDIF digital I/O terminates in a pair of phono sockets, and is theoretically able to support 192kHz sample rates — although this will require high-quality (and short) cables! Alternatively, a balanced XLR breakout cable is available, providing the electronic digital I/O in AES-EBU format.

On the review model, the analogue breakout cable provided balanced stereo analogue inputs and outputs on XLRs, plus a headphone output in-line socket, and MIDI In and Out sockets. The XLR cables are actually a cost option, and the basic version of the card comes with unbalanced breakout cables using phono connectors. The card's input and output operating levels can be configured independently, there being three options including the familiar +4dBu and -10dBV standards. The +4dBu mode aligns this analogue reference level to -9dBu, which is a fairly modest amount of headroom! For more unpredictable recording events, a 'lo gain' option configures the headroom halfway between EBU and SMPTE recommendations, equating 0dBfs with +19dBu.

The HDSP 9632 is also supplied with an updated version of RME's Totalmix real-time DSP mixer/router software, which essentially provides a 512-channel audio mixer operating with 40-bit internal resolution, for latency-free monitoring of any selected inputs along with replay tracks and card outputs. This is a neat and pragmatic solution which will negate the need for an external (monitor) mixer in most situations. The mix can be auditioned on any selected main outputs or the headphone output, as appropriate. The latest version includes new Matrix and Multiwindow views and supports AC3 surround sound data when replaying DVDs, for example.

Like its siblings, the HDSP 9632 operates with RME's 'ASIO zero CPU load' technology, performing much of the audio processing on the internal DSP rather than the host processor. I say DSP, but in fact — like its siblings — this card employs an FPGA instead of a conventional DSP chip. The arguments for and against the FPGA alternative to a standard DSP are too involved to go into here, but RME believe that this approach provides a more flexible solution in this specific application.

The unmarked software CD-ROM carries drivers for Windows 2000 and XP (with full multi-client operation of MME, GSIF and ASIO 2.0). The latest version at the time of this review was v2.62, released in August 2003, and one of the more significant bug fixes in this version is that the ASIO multi-client driver is now compatible with Sonic Foundry's Vegas. Although not supplied on the CD, Mac drivers were available from the web site, including the v1.1 Mac OS X drivers. Also included on the disc was the Digicheck and Meter Bridge software (see below), a flash ROM updater program, and the 41-page manual in Adobe Acrobat (PDF) format. Although the software and hardware seemed perfectly stable during the review, the inevitable driver updates can be downloaded from the company web site. Furthermore, the 'Secure BIOS' technology ensures that should a firmware update fail, the card will continue to operate from a backup ROM until the Flash EEPROM is correctly updated.

The HDSP 9632 supports all of RME's existing Expansion Boards (EXB) providing alternative or additional physical I/O interfaces. The standard audio boards accommodate sample rates to 48kHz and include the AEB4I, AEB8I, AEB4O and AEB8O (which provide four or eight analogue inputs or outputs, respectively), as well as the TEB board with its TDIF interface.

However, to complement the high-sample-rate facilities of the HDSP 9632, two new cards have been added to the range. These are called the AI4S 192 input and AO4S 192 output expansion boards, each of which provides a backplate connection panel with four TRS jacks offering additional I/O with the same specifications as the onboard 192kHz converters. These interfaces are balanced and can be configured for three different operating levels in the same way as the main board. With these two new interface cards fitted alongside the HDSP 9632, the system can provide up to six analogue inputs and/or outputs, all with 24/192 resolution.

The configuration menu is the same as that for other HDSP cards, and is very clearly laid out, with simple radio buttons to select the various options in a kind of multiple-choice menu. All of the settings are adjustable in real time and can be accessed from the icon which resides in the taskbar of the host PC. The menu is divided into four sections, with the first providing eight different buffer/latency options ranging from 1.5 to 186 ms. The next configures the S/PDIF input and output sources and modes (optical, co-ax, internal or AES in the case of the input, and optical, professional, emphasis and data options for the output). The clock mode and preferred sync options are next, followed by the input, output and headphone operating levels. Status areas at the bottom of the menu window show the selected input signal, clock mode and sample rate, to provide at-a-glance confirmation that all is as it should be.

Support software supplied with the card included the HDSP Meter Bridge with its scalable metering facilities, and Digicheck — a suite of analytical tools including a spectral analyser, two, eight and 16-channel metering (with an oversampling mode in the pre-release v4.0 available on the web site), a goniometer (vectorscope) display, status bit translation, and so on. The data processing is all performed by the card's own DSP, so these tools add no additional strain on the computer's processor. The card also incorporates Track Marker Support (TMS) which recognises CD and DAT start IDs and CD subcode information and enables it to be transferred.

Installing the HDSP 9632 was simple enough, both mechanically and software-wise, and although I didn't need to perform a firmware update, previous experience of Hammerfall cards would suggest that this is a pretty straightforward process should it become necessary.

The card is easy to configure and use, and performs admirably, at least at the base and 2fs sample rates I tried it with. Personally, I have a hard time justifying 192kHz sample rates from either a technical or an acoustic standpoint, but if you feel it is important, this card is one of relatively few that currently supports the format.

Other than the sample-rate facilities, the main deciding factor for a card like this is the amount and configuration of its interfacing. The highlights here are the dedicated headphone output and the particular combination of ADAT, S/PDIF and stereo analogue, and if this combination suits your needs the HDSP 9632 can be heartily recommended. For those interested in surround sound, adding the optional AI4S 192 and AO4S 192 expansion cards to the 9632 will even provide full 5.1 analogue interfacing with 192kHz sample rates.

The new Hammerfall DSP soundcards are all impressive, and this version offers a blend of features and facilities which differentiates it clearly from its siblings, supporting sample rates up to 192kHz.