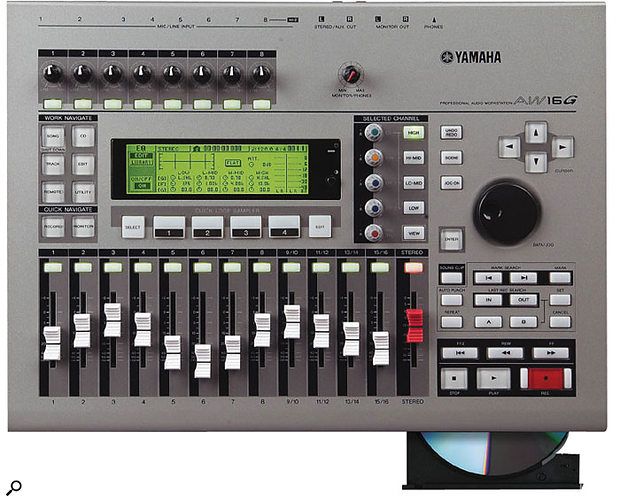 When sync'ing external MIDI gear, the Yamaha AW16G can act as the MIDI Clock master but not as the slave.

I have a song recorded as a MIDI sequence on a Yamaha QY700 hardware sequencer which I'm trying to record onto a Yamaha AW16G. I have the QY700 slaved to the AW16G using MIDI Clock, so that when I start and stop recording on the AW16G, the QY700 starts and stops in sync. This works well except towards the end of the song, where there is a slowdown in tempo programmed into the sequence on the QY700. At this point, the tempo display on the QY700 indicates that the ritardando occurs as it is meant to, but the AW16G continues recording at a steady 140bpm. I've tried slaving the AW16G to the QY700 using MIDI Clock, but cannot seem to get this to work. I've also tried setting the QY700's MIDI ports to MTC, with the AW16G set as an MMC slave, but this does not work either. Help!

Reviews Editor Mike Senior replies: The reason why the AW16G doesn't follow the tempo change programmed into the QY700 is that the QY700 is slaved to the AW16G, and not the other way round. MIDI Clock messages from the master machine fix the rate of quarter notes according to tempo settings on the master machine, not the slave. What you need to do is program any time-signature and tempo changes into the AW16G's tempo list — the manual will tell you how to do this. Once this is done, the tempo of the master machine will slow down towards the end of the track, and the tempo of the slave machine should then follow it.

Referring back to the original review of the AW16G in SOS October 2002 (www.soundonsound.com/sos/Oct02/articles/yamahaaw16g.asp), it seems that the multitracker can only act as the MIDI Clock master and not the slave, which explains your difficulties in trying to achieve this! It's not uncommon to find that less expensive multitrackers can only act as the master, but it's much better to work with the sequencer as the slave anyway, so don't worry about this.

The AW16G can however work as the master or the slave in the case of MTC and MMC data, if you wanted to take that route, though getting MTC to work is a little fiddly on the QY700. Also, it's probably worth mentioning that MTC and MMC are different things. MTC is MIDI Time Code, which is a timecode just like SMPTE. MMC is MIDI Machine Control, and this is a set of remote transport-control functions — things like Play, Stop, Fast Forward and so on. The two are often used together, and you'll have to use both to get the QY700 and AW16G sync'ing properly, but the protocols shouldn't be confused.

As an aside, if you slaved the QY700 to the AW16G using MTC, then the sequencer's tempo changes would remain intact on playback. However, the bars/beats displays on the two machines still wouldn't match up unless you programmed the AW16G's tempo list to match that of the QY700. This is because MIDI Time Code works in terms of hours, seconds, and minutes, not bars and beats. If your tempo changes on the QY700 are ridiculously involved, so you don't want to have to transfer them over to the AW16G, you might prefer to synchronise using MTC, if possible, and put up with the erroneous bars/beats display on the AW16G instead.