Q. Is it safe to run everything off one power outlet?

I'm about to move house and set up a studio in the spare bedroom with all my stuff, and I'm just interested in what the best use of power points is. Is it acceptable (and safe!) to run many plug boards (between 24 and 28 at least) from one outlet in the wall, or is it better to use all the available outlets around the room? I have quite a lot of stuff to power in one small room, and I am thinking about perhaps getting a power conditioner as well — I don't want to be responsible for burning down our landlord's house! 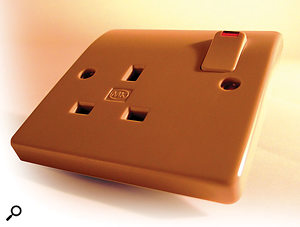 If you want to avoid ground loops, it's best to run all your music-making gear from a single mains socket (like this UK one, shown).

Technical Editor Hugh Robjohns replies: From the point of view of avoiding ground loops, it is best to run everything from a single socket, or from adjacent sockets if you have a double-socket outlet. This is a much better approach than running some gear from a socket on one side of the room, and other gear from a socket on the other side — a practice almost guaranteed to produce ground-loop problems!

If you are concerned about the total power you will be drawing from a single socket, you can reduce the load by plugging non-audio equipment into another socket in the room — desk lamps, phone chargers, kettles and so on.

If you're using plug boards to increase the number of available sockets, connect them in a star arrangement rather than serially. By that I mean you should connect one board to the wall socket, then plug the other boards into that first one, and then plug the equipment into this second 'layer' of boards. That way, the earth paths are kept as short as possible and in a star arrangement.

A single socket is able to supply around 3kW (230V x 13 Amps) and it is very unlikely that your domestic recording equipment will draw that much power — but every piece of equipment will have a label on it near the power connection that says what power (or current) it draws. If possible, try to balance the power demands on each plug board and make sure that all the fuses (in the plug boards and in individual plugs) are sensibly rated. Also, bear in mind that the first plug board has to carry the entire current load.