Q. How do I record from my guitar amp’s headphone out? Skip to main content

Q. How do I record from my guitar amp’s headphone out? 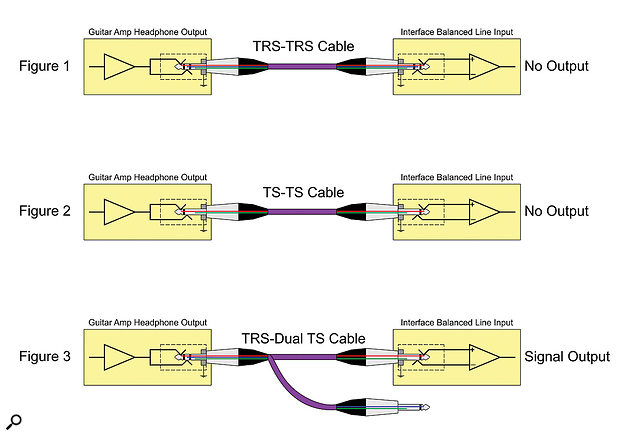 These are all jack-to-jack cables, but they’re not wired the same. To record from a headphone output to an audio interface’s input, you’ll usually need the bottom one, often known as a ‘Y–cord’ or ‘insert cable’.

I’m seeking some guidance on why I’m unable to record from my guitar amp straight to my audio interface. I’m working with two small amps, a Marshall and a Crate, and trying to record a feed from the guitar amps’ headphone outputs via a Focusrite Scarlett 2i2 interface. Originally, I thought that the headphone jacks on both amps might be broken, but when I plugged in a pair of Sony headphones, the sound came through perfectly clearly. Then I thought the issue might be that the headphone had a quarter–inch TRS connector instead of TS, so I just picked one of those up and tried to hook the amp up to the interface that way. No dice.

I’m not getting total silence, though — if I turn the amp up loud enough I get very crackly audio that sounds like it has a high–pass filter on it. Your guidance would be greatly appreciated!

SOS Technical Editor Hugh Robjohns replies: Although headphone amps aren’t technically the best output source for a recording, you should still capture something reasonable if using the correct cables. But the issue here is that the apparently similar quarter–inch sockets in the amp and interface are wired very differently, and therefore carry/expect differently formatted signals.

The headphone output is unbalanced and is wired to be compatible with stereo headphones, even though the guitar amp produces a mono signal. That means that the unbalanced amp output signal is wired to both the tip and ring contacts in the headphone socket, with a common ground on the sleeve. The interface input expects a balanced line–level signal, which means that it only responds to the difference between the signals on the tip and ring contacts.

With a TRS–TRS cable connecting the amp headphone output to the interface balanced line input, the signals on the interface tip and ring contracts are identical; there is no difference, and so there will appear to be no signal. All you’ll hear, as you describe, is the very small error signal resulting from an imperfectly balanced input amplifier, which is usually a very quiet hissy, spitty, toppy sound (see Figure 1).

With a TS–TS (instrument) cable connecting the amp’s headphone output to the interface balanced line input, there is no ring contact, and so the ring output terminal in the headphone socket is shorted directly to ground by the plug sleeve. Inside the amplifier, I suspect the headphone-socket tip and ring contacts are actually wired directly together (rather than having a true stereo output amplifier) since there is only a mono source. This means that the act of inserting a mono TS plug will actually short the entire headphone amp output to ground, leaving no signal to output to the interface at all! (See Figure 2.)

The only workable solution, if you want to record from the headphone output, is to use a ‘Y–cord’, which comprises a TRS plug at the amp end, and two TS plugs for the interface end. It’s often sold as an ‘insert breakout cable’ or a ‘stereo–to–dual–mono output splitter’ cable. When using this kind of breakout cable, the TRS plug provides the headphone socket tip signal on the tip of one TS plug, and the ring signal on the tip of the other TS plug. If you then plug one (or both) of these TS plugs into the balanced line input(s) of your interface, the balanced input circuitry looks for the difference between the signals on the tip and ring again, but this time the TS sleeve shorts the ring signal to ground, and the wanted headphone output signal is applied between the tip and ground, so all is well. (See Figure 3.) Hey presto! It will all work as you want and expect...