Q. What’s the best way to clip my drums? Skip to main content

Q. What’s the best way to clip my drums? 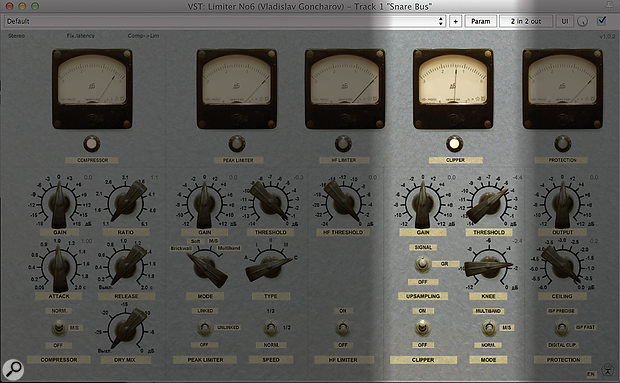 The Clipper section of Vladislav Goncharov’s excellent freeware Limiter No6 can be a really useful tool for certain drum sounds, even if that’s not what it was created for. Just be sure to turn off any other sections you don’t need — for example, the limiter can ‘soften the edge’ of drum transients before the sound hits the clipping stage.

I’ve read that I can get a good hip–hop kick or snare sound by ‘clipping’ it. But when I try this, it sounds horrible. What am I doing wrong?

SOS Reviews Editor Matt Houghton replies: Let’s be clear what we mean by ‘clipping’. Digital clipping, whereby the part of the waveform that exceeds the digital headroom is flattened, is difficult to achieve in your DAW by accident because there’s bags of headroom (as Hugh makes clear in his previous reply) but it’s possible if, for example, gain is applied to a signal before it hits an old, poorly designed plug-in. The reason this form of clipping sounds so bad is that the clipped section of the waveform is essentially a series of square waves, with strong, odd-order harmonics extending up beyond half the sample rate. These high harmonics aren’t supposed to exist in the digital domain, so they cause aliasing distortions at the D-A converter.

The ‘nice’ form of clipping you’re referring to was originally done by abusing the analogue stages of an A-D converter. When you clip in the analogue domain, the artifacts of clipping are all harmonics at frequencies higher than the fundamental: clipping a 100Hz sine wave would generate odd harmonics at 300Hz, 500Hz and so on. Any harmonics above half the sample rate were filtered out by the converter’s anti-alias filters, so there would be no aliasing. To work in this way, you must run out of analogue headroom before you run out of quantisation levels (‘digital headroom’). Some converters are designed like this and others aren’t, but quite a few (including on many audio interfaces) offer a ‘soft-clip’ facility, to ensure the device behaves in the desired way when clipping.

Today, you can achieve the same effect by recording your sound without clipping and then using a dedicated clipper plug–in such as the freeware Limiter No6 by VladG. (There are lots of other processors in this plug–in, and the key to success is disabling the sections you don’t need.) Such plug-ins usually include anti-alias filtering, to give an analogue-like effect.

Of course, not all sounds will benefit from being clipped, particularly those with a strong pitched element. Snare drums, hi-hats and cymbals are usually better candidates, as they all feature a strong noise component and little pitch information, particularly during the attack phase of each hit — the brief transient peak, which is really the only bit you’re looking to clip. It’s important to understand that the effect won’t work for every track, either, as clipping tends to give a sound more ‘bite’, which is not always what a track’s going to require. As with any creative processing t hat changes the tonality of a sound, you must use your ears.