Q. How do I set up acoustic treatment for recording vocals? 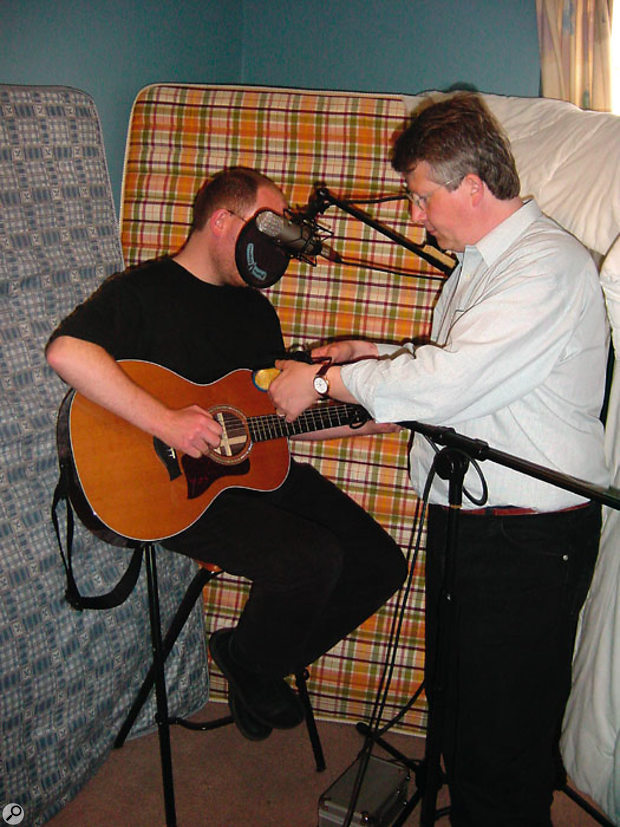 Placing acoustic foam, a thick duvet or, as seen here, some mattresses in a corner behind the performer helps to stop the reflected room sound from entering the microphone.

I'm looking to acoustically treat my home studio primarily for recording vocals. I've heard that putting acoustic foam tiles in the corner and singing towards the centre of a room is a good way of deadening a room for recording. But what sort of acoustic foam tiles would work best in this situation and how close could you get to the corner of the room without incurring unwanted low-frequency boost?

Technical Editor Hugh Robjohns replies: Most rooms have a reverberation time that is long enough to become audible when recording. Many are also rather overdamped at high frequencies but underdamped at mid-range and low frequencies, simply because of the kind of furniture, floor and wall coverings we tend to use in domestic rooms. Ours ears quickly adjust to or ignore these characteristics, but when listening to recordings made in such an environment they become obvious.

The simplest and most cost-effective way to overcome this is to come up with a way of stopping reflections in the room from entering the front of the microphone, leaving the mic's inherent directional characteristic to reject sound from the sides and rear, so a mic with a narrow and consistent cardioid pattern works best for this.

By placing absorbent material in an arc behind the vocalist or performer, usually around the corner of the room, any sound that would normally be reflected from those walls behind the singer back into the mic gets absorbed instead. Thus less reflected sound reaches the front of the mic and the recording sounds much drier than it otherwise would.

Acoustic foam tiles will work well — especially the thicker ones — but in practice we have found that a high-tog duvet actually works better, both acoustically and practically. A kingsize duvet works out a lot cheaper, it can be easily hung and later removed without damaging the walls, and it generally works over a wider bandwidth than most foam tiles will. The thicker and more absorbent the material, the lower the frequency it will work down to, and by spacing the duvet an inch or two away from the wall it will work to an even lower frequency.

This approach won't do much to sort out the problem of standing waves — you'll need proper bass traps for that — but if you are careful about where you put the mic and roll off some of the bottom end (which you usually don't need when recording vocals and most other acoustic instruments), it is possible to get some very good results indeed.

It is true that you tend to get a bass build-up effect close to the corners of untreated rooms, but in practice, by the time you have hung a duvet, installed a singer facing back out into the room, and placed a mic on a stand in a convenient location, the mic will not pick up any of that bass boost.

This technique, although very simple, generally sounds better than a lot of home-made (and even some commercial) vocal booths too!