Q. How should I connect my Access Virus and Yamaha RM1X MIDI gear? Skip to main content

Q. How should I connect my Access Virus and Yamaha RM1X MIDI gear? 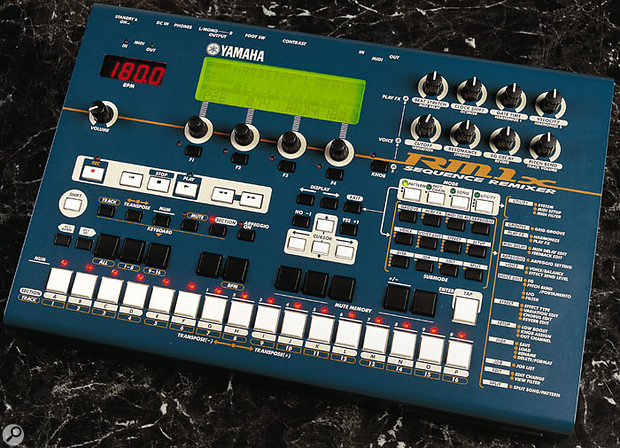 Although it only has one MIDI output, with the addition of a MIDI Thru box the Yamaha RM1X can be used to sequence an entire MIDI studio.

I'm having some problems with MIDI routing. I'm in the process of setting up a Yamaha RM1X sequencer, Alesis Micron and Access Virus synths, a Yamaha TG300 sound module and a Yamaha SU10 sampler. Could you explain how to set all this up so that the RM1X is sequencing the whole lot? Ideally I would like to use the Micron as both the controller keyboard and as a sound source. Any advice would be greatly appreciated.

SOS Reviews Editor Mike Senior replies: The RM1X has just the one MIDI output, so the first thing you'll want to do is invest in a MIDI Thru box so that you can feed this output to all the other devices. You'll need one with at least four Thru outputs. The Kenton FB5 would do the trick — it can route two separate inputs to two sets of four outputs, or a single input to all eight outputs — as would the recently discontinued Philip Rees V4. Connect the Thru box's outputs to the MIDI inputs of the other modules.

Once all the units are connected to the RM1X's Thru box, you need to connect the MIDI output of the Micron to the MIDI input of the RM1X, allowing the Micron to act as a controller keyboard. You'll need to switch MIDI Local Off in the Micron so that its keyboard doesn't trigger its own internal sound module directly — you only want its sounds to be triggered via the sequencer. Finally, make sure the RM1X is set so that it echoes information at its MIDI input to the relevant channel of its MIDI output according to the RM1X's track selection — this setting will be somewhere in the RM1X's MIDI Setup page in Utility mode.

If you want to hear all the sounds at the same time, you'll need to get yourself a small mixer. If you don't need any channel processing (EQ and so on), then take a look at the compact 1U line mixers available from companies such as MAM, Rolls and Behringer.

Using a MIDI Thru box has an additional advantage. If you don't want to have all your gear switched on all the time, you can switch off what you don't need without having to rearrange your routing. Furthermore, if you ever need to pull a sound module out of your rig temporarily for any reason, it doesn't affect the rest of the setup.