Q. How do you make only low frequencies mono?

SOS Technical Editor Hugh Robjohns replies: Assuming we’re talking about using the same high‑pass filter frequency and slope for both processes, the short answer is: yes, they are exactly the same thing. But you’ll probably want me to offer you a little more detail! 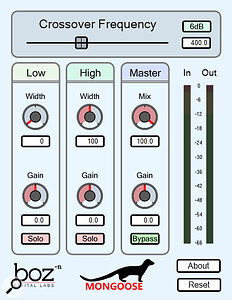 Most plug‑ins that allow you to narrow the bass frequencies or ‘make bass mono’ either employ Sides‑only high‑pass filtering or rely on Sides‑only level adjustment below a user‑specified cut‑off frequency. For example, Boz Digital Labs’ Mongoose, pictured, is at heart a split‑band Sides level control, with a stereo gain knob in each band.Audio signals carried over any stereo system can be described in two equivalent ways. We normally think and talk about the Left‑Right (L‑R) format but it’s equally valid to describe them in terms of their Mid and Sides (M‑S) components. Indeed, FM radio is even broadcast as Mid and Sides, which the radio receiver converts back to Left‑Right. Just as a reminder, the relationships between L‑R and M‑S rely on sum and difference matrixing, defined by the following simple algebra: Mid = Left + Right, and Sides = Left — Right. And going the other way: Left = Mid + Sides, and Right = Mid — Sides.

To derive mono from stereo you simply combine the left and right channels together, which generates the Mid component. Mono is a single channel, though, so clearly it carries less information than stereo, which has two channels, and something is always lost when converting a stereo signal to mono — when summing to mono you completely discard anything that was carried exclusively in the Sides channel. (That’s why, for example, reverbs tend to be noticeably drier in mono than in stereo.)

However, in most typical stereo tracks the Sides component is mostly carrying the left‑right spatial information for each source; the more widely panned a source, the stronger its Sides component. So, when a stereo track is summed to mono, a widely panned source is retained in the mix but it inevitably loses some volume compared with its level in the full stereo signal, because a part of the signal was carried in the Sides channel, which has been discarded.

‘Making the bass mono’ implies using high‑pass filtering to perform that left and right summing only for the low frequencies… with the inherent and inevitable result that any low‑frequency Sides information is discarded. Clearly, then, this is exactly the same as converting a stereo signal to M‑S and high‑pass filtering the Sides channel to remove low‑frequency Sides information before converting back to Left‑Right. In fact, the vast majority of devices which have a ‘make the bass mono’ mode actually achieve it in exactly this way internally, with simple M‑S processing.