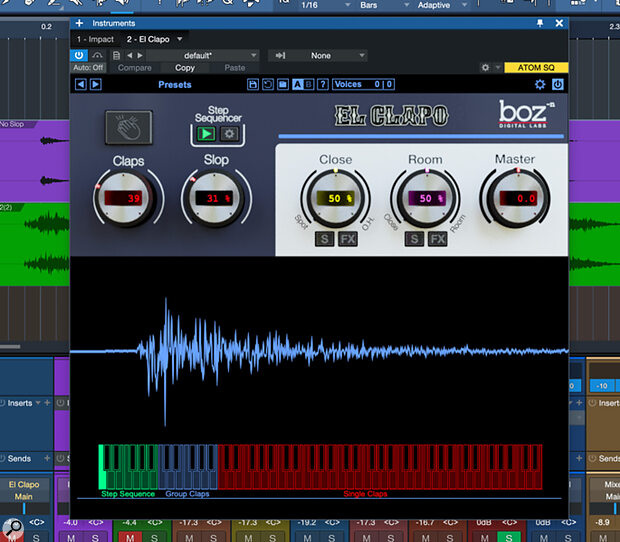 Sometimes the most familiar sounds are the hardest to get right...

No, no don’t turn the page! Seriously, you need this hootery of odd plug‑ins in your studio arsenal. Well, unless you’ve never used hand claps, boot stomps or finger clicks in any music you’ve recorded and never plan to. Then you’re probably good. For me, recording hand claps on my own has always been a bind because you have to stack a silly number of tracks for each part of the song if you don’t want obviously repetitive, cut‑and‑pasted results. I was ready for a better option and so were my sore mitts.

I bought Boz Digital Labs’ El Clapo as a solo product before the other two plug‑ins were released. The first time I tested it, I ended up giggling like a tiny child. It was both fun and sounded wonderful. Whether you want to emulate twee C86 winsomeness or massed metalcore crowd claps, this plug‑in will let you dial in the exact sound you want. Not ‘that’ll do’ or ‘ah well,’ I mean the exact sound, with a ridiculous degree of precision and realism. I was so enamoured of it that I ended up bunging superfluous claps on everything for a fortnight simply because I could. Now El Clapo has been joined by Das Boot and El Snappet, providing stomps and finger snaps/clicks, available for both Mac and PC in AU, VST and AAX formats.

A Round Of Applause

As El Clapo and its eccentric siblings share the same DNA apart from sound sources, the following applies to all three plug‑ins.

At the very top of El Clapo is a menu bar with preset selection, save button, voice info and advanced settings options. Under the advanced controls you can tweak MIDI velocity response, maximum number of claps, panning and timing of single claps and the number of round robins and layers (El Snappet and Das Boot add a pitch control too). Back in the main menu is a large dial, ‘Claps,’ with an inset readout to control and display number of claps. Above it, a manual clap button in case your keyboard isn’t handy. Next is the ‘Slop’ dial which controls how on beat the claps are. Above this are two buttons that control the built‑in sequencer, one to engage it and one for settings.

The next section features two large dials that adjust the ratio of close and room mics. Each mic type has a solo button underneath it and one marked FX that accesses a stereo width control, compressor and four‑band equaliser. Finally, there’s a master volume. Underneath this is a large waveform display and keyboard graphic showing you where to play grouped claps, sequences or single claps.

El Clapo claps with and without Slop.

With El Clapo you can play these individual claps up and down the keyboard, as other percussive plug‑ins offer. Indeed, if you slap your fingers down flammily, you can approximate group claps. However, the genius of El Clapo is that it automates this for you. Its lower octave offers different massed claps on single keys. Each time you play a key here, the clap samples are round‑robinned and timed differently too. The number of claps and how on beat they are is easily adjustable.

Crucially, the ‘Slop’ setting moves some claps slightly ahead of the beat as well as behind if you increase it enough, mimicking the imprecision of human timing.

In the adjacent screen you can see the waveform of claps smeared before and after the beat when heavy slop is dialled in, as opposed to the no‑slop versions. And, yep, I checked that happened whether using the built‑in sequencer or host MIDI triggering.

This is the key to El Clapo, tweaking the ‘Claps’ and ‘Slop’ dials soon ends up with convincing claps. But you don’t have to aim for realism. You can dial in some very surreal and disturbing sounds if you ignore the usual relationship between number of humans and tightness of timing. It’s totally up to you: El Clapo keeps out of your way and simply gives you complete control, as the best instruments do.

Their interfaces, though simple, give you fine control and you can rapidly get to any sound you want, realistic or not.

As you’re testing out group claps, you may notice that there’s a progress bar which activates each time you change either the ‘Claps’ or ‘Slop’ parameters. This is El Clapo pre‑rendering the massed claps to save processor power. However, you still don’t get machine‑gunning as these renders themselves are round‑robinned and layered, keeping the organic feel. 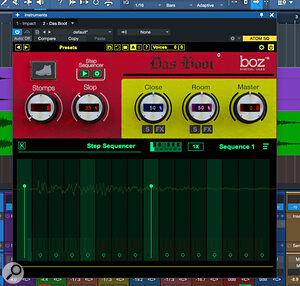 Le Snappet and Das Boot.The only issue I ran into is visible above in screen 2 on the track ‘MIDI Claps No Slop.’ You can see the audio sampled claps were slightly early even with zero slop set. I emailed the developer who replied promptly and correctly identified that it could be due to me adjusting settings whilst in play leading the plug‑in and host to have a slight disagreement. I only had this happen the one time and El Clapo was rock‑solid otherwise.

The presets are all very usable and feel... alive. There’s no other way to describe using El Clapo, there’s a spooky accuracy to the sounds. One of my favourite presets is ‘30 – Loose’. It’s eminently usable for many genres, without even fiddling with the compressor or EQ settings.

Moving onto Das Boot and Le Snappet, it’s all the fun I described above but with stomps and snaps respectively. Have you been trying to re‑create that Joe Meek stair stomp for years but you’re not a centipede? Now you can do it! Das Boot would also come in very handy for Foley work whether that’s a single person walking or a parade ground of soldiers. 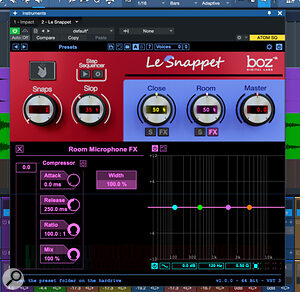 Can’t snap your fingers for toffee? Le Snappet is here! The single snaps are perfect for minimal, percussive‑lead pieces. With ‘Slop’ and ‘Snaps’ at maximum, we end up in a more sci‑fi, creature effect area that’s rather unsettling.

Once I had the bundle, of course I tried to re‑create Queen’s ‘We Will Rock You’ (have a look here: https://youtu.be/Z_e4oSAttY4) and I got damn close — that’s how tweakable and useful these instruments are. That must be emphasised; these are formidable instruments. Their interfaces, though simple, give you fine control and you can rapidly get to any sound you want, realistic or not.

If you need hand claps, finger snaps or foot stomps for either music, sound design or Foley, this bundle will easily cover all your needs.

Supremely powerful and tweakable plug‑ins that are eminently usable for music or sound design.