Q. How do you mic up a Sitar? Skip to main content 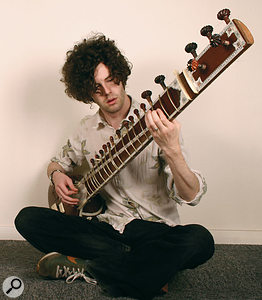 Hugh: First of all, I have to own up and say I've never actually been faced with this particular challenge, but even if I had, I'm not a fan of the 'mic placement by rote' idea. Every instrument is different, and so although there are many well known default starting points for different instruments, I would never simply plonk a mic on a stand where it says to 'in the book' and walk back to the control room. You have to listen to the instrument while it is being played, moving around it to find out where the best balance of sound can be found. Experience makes the task quicker, but it is still something I do every single time I place mics in the studio.

Paul: I agree, but you can arrive at a good starting point by placing a mic around 18 inches or 450mm or so from the gourd, without the mic being so far away that it picks up excessive spill from other sources. Remember that, despite its slightly 'different' concept, a sitar behaves much like any other stringed instrument, where the gourd (or gourds, on a double-gourd model) acts as a resonator to amplify the sound.

Hugh: Also, in general, every part of an acoustic instrument (especially a wooden one) contributes to the sound. So to obtain the fullest balance of sound, the microphone has to be placed sufficiently far away that it can 'hear' the whole thing, and that means roughly the same distance away as the size of the instrument's sound-making parts. Poor room acoustics or spill from other instruments playing at the same time obviously may make that ideal impossible to achieve, but it is a good starting point.

Paul: It's best to search for the sweet spot, just as you do with the acoustic guitar, by monitoring through closed-back headphones as you move the mic around. As the sitar is played seated, floor reflections will modify the sound, so experiment with mic height, as well as distance and angle from the sitar.

Hugh: But if that isn't practical, then you could put out several mics in the most likely sounding positions, and then record and listen to the output of each in the control room. This method also makes it easy to play back the options to the musician, so they can be involved in the mic selection and help to make sure you capture the sound they want to hear. As for microphone choice, I would assume it to be much the same as for an acoustic guitar. For me, that would mean a good-quality small-diaphragm condenser mic, or possibly a ribbon. If the room acoustics and spill allow it, an omni would give the most natural sound, followed by a ribbon with a figure-of-eight pattern. But a hypercardioid or cardioid will give better rejection of unwanted room noise.

Paul: Avoid mics with very pronounced presence peaks, and try to pick a reasonably quiet microphone. It doesn't need to be ultra quiet but something with an EIN figure of less than 16dB would be preferred. You can probably afford to switch in the low-cut filter to keep out vibrations and traffic rumble, as the low notes on sitars are well above the 80Hz that most LF filters are set to. If you have problems with spill, try erecting acoustic screens behind and to either side of the microphone, and also put absorbing material behind the player. Simple blankets or rugs behind the player will help, while a stand-mounted device that screens off the rear and sides of the mic will also be useful.

Here's a useful tip to consider if the sitar is being accompanied by tablas: use a cardioid condenser, angled away from the tablas, and improvise whatever acoustic screen you can between the two musicians to help reduce the inevitable spill. As long as you get enough separation to allow you to engineer a believable balance without having the room ambience intrude too much, you should be fine. If the recording is taking place in a good-sounding recording space, having an additional stereo microphone two or three metres in front of the performers will help you when you come to mix, as you can add in as much ambient sound as you need. If the stereo mic is more than around four metres away from the performers, you may need to delay the output from the close mics to avoid coloration when the signals are combined.