Q. How should I treat my project studio? Skip to main content

Q. How should I treat my project studio? 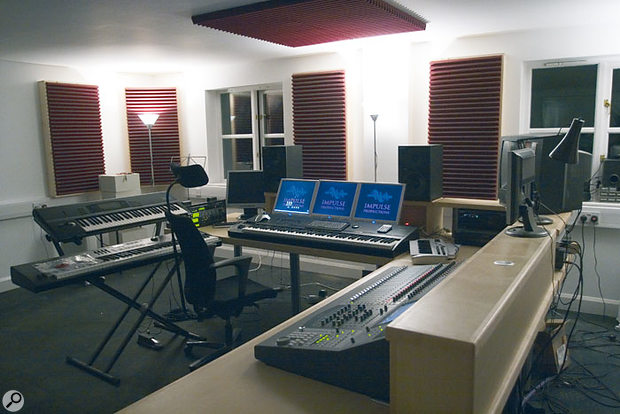 I'm just about to get started on quite a big project in my new home studio. I'm a bit concerned about the acoustics of the room, so I've been re-reading Studio SOS from July 2006 where Paul and Hugh sorted Hilgrove Kenrick out with some great acoustic trapping, and I'm thinking of making some myself. I just wanted to ask if you thought it would help in my situation.

My room is 4.6m x 4.1m, with a height of 2.4m. The walls taper in at a 45-degree angle about 30cm below the ceiling. The floor is covered in thin carpet, and there is one single-glazed window about 2m x 1m in the front wall. I can record instruments and vocals in the adjoining room if necessary, to reduce noise from my workstation (an Apple Macbook running Logic Pro).

But I'm more concerned about playback and EQ. I'm unsure about the best place to put the workstation, and I'm a bit worried about the listening environment; I'm not sure whether I'll be able to hear all frequencies correctly and therefore provide good-quality mixes. Do you think the traps and foam will help, if positioned in a similar manner to the article?

Editor In Chief Paul White replies: The traps we made for Hilgrove would certainly work in your room, and if you're willing to get your hands dirty with the manufacturing process, I'd start by making one for each side of the listening position and another pair to situate behind the speakers. As a starting point, try setting your speakers up around 18 inches from the wall and make sure they're angled towards your head, with the minimum of reflecting surfaces between you and them.

Your room's dimensions are a bit closer to a square than I'd like, but at least it is large enough that you won't need to sit too close to the centre, which is where the bass becomes most unpredictable. If you have space, add further traps in the corners of the room, again as we did in Hilgrove's studio. Alternatively you could put them between the wall and ceiling on the walls that don't have angled sections. 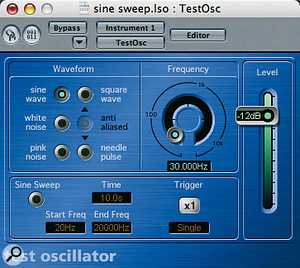 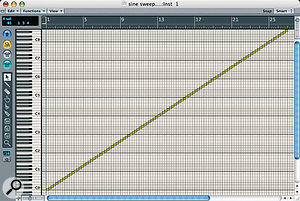 Logic's Test Oscillator (above) can be assigned as a source on an instrument track, then sequenced to play sine tones at semitone intervals, using the Matrix Editor, as shown below.

I wouldn't recommend using EQ to try to fix the monitoring, as it is rarely very successful. Instead, use your ears (and some test tones) to analyse the best placement for your speakers. This is a fairly laborious task, but one that's certainly worth the effort. Here's what to do.

Set up ascending sine-wave tones in semitone steps, starting from around 30Hz. As you have Logic Pro, you could use Test Oscillator, which is listed as a source on an instrument track, to generate these steps. Alternatively, you could open an instance of EXS24, which has a sine-wave tone as its default sound. You could, of course, use ES2 on an instrument track, and set up a sine wave on one of the oscillators (making sure the other two oscillators are switched off), but you must be careful to check that all modulations, LFOs, envelopes and, most importantly, velocity sensitivity controls are having no affect on the output.

All three of these options give you the flexibility to trigger the tones using a MIDI controller keyboard, enabling you to find out where the troublesome frequencies are at the point in the room where you play the keyboard. But sequencing a stepped sweep (as shown in the screenshot, bottom left) is a better option, as it allows you to listen to other parts of your room. When programming the steps, it's important to check that MIDI velocities are the same, and that notes don't overlap (if using ES2, set your sine-wave generator to 'mono' mode).

Once you've set up the sequence and ensured that there are no programmed jumps in volume, listen for excessively loud or quiet notes around the room. Moving your speakers further from or closer to the walls will change this, so look for the spot that gives the smoothest response. A further piece of acoustic foam on the ceiling directly above your knees in your normal monitoring position will help kill reflections from that source.