Q. Should I use my spare PC as a remote workstation?

My friend has just built a control room at the rear of his house, and he would like to set up a networked remote workstation in a room at the front of his house, which he is using as a recording space. We want the computer in the front room (which will be connected to a multi-channel audio interface) to transmit live audio inputs via LAN into the host computer, which is running Cubase in the control room. I realise that we could route the inputs along analogue cables to the host PC, but in this case we would like to be able to run just one Cat 5 network cable. I'm envisaging a system where a VST plug-in, running on the host PC, shows the audio signals being transmitted by the remote PC, in a similar fashion to FX Teleport. Is this possible? 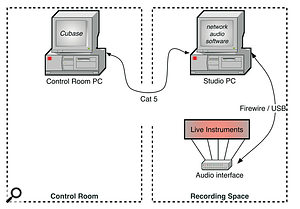 PC music specialist Martin Walker replies: If you've already got a spare PC and soundcard available, I can see why this idea occurred to you. One possible solution that would fit the bill is the Digital Musician Net software (www.digitalmusician.net), a free VST 2.0 plug-in that enables musicians in different locations around the world to collaborate 'live', all running their own computers and audio interfaces. Usually you would do this via an ADSL Internet connection, but I dare say you could also adapt it to a local network.

However, I can't help thinking that this approach is using a sledgehammer to crack a nut. While my August 2005 PC Musician feature on Spreading Your Music Across Networked Computers (available on-line at www.soundonsound.com/sos/
aug05/articles/pcmusician.htm) covered using a second PC as a simple stand-alone synth, or running software such as MIDIoverLAN, Steinberg's VST System Link and FX Teleport, none of these alternatives supports the running of live inputs on a remote PC. And there's a very simple reason for this: the last thing most musicians would want in a 'live room' is a noisy computer, and many already go to great lengths to get their computer out of the control room too! 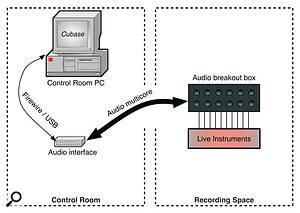 There are a number of ways to transfer audio from one room to another. One is to use a computer in each room and a networked audio transfer application, as illustrated on the left. However, this process will involve significant latency issues that can prove particularly tricky to resolve. The most effective alternative is to remove the second computer and use an audio multicore to connect the two rooms, as shown on the right. With this option, there are no latency issues encountered in the transfer of audio between the recording space and the control room.

Another problem when connecting live inputs via a remote PC would be additional latency. When you use a utility like FX Teleport to add the processing power of a second PC to the pool, the latency of its remote plug-ins is automatically compensated for while mixing, just like those on the master PC. However, your proposed live inputs would be delayed by the latency of the network, as well as the audio interface input buffers, and would all end up behind those on the master PC. If the musicians wanted to monitor existing tracks being played back on the master PC, these would also be delayed on their trip back to the live room via the network. While you could, no doubt, line up the tracks afterwards, I suspect you'd find it a very frustrating experience.

One alternative approach that also uses a single digital cable would be to install a Firewire or USB 2.0 audio interface in the recording space, connected to the host PC via a single long Firewire or USB cable. Many manufacturers offer software drivers that support three or four of their interfaces simultaneously, so with a suitably compatible audio interface in each room you could end up with a greater amount of inputs and outputs. These would, of course, be locked to sample-accuracy, there would be a complete absence of computer noise in your live room, and you'd be able to route headphone mixes to the extra interface's outputs for monitoring. One thing to consider with this option is the length of the cable you use. The official limits for both USB and Firewire cable lengths is around five metres, but you might get away with longer than this (there are plenty of companies advertising Firewire cables up to 120 feet if you look on-line); with a repeater box, to clean up and boost the signal, you could run much longer cables.

However, there's an even easier alternative, which you actually mentioned in your query: connecting the live room sources to unused inputs on the control room PC's audio interface via analogue cables. You dismissed this because you didn't want to run multiple cables, but you don't have to; the vast majority of recording studios use a single multi-core 'snake' cable containing multiple, balanced audio cores, terminated in a robust breakout box at the live end, and a set of XLR plugs at the other.

You can buy these in many formats ranging from two-way to 32-way and beyond, and despite their increased diameter over a single Cat 5 cable I can't help thinking this would be the best solution, especially as a 30-metre, 12-way snake would only cost around £100, and you could use a few cores to send monitor outputs to the live room.