Q. What is Microsoft Sound Mapper?

I use Sound Forge to record on to my laptop, and until very recently it's been working fine — until an error popped up when I opened the program. It said that the Microsoft Sound Mapper does not recognise or support this application due to rates and frequency settings. I have no idea what Microsoft Sound Mapper is. Could you guide me on how to solve this problem? 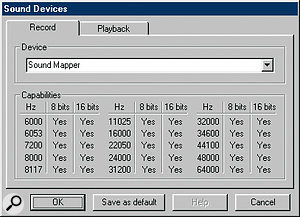 Now that the majority of audio interfaces have ASIO drivers, Microsoft's Sound Mapper device is almost completely redundant. However, in some cases it can be useful. For example, if you need to play old multimedia files, Sound Mapper can be used, as it can play back files with sample rates as low as 6kHz.

PC music specialist Martin Walker replies: For once, this is an easy question to answer, since the only way you can get a 'Microsoft Sound Mapper' error is if you've selected this named option in Sound Forge as either your recording or playback device. So to cure your problem just open up the Sound Forge audio preferences dialogue and specifically select your audio interface as the playback device. If you see several entries relating to your audio interface, always use the one containing 'ASIO' in preference to any MME-WDM ones, as they will provide significantly lower latency.

Microsoft's Sound Mapper (which sometimes appears in audio applications as 'MME-WDM Microsoft Sound Mapper' or simply 'Wave Mapper') often becomes the default driver for both audio playback and recording after you install a new audio application, and it may if you've recently installed a new audio interface. However, it isn't really a driver, but a virtual device installed automatically with Windows, which simply results in your application using whatever default devices you've already chosen for both sound recording and sound playback in the Control Panel's 'Sounds and Audio Devices' applet.

It can be handy to select Sound Mapper in your audio application to enable an audio interface to run audio files at sample rates other than those the interface supports. For instance, attempting to play back an old 8-bit/11kHz multimedia file on ASIO drivers will often result in an error message, because most modern audio interfaces only support sample rates of 32kHz and above at either 16-bit or 24-bit resolution. However, if you choose Microsoft's Sound Mapper, it will use Microsoft's various codecs (coder-decoder algorithms) to convert this sample rate and bit-depth on-the-fly to one that is supported by your interface. In days of old, Sound Mapper could also be used to play back 16-bit files on 8-bit only soundcards, or stereo files on mono-only soundcards.

This is certainly handy in an emergency, but except in these special cases choosing Sound Mapper can cause problems, because it may continue performing sample-rate conversion without telling you, even on files directly supported by your soundcard. Since no conversion is 100 percent perfect, this results in a reduction in audio quality, and some users have even reported clipping and drop-out problems after selecting it for playback.

Also, if you choose the Sound Mapper as a driver option you won't be able to access more than a single stereo pair, no matter how many inputs and outputs your audio interface has. If your audio software lets you highlight multiple drivers, including the Sound Mapper, this may result in error messages such as 'Format Info Not Found', 'Cannot open ACM Stream', or 'Error Closing Output File'. In short, musicians should stick with ASIO drivers, and avoid Microsoft's Sound Mapper in almost all situations!