Q. How is impedance balancing audio different from normal balancing? 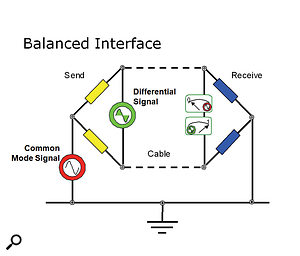 Differential Receiver: A balanced line has equal impedances to ground from both the hot and cold wires (yellow and blue resistors in this diagram). The wanted signal (green) is applied and received differentially between the two signal wires. The unwanted interference (red) is the same on both signal wires (common-mode signal), and is thus ignored by the differential receiver.

Transformer Both Ends: The traditional arrangement using transformers to create and receive the balanced signal. The two signal wires carry signals which are in opposite polarity, but are identical and equal in amplitude, both being half (-6dB) the total signal level.

Active Both Ends: Most modern equipment uses active electronics to create and receive the balanced signal. Again, the two signal wires carry signals which are in opposite polarity, but are identical and equal in amplitude, both being half (-6dB) the total signal level.

Impedance-balanced Send: Increasingly, manufacturers are using impedance-balanced outputs. The signal is still being transmitted differentially, but only the hot wire carries the (full level) signal. The cold wire is arranged to have the same impedance to ground to ensure proper common-mode rejection. This approach has fewer components and so is cheaper to implement, but it also ensures the correct signal levels are maintained regardless of whether the destination is balanced or unbalanced.

SOS Technical Editor Hugh Robjohns replies: The very short answer to the first part of your question is "yes”. The longer answer is, I'm afraid, a lot longer... There's a lot of misunderstanding on this topic, and the key point to comprehend is that the 'balanced' aspect of a balanced interface has nothing whatsoever to do with the shape of the waveforms present (or not) on each signal wire! The critical element of a balanced interface is the 'differential receiver' — the balanced input circuitry. This can be active (as most are, these days) or passive (as in a transformer), but the important point is that it works differentially. That means that it only responds to the difference between the signals presented at its two input terminals; it ignores anything that appears identically on both terminals (otherwise known as a 'common mode' signal).

That's the receiving or balanced input end of the system defined, so we can now consider how the wanted audio signal is dispatched from the 'balanced' source. Clearly, the wanted audio signal has to be presented as a differential signal for it to be recognised and passed on by the differential receiver. The old-school way of achieving that was with a transformer, in which case the signal on the 'cold' signal line has the same amplitude but opposite polarity to that on the 'hot' signal line. This is a 'symmetrical' balanced signal; both wires carry the same thing, but one is inverted with respect to the other. Moreover, because it is the difference between these two signals that is passed on as the wanted signal, the output will have twice the amplitude than either one individually, and so typically the signal on each line is half the required amount, or -6dB.

A lot of electronically balanced outputs emulate the transformer's symmetrical format, and thus work in exactly the same way. Typically there will be two active output drivers, one connected to the 'hot' signal wire, and the other to the 'cold' signal wire, the later typically providing an inverted version of the signal from the former. Both signals will normally be 6dB lower than the actual wanted signal, too, providing a useful headroom margin benefit!

However, this isn't always the most practical solution. For a start, this active electronic symmetrical format requires at least two output drivers and associated circuitry, making it relatively expensive. More importantly, if this electronically balanced output is likely to be connected to an unbalanced destination, typically only the signal on the 'hot' wire will be passed. This is inherently 6dB lower than it should be, and that can be inconvenient.

The 'impedance balanced' alternative is badly named, since all balanced interfaces are inherently impedance balanced! But what most manufacturers mean by this phrase is that the balanced output uses only a single output driver for the 'hot' signal line. A resistor of equivalent value to the output driver's impedance to ground is connected between the 'cold' signal output and ground, thus ensuring the correct impedance balance. With this configuration, the differential receiver at the balanced input sees lots of signal on one line and nothing at all on the other, but the difference between these is still the wanted signal, just as with the symmetrical approach, so it works in exactly the same way as any other balanced interface. The advantages are that it requires only one active output driver, not two (so it's cheaper to implement), and the hot signal is at the correct level to work as expected with unbalanced destinations. Consequently, you tend to find 'impedance balanced' outputs used for mixer aux sends and control room monitor outputs (and suchlike), where it is quite likely that an unbalanced destination might be found.

As for identifying from a block diagram which kind of output is employed, in many cases you can't. Hopefully the manufacturer will state in the manual somewhere whether the balanced outputs are configured as symmetrical or asymmetrical, and transformer or actively coupled. Sometimes the block diagram will show a transformer at the output, or a pair of output drivers (symmetrical), or a single driver with the cold side tied to ground via a resistor (asymmetrical)... but often they don't bother with that level of detail. In reality it really doesn't matter in practice much, because they all work in the same way and there's no significant quality difference between the two implementations. By the way, a lot of microphones with electronic outputs are actually 'impedance balanced', and few people, if any, ever notice — or care!