Q. How much impact can a CD transport have on sound quality? 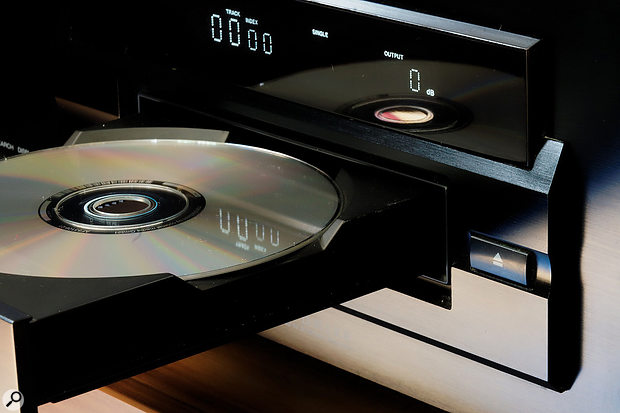 I’ve been looking for a compact CD transport [an audio CD Player with a digital output, usually with no on-board D-A converter] to hook up to my home-studio DAC and I’m surprised by how expensive they are — €1000 to €2000 isn’t rare and those aimed at rich-and-crazy audiophiles cost 10 times that. I can live with the idea of spending €1000 on a really nice DAC, or €2000 on really good speakers that will last the rest of my life, but shouldn’t it be entirely possible to make a decent CD transport for €250 or less? How much impact can a CD transport really have on sound quality (assuming there’s nothing wrong with the CD it’s playing)?

SOS Technical Editor Hugh Robjohns replies: Equipment prices in the audiophile market have always confounded and amazed me, but so too does your acceptance that a nice DAC should cost four times as much as a reliable disc transport! Have you ever really thought about what a CD transport has to do? A DAC is basically a little bit of etched silicon (albeit a cleverly designed one), glued onto a circuit board with lots of other little bits of silicon. Once these chips have been designed, the manufacturers can churn them out in the thousands for micro-cents, and the rest of the electronics are pretty cheap to build too. A lot of expertise is required to design a system in which all the elements come together in a way that achieves the desired level of performance, but we’re really only talking about good PSU design, effective grounding strategies, attention to clocking arrangements, and so on. It’s challenging, but it’s not rocket science!

Contrast that with a CD transport, which is, in my view, a miracle of intricate moving parts which need to be positioned precisely and continuously within fractions of a micrometre, with sophisticated servo-control circuitry, and elaborate digital processing systems! The data bumps pressed into a spiral within the CD have to be positioned under the laser beam and detector assembly at a very steady speed of around 1.4m/s (about 3mph, or walking speed!) and, since the bump spiral runs from inside to outside, the disc rotation motor has to vary its speed as the disc plays, from about 500rpm down to 200rpm, and that needs a sophisticated servo-control system.

The presence or absence of bumps within the disc is detected by a laser beam which is focused dynamically to a spot about 1.2 m across, and that laser beam has to be kept precisely aligned on the passing stream of bumps with the separation between adjacent spirals of just 1.6 m. Just to make things slightly harder, the spiral groove is probably also wobbling from side to side as the disc spins because the centre hole is probably slightly off-centre, and the horizontal plane of the bumps is probably also moving up and down too because the disc balance won’t be perfect either. So the laser focusing mechanism is continuously having to readjust the beam focus onto the moving surface. Consequently, the entire laser-beam generator and optical sensor assembly has to be motored across the surface of the disc while keeping the static laser beam precisely focused onto the moving spiral of microscopic bumps within the disc’s polycarbonate substrate.

If you scale these dimensions up a million times so that the bumps are about 1.2 metres wide — about the same as the width of the crash barrier down the centre of a motorway — the tracking servos in the laser assembly are performing the equivalent of flying a jumbo jet at three million miles an hour, while keeping the nose wheel aligned to within about 20cm either way directly above the central crash barrier as the motorway winds its way across the countryside.

So we are already talking about mind-blowing precision with unbelievably fast-moving targets — but it doesn’t stop here. The inevitable cyclical variations in the amount of power demanded by the tracking and focus servos can result in varying reference voltages in the digital, clocking, and analogue circuitry, if the transport’s power-supply system is not carefully designed. That can cause significant problems too, especially if the CD player has an on-board DAC. Prism Sound ran some fascinating tests in 1996 to find out why numerically identical CDs were perceived to sound different when played on various CD systems, and found that power-supply modulation problems played a significant role (www.prismsound.com/m_r_downloads/cdinvest.pdf).

If the tracking and focusing systems all work as they should, the photo-detector in the laser assembly will output an analogue signal with a varying brightness (light/dark) which represents the data pressed into the disc. That analogue signal is digitised (so the player needs an accurate word-clock generator) and passed to a decoder chip, which has to figure out how to unscramble the eight-to-fourteen modulation and CIRC encoding structures and pass the resulting binary data to an error-correction system.

When the CD format was designed, it was assumed that errors would be inevitable, so a powerful error-detection system was incorporated. Originally they expected short absences of data caused by pin-holes in the metal reflective layer (because the ‘sputtering’ technology wasn’t 100 percent reliable in the early 1980s), but it turned out that the real problems were caused by deep scratches and oily residues (fingerprints, marmalade...) on the disc, since these deflect the laser beam to a completely different part of the data stream.

In those cases, instead of a short gap in the recovered data stream the receiver gets continuous data, but sections of it are junk and don’t relate sensibly to the rest. Moreover, the beam deflections upset the tracking and focus servos in a major way, ultimately resulting in the familiar ‘stuck-groove’ effect we’ve all heard from scratched CDs.

When faced with such severe problems, the error-correction system can identify that there’s a problem, but the system isn’t powerful enough to correct it — the only option is to throw the confusing data away and take a guess instead: the error-concealment mode. Thankfully, audio tends largely to be cyclical, so a predictive approach to error concealment is surprisingly effective, and artifacts are usually fairly inaudible. Its failings become most obvious and dramatic on transient-rich and high-frequency components.

After all that, the (hopefully) accurate audio data is re-encoded into an S/PDIF signal and made available on an output socket for an external DAC, which has the relatively easy-peasy job of just turning it back into an analogue signal again.

DVD players have to work four times as hard as a CD transport because all the dimensions are smaller, and Blu–ray even more so! So it’s really quite astonishing that all that can be done for so little money, especially when you compare it with the cost of a high-end record turntable/pickup arm/cartridge or an open-reel tape machine, all of which employ, in comparison, very crude ‘tractor’ engineering!

As to the question, “How much impact can a CD transport have on sound quality?” the reality is that a poor transport could easily be making up large parts of the data if its tracking systems are not working well, forcing the error-correction system to give up and resort to concealing errors instead. The frustrating thing is that you’ll probably never know if it’s doing that because although the error-correction chips provide status flags to indicate how well they’re working, these are not usually brought out to the front panel for the user to see (other than in a few high-end and specialist machines).

A common problem is a susceptibility to mechanical and acoustical vibrations, which cause tracking and focus errors leading to uncorrectable data errors. There’s also the issue of power-rail fluctuation that I mentioned previously, and it may also have less than perfect clocking and so introduce interface jitter in the S/PDIF output. Of course, a good external DAC should be able to remove any interface jitter, but it can’t do anything if the data itself has already been corrupted through the use of error concealment.

The better-designed transports are designed to minimise these risks by using large, competent power supplies, to avoid any cross-interference between the different servo systems, the digital electronics and so on. They also have well-isolated and shock-mounted mechanisms so that mechanical vibration doesn’t affect the disc-reading process. The tracking and focus servos and all the associated mechanics and bearings are also of the highest standard and able to work quickly and accurately.

Different manufacturers use different mechanism designs, too. The original Philips idea uses a ‘swinging arm’ arrangement in which the laser assembly is mounted on an arm which pivots around a fixed post, tracing an arc across the CD much like a vinyl pickup arm. In contrast, many Japanese transports employ a ‘sled’ laser assembly in which the laser optics are moved along a couple of parallel rails. I’ve found the former to be far more reliable, because dust sticks to the rail lubrication in the latter, resulting in sticky ‘gummed-up’ regions at both ends of the sled’s excursion range over time, making longer discs unplayable towards the end. There are also different techniques used to keep the laser beam on track, with Philips again using a split-beam system, which seems particularly reliable.

So the cost of CD/DVD transports isn’t all that shocking, when you consider all that goes into them and all they have to do! When everything’s working well, the S/PDIF data from a cheap and cheerful transport will be identical to that from a properly engineered unit — that’s the beauty of digital audio. However, the problem comes when the going gets tough and the cheap transport fails to extract the disc information correctly. Its only option is to resort to making the data up through the concealment process, without telling you what it’s doing!

There are a lot of quite reasonable CD transports around in the £250-£500$350-700 range, while a decent DVD or Bluray player should be able to generate good CD data too, because they work to even finer tolerances, and they all seem to have audio S/PDIF outputs capable of feeding an external DAC.