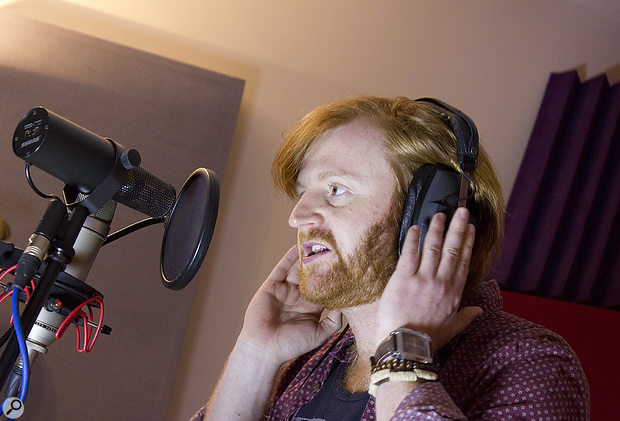 It’s fine to use cans while recording if that suits the artist, but there are very good reasons to avoid them, particularly when working with singers.

On Wikipedia, the musician Chris Thile is quoted as saying the following about the recording of How To Grow A Woman From The Ground (easily one of my favourite albums of all time): “Everything was tracked live, and I’ve decided never to record wearing headphones again unless I absolutely have to... because you’re in your own little world playing to a mix that no-one will ever hear but you. What’s the point?” I don’t get this. What’s wrong with headphones? I can see someone not wanting to overdub, but why not play with headphones? Surely he’s confusing overdubbing with recording with headphones?

SOS contributor Mike Senior replies: Actually, I don’t think he is confusing anything, and I also broadly speaking agree with him myself, for many reasons. What Thile is specifically saying here, as I see it, is that if he turns himself up in his own cans so he can better hear what he’s playing, for example, then he’ll likely undermine his normal musical impulse to project more strongly when his solo comes around. And that alteration in the normal balance of the performance may then have knock-on effects for the other players, and so on. The interactions that happen between expert acoustic performers is tremendously subtle, and based on their previous experiences of playing together. If you bring an ensemble into the studio and suddenly give them completely different balances than those they normally hear in rehearsal, then you’re asking for trouble — not just a less secure performance, but also a mix where the balances need masses more automation work to clarify.

But that’s not the only problem with headphones, by any means. For a start, for most musicians, the sound coming through the mic-plus-headphone chain will usually be a pale imitation of the acoustic reality they’re intimately familiar with, through hours and hours of practising, so when working on headphones they may find it difficult to control the tonal variables of the instrument with the same assurance they normally do. Then there’s the issue of monitoring latency to deal with in digital systems, which is often a problem in project studios — it’s not just a timing issue, either, because even the smallest monitoring latencies can trigger comb-filtering between the monitored signal and bone-conducted sound coming through the performer’s body, especially where brass/wind instruments and vocalists are concerned. And finally, separate headphone mixes can make natural communication between players rather tricky between takes, which makes refining arrangements and performances harder than it needs to be — and even if it doesn’t, for most people there’s something unnatural about communicating with people whose answers sound like they’re being beamed directly into your head!

To put it another way: what are the advantages of working without headphones? In my experience, it allows the technology to retreat into the background as far as the performers are concerned. They can play and interact the way they normally would during rehearsal, so their natural dynamics can be captured by the mics, and those same dynamics do half the mixing work for you. Now, clearly, project-studio recording sessions often have to diverge from that ideal for many practical reasons, so there’s no escape from using headphones in many situations. If you have a choice, though, I’d thoroughly recommend giving them a miss. If nothing else, think of the time you’ll save setting it all up!