Q. How should I align meters when working with both hardware and software? 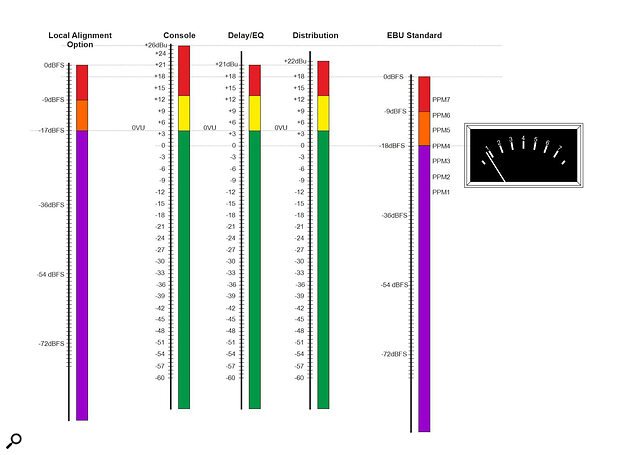 So, I know that I have to play a 1kHz tone in my mixer with the master set to read 0VU (+4dBu) on its meters, and that I can then adjust the delay and distribution system input levels so that their meters show their nominal reference levels too. I also know the maximum output level of each item of equipment and I’m assuming that this should equate to 0dBFS (digital clipping)… but they are all different! So which device should be my ‘anchor’, so to speak, and what dBFS should my digital PPM read at the end of the chain with that 1kHz, 0VU tone from the console?

SOS Technical Editor Hugh Robjohns replies: You’re over‑thinking this! It’s really quite simple: you just need to think of the analogue signal chain as a whole. The device that clips earliest is the one that defines the maximum capability of the whole chain, and that’s your delay/EQ unit at +21dBu. So if you want to make the digital system clip at the same level as the analogue chain, +21dBu is the maximum permissible analogue peak level. Your console’s reference level (0VU) is +4dBu, which is 17dB below the maximum allowed peak level, so your 1kHz tone at +4dBu should be aligned to read ‑17dBFS on the digital meter.

However, while this will work perfectly well, it is a ‘non‑standard’ analogue‑digital alignment. The European Broadcast Union (EBU) specification calls for the analogue reference level to align with ‑18dBFS — giving fractionally more headroom than your configuration offers. The reason the EBU selected this apparently obscure value stems from two factors. First, as broadcast audio inherently has a carefully controlled dynamic range it requires only a modest headroom margin and, second, the analogue PPM meter traditionally used to assess signal levels intentionally under‑reads on transients, so the headroom allowance must accommodate that.

European broadcasters traditionally work with an analogue reference level of 0dBu, and programme peaks must not exceed +8dBu (in the UK) or +9dBu (in Europe), as measured on an analogue ‘quasi‑PPM’ (peak programme meter) — a critical fact that is often forgotten! That (for historical reasons) the q‑PPM under‑reads on transients is not a problem in the analogue world, as the analogue clipping level would typically be well in excess of +20dBu. But for the digital conversion the EBU wanted to keep the digital signal as high as they practically could in the digital domain, while still retaining a sensible headroom margin to accommodate any high transients. It transpired that an extra 9dB of headroom above the +9dBu programme peak level proved sufficient, so the EBU standard alignment became 0dBu = ‑18dBFS.

If you so desired, you could achieve that in your system simply by deciding to operate your console with the slightly lower reference level of 0dBu instead of +4dBu. Obviously, this would also slightly increase the analogue system’s overall headroom and slightly decrease the signal‑to-noise ratio, but the restricted dynamic range of broadcast audio means both are irrelevant variations, in practice. You would have either to ignore the console’s VU meters or to recalibrate them so that 0VU = 0dBu. However, if you use a 0dBu reference tone and align the digital converters to read ‑18dBFS, everything will work just like any other professional broadcast installation.

It’s important to bear in mind that when broadcasters specify digital peaks to ‑9dBFS, that relates only to steady‑state tones, not programme audio.

Going back to that quasi‑PPM business, though, it’s important to bear in mind that when broadcasters specify digital peaks to ‑9dBFS, that relates only to steady‑state tones, not to programme audio — despite what some quality‑control departments sometimes try to claim! That ‑9dBFS figure comes from some simplistic maths without context. With the ‑18dBFS alignment, the analogue practice of keeping programme peaks below +9dBu (+8dBu in the UK) would appear to translate to digital peaks of 9dB above ‑18, which is ‑9dBFS. However, the ‘programme peaks to +9dBu’ mantra related to the signal being viewed on a traditional PPM and, as we know, PPMs deliberately under‑read transients. The EBU digital alignment of ‑18dBFS specifically builds in headroom to cope with transient peak signals, and a digital system can obviously accommodate signals all the way up to 0dBFS without issue. The current loudness normalisation requirements in broadcasting state that true peaks should be no higher than ‑1dBTP, and that small headroom margin is simply to protect against potential measurement error in true‑peak (TP) metering systems.