EQ: What Do All Those Knobs Do? 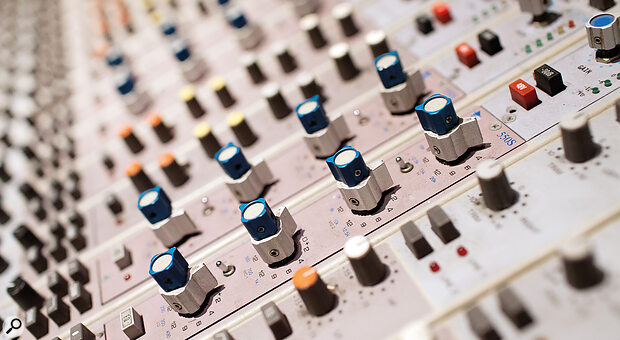 The right EQ settings can make a mix — and the wrong ones can make a mess. Our in‑depth guide will help you get more from this all‑important tool.

Record sound into a DAW, and it’s represented visually as a waveform. Zoom in, and you’ll notice repetition. Peaks and troughs of similar size and shape follow each other at regular intervals. Their spacing reflects the fundamental pitch or frequency of the note. Their height is known as the amplitude of the waveform, and the shape of each peak and trough reflects the timbre of the source.

The simplest waveform is a sine wave, which looks like a series of half‑ellipses. One of the basic facts that makes digital audio processing possible is that all other repeating waveforms can be described as, or reduced to, combinations of sine waves at different frequencies and amplitudes. In a pitched sound, the sine wave with the lowest frequency is known as the fundamental; the others are mathematically related to this and are known as the harmonics or overtones. 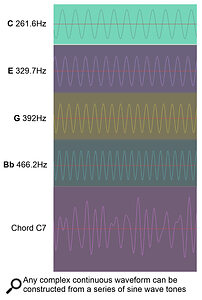 Mathematician Charles Fourier proved that any complex repeating waveform (in this case, a C7 chord) is the sum of multiple sine waves at different frequencies and amplitudes.

A recording of a typical piece of music will contain multiple fundamental notes and harmonics, all playing at once. The bass instruments might sound fundamentals as low as 30 or 40 cycles per second (Hertz), whilst the upper harmonics of the high‑pitched instruments will be well above 10,000Hz (10 kilohertz). Inasmuch as it consists of sustained, pitched material, what we hear as a single piece of music can always be broken down into lots and lots of different sine waves at different amplitudes and frequencies. That goes for full mixes just as much as it does for individual instruments.

When a recording fails to be true to the source, one common reason is that the balance between all of these different sine waves has been altered. A good example of this is the proximity effect. When placed close to the instrument they are recording, directional mics exaggerate the amplitude of the lowest sine waves. This can manifest itself as a muddy or boomy sound. There are many other ways in which the balance of frequencies within a recording can become skewed, either because of circumstances or the limitations of equipment. The idea of correcting — or ‘equalising’ — this imbalance through electronic means has been around almost as long as electrical recording itself. The term has remained with us, usually abbreviated to EQ, but the process itself has become a routine part of recording and mixing.

Nowadays, we don’t only use EQ to match the sound of a recording to that of the original source, but for many other reasons. Equalisers are everywhere: in the input channels of our mixing consoles, in dedicated outboard units and, above all, in software plug‑ins. They are applied to individual mics and instruments, to group busses, to the master bus and even to the monitor path to correct the failings of our loudspeakers and headphones. Equalisation is a transformative rather than an additive process, and as such, an EQ is almost always used as an insert, not on an auxiliary send.

Equalisation is a transformative rather than an additive process, and as such, an EQ is almost always used as an insert, not on an auxiliary send.

Another way of representing sound visually is a spectrogram: a two‑dimensional graph with amplitude on the vertical axis and frequency along the horizontal. Unlike a waveform display, a conventional spectrogram doesn’t have a time axis. It shows a single balance of frequencies, averaged over a time period. However, if we keep this time period short, we can continually update the spectrogram so that it follows the evolving content of the audio. This sort of animated spectrogram is now the standard form of visual feedback in many software equaliser plug‑ins, and is extremely helpful for understanding the way in which EQ acts on the sound. 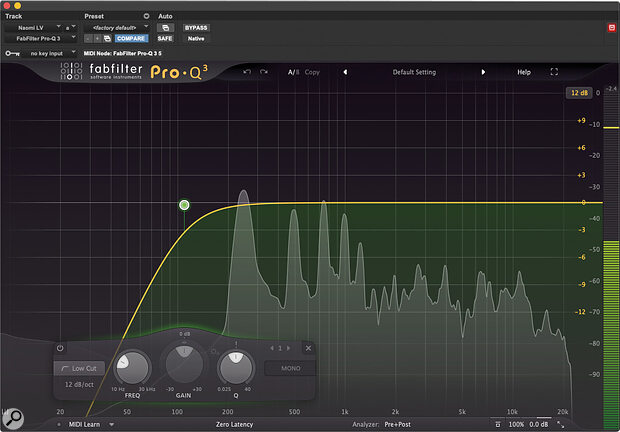 FabFilter’s Pro‑Q 3 is arguably the definitive ‘modern’ EQ plug‑in, with its animated spectrogram display and click‑and‑drag interface. In this screenshot, the spectrogram clearly shows a fundamental pitch at 250Hz and harmonics at 500, 750 and 1000 Hz.

We can display the action of the equaliser as a line running horizontally across the spectrogram. With the EQ doing nothing, this line will be flat, indicating that it’s not altering the amplitude of any frequencies within the overall sound. Where the line is not flat, it raises the amplitude of frequencies in areas where it’s above the flat, and reduces them where it’s below. On some software equalisers, the line itself is a control. The response of the equaliser can be set simply by clicking and dragging to change its shape.

Try this, though, and you’ll notice that there are constraints on the types of shape that can be created. The line cannot contain sharp corners, or vertical sections. The shapes you can create are invariably curved and, unless they go right off the sides or bottom of the graph, they’re usually symmetrical. When you click and drag in this style of EQ to change the shape of the curve, you are adjusting what in a more traditional EQ would be called a band. Modern software EQs can have an arbitrarily large number of bands, but in an analogue device, each band requires its own dedicated circuit. Analogue equalisers thus have a fixed number of EQ bands; and often, each band is of a fixed type. The three main types of EQ band used in mixing are filters, shelving bands and bell or parametric bands.

The simplest of these is the filter. Create a high‑ or low‑pass filter band on an EQ with the sort of graphical display described above, and you’ll see that one end of the EQ line now dives towards, or off, the bottom of the graph. A high‑pass filter (also known as a low‑cut filter) progressively reduces the amplitude of frequencies below a fixed point. A low‑pass filter (high‑cut) does the same with frequencies above a fixed point. The fixed point in each case is known as the cutoff or turnover frequency.

The two key parameters that can be modified in a filter are the cutoff frequency and the slope. Referring back again to an EQ with a spectrogram display, the latter is a very literally named parameter! The higher the slope setting, the more abruptly frequencies beyond the cutoff are reduced. The value of the slope is usually expressed in decibels per octave (dB/oct) and for reasons I won’t go into here, the options available are usually multiples of 6dB/oct. The steepest slope available in analogue designs is usually 24dB/oct, though steeper filters can be constructed.

Most mixers and EQs have high‑pass filters on every channel. Quite often, these are entirely preset affairs, with the only control available being an on/off switch. It’s cheaper for a manufacturer to build fixed settings into the design than to make them variable. However, this doesn’t mean all fixed filters are the same, so it’s worth consulting the manual for your mixer to find out what exactly your particular filters do. 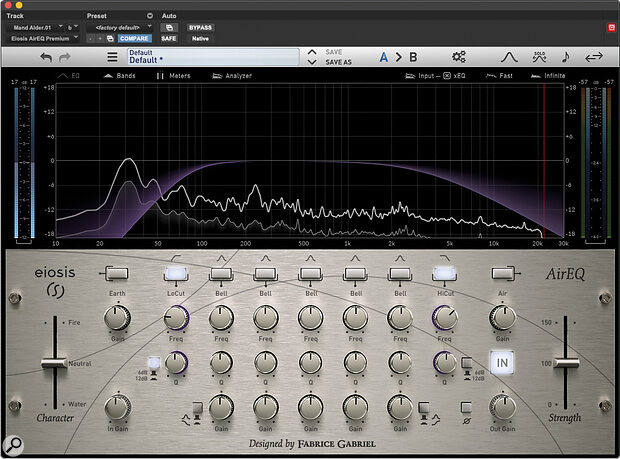 The effect of the slope setting is best understood visually! In this screen from Eiosis’s AirEQ, the low‑pass (high‑cut) filter at the right has been set to a gentle 6dB/octave, whereas the high‑pass (low‑cut) filter is operating at 12dB/octave.

Despite its simple nature, the high‑pass filter is arguably the only truly indispensable type of equaliser, and certainly the most important for corrective equalisation. Broadly speaking, it can be used for two functions. One is to remove unwanted low‑frequency noise whilst leaving the wanted signal intact. The other is to correct the balance of a recording where the low end is exaggerated. A typical example of the first situation might be to deal with a recording of an acoustic guitar where the player is tapping his or her foot. The fundamental frequency of the lowest note played on the acoustic guitar might be 80Hz or so, whereas most of the sound picked up from the foot‑taps will be at lower frequencies. In theory, by setting a high‑pass filter with a cutoff frequency at 80Hz and a steep (18 or 24 dB/octave) slope, we can reduce the unwanted sound without affecting the guitar sound at all.

By contrast, if the guitar has been recorded using a directional mic placed too close to the body, we may have a different corrective problem on our hands. Thanks to the proximity effect, that 80Hz fundamental and those of other low notes will be exaggerated, making the overall sound boomy and muddy. In this case, we want to configure our high‑pass filter with a much more gentle slope and have it turn over at a higher frequency — a 6dB/octave slope from 200Hz might not be a bad starting point.

Low‑pass filters are less commonly used in mixing, but they do have their place. For example, most guitar amp cabinets don’t produce a great deal of sound above 6kHz or so. So if a cabinet is miked up next to a drum kit, most of what is captured above 6kHz will be spill from the cymbals and snare; if this sounds bad, it can be removed using a low‑pass filter without affecting the guitar sound. There are also percussion instruments such as tambourines and shakers that generally belong in supporting roles in a mix, but are possessed of ferocious amounts of high‑frequency jangle. A low‑pass filter can help them to be audible in the mix without dominating it.

Most equalisers have just a single high‑pass filter per channel. And likewise, most have a single low and high band of shelving equalisation per channel. Often this is provided in addition to the filters, sometimes as a switchable alternative. Create a shelving band on an EQ with a spectrogram and you’ll immediately see where it gets its name: it offsets the EQ line by a fixed amount above or below its turnover frequency. Usually, you’ll be able to choose this frequency, and you’ll also be able to specify a level of gain in decibels. This sets the extent to which the shelf is offset from the flat part of the curve, with 0dB being off or inactive....