Q. How should I pan my multi-miked drums? 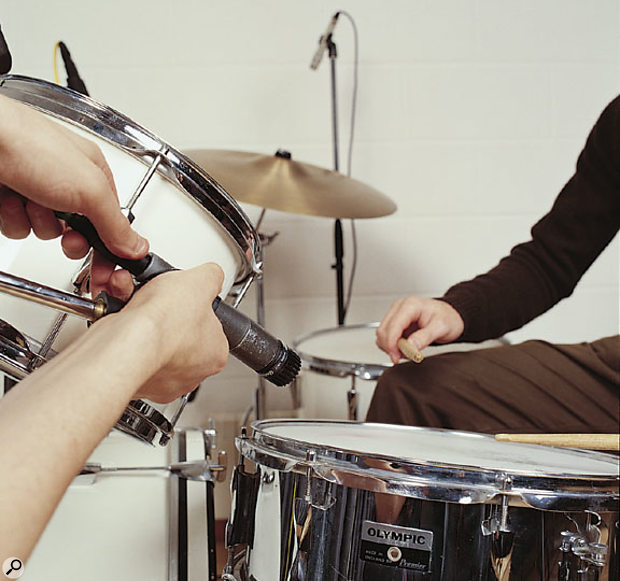 If you close-mike the snare, make sure the signal is panned to the same position as it occupies in the stereo image created by the overhead mics.

When recording my band, I'm in the habit of multi-miking the drums. I use individual dynamic mics on the snare, kick drum and toms and a pair of condenser mics overhead. Can you offer any advice on how to pan these sources to place them correctly in the stereo field?

Technical Editor Hugh Robjohns replies: Some engineers (and most recording drummers!) like to create a stereo image that reflects the drummer's perspective. However, it makes more sense to me to provide a more natural stereo image, as would be heard by someone in an imaginary audience. So, I normally arrange for the snare's spot mic to be panned slightly right of centre, for example. There is no absolute right or wrong to this though — no two drummers ever arrange their kits in exactly the same way, so how you arrange your drum sound is largely a matter of personal taste, convention, and musical genre.

I described how to match the spot mic panning to the overhead image in an article about recording drums in SOS February 2003, but here is the basic outline again.

Start by balancing the overheads, and panning them to create the required stereo image width. It is usual (although rarely essential these days) for the kick drum to occupy the centre of the image, so check this is the case in the stereo soundstage provided by the overheads.

The next step is to match the panning of each spot mic around the kit with its corresponding source's position in the stereo sound stage provided by the overheads. So, starting with the snare drum, listen critically to its apparent position in the stereo overheads, and pan the snare drum channel approximately to match. Now fade the snare drum spot mic up and down, and listen carefully to see if the apparent image moves as the fader is raised and lowered. If it does, adjust the snare channel's pan pot to compensate, and try again. With practice, this routine requires only two or three passes and is far easier to do than to read about here!

Once the snare has been panned to match the image created by the overheads, fade it out and repeat the process with each of the other spot mics in turn — hi-hats, toms, and finally the kick drum (which is normally dead centre anyway). With practice and a helpful drummer this whole process will take no more than a couple of minutes at the most, and the panning can be combined with basic gain structuring and rough equalisation too.

Once the panning has been sorted out, it makes sense to check the polarity of each spot mic against the overheads — you are looking for the setting that provides the fullest sound — as well as against each other (in case there is excessive spill between mics that might result in phase cancellations). A degree of compromise may be required in optimising the polarity settings of all the mics, although some judicious high-pass or low-pass filtering of some spot mics can help enormously.

Finally, with the overheads defining the basic drum image, fade up and adjust the level of each spot mic as necessary to 'fill in' the overall sound to create the required character, impact and perspective.