Q. How should I set up my compressor for recording vocals?

Can you tell me how to set up a compressor for vocals while they're being recorded, and again in the mix? 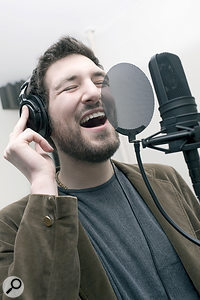 Compressing vocals during recording used to be standard practice with analogue recorders, and was important to avoid distortion being caused by unexpected peaks. Now that so many of us have access to 24‑bit digital recording systems allowing large amounts of headroom, we can choose to keep our options more open, and compress after recording instead.

SOS Technical Editor Hugh Robjohns replies: Assuming you're recording to a digital system using 24‑bit resolution, I'd advise not using a compressor on the recording pass at all. Instead, leave 10‑15 dB of headroom (ie. set the level so that peaks don't go any higher than about ‑10dBFS). The danger of compressing on the way in is that if you later decide you don't like the settings you used, it's too late to change them. In the days of tape, you had to compress on the way in, because the recorder's dynamic range wasn't wide enough to cope with raw vocal recordings, but that's not the case with modern digital systems.

If you're confident that you know what you're doing with a compressor and know the sound you're going to want, there's nothing wrong with compressing on the way in — some engineers still do, and it makes it easier to use outboard analogue gear in this way. However, I get the impression that you're not at that point yet. That being the case, it's far easier and safer to record flat, and compress later during the mix stage, when you know that your recording is a clean and faithful rendition of the performance.

The compression settings then depend on the effect you're trying to achieve and what else is going on in the mix. You can't set up the compressor without listening to everything else going on, but if you would like some ball‑park figures, ratio could be anything between 2:1 and 5:1, depending on how compressed you want it to sound and what 'knee' characteristic the compressor has. Threshold will depend on recorded levels and how 'squashed' you want the vocal to be. Attack and release times depend on the style of the track and the action of the compressor, but I would start with 1‑3 ms for the attack and 250‑350 ms for the release (or, better still, use the auto-release mode). Make‑up gain depends on how much you squashed the track and how loud you want it to be, but anything from 4‑15 dB is typical.