Q. Is there any point in DI-ing keyboards? Skip to main content

Q. Is there any point in DI-ing keyboards?

I've always stuck keyboards straight into my interface, desk or whatever: plenty of level, minimal noise (if any), and no hassle. Why use a DI box? Am I missing anything? 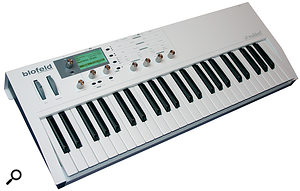 It's possible to connect the line outs of keyboards directly to the line inputs of your interface, mixer or recorder, and some musicians do. However, the best way to protect against ground loop, phantom power and faulty wiring problems that could arise, and even damage your equipment, is to connect the keyboard to a mic input, via a DI box, instead. If you go through the DI box to a suitable mic preamp, you can also benefit from the tonal colour the preamp offers.

SOS Technical Editor Hugh Robjohns replies: In the majority of cases, electric and electronic keyboards provide an unbalanced output at a level typically 10‑20 dB below standard line level. Not all line inputs are sufficiently sensitive to handle the output from keyboards effectively, but if your desk, recorder or interface has line‑level inputs with sufficient gain available, you can indeed connect your keyboard directly and get an acceptable signal.

However, given that many keyboards are not double‑insulated and therefore require a chassis safety earth via the mains power supply, in some cases there may also be ground‑loop problems. The only safe and practical way to cure this problem is with a coupling transformer of some kind. Line‑level transformer isolators are available, but are far less common than DI boxes, and the good ones are generally very expensive.

A DI box inherently contains a transformer and can be used to provide galvanic isolation, preventing ground‑loop issues. It also gives complete protection from phantom power. (There are some preamps and interfaces that allow phantom power to appear on supposedly line‑level and DI connectors! I came across a brand‑new one only a couple of weeks ago.) Phantom power can, and occasionally does, destroy the output stages of keyboards and other equipment, so taking simple steps to protect against an inadvertent accident might be deemed sensible.

Running a keyboard via a DI box has a number of other useful benefits. For example, some very early electronic and electric keyboards do work better into the very high input impedances (ie. well over 100kΩ) that a DI box provides, rather than the 10kΩ or so impedance of a standard line‑level input.

Another consideration is that most studios are well-equipped with mic tie‑lines and mic preamps, but less well with line‑level tie‑lines and line inputs — and unbalanced runs are more prone to interference and ground-loop problems than balanced runs.

Finally, mic preamps are capable of adding 'sonic character' to a sound through transformer, valve or solid‑state distortion artifacts, which may well be deemed beneficial and appropriate.

The bottom line is that unbalanced keyboards can often be connected to an interface or console directly without problems, but if there are signal or hum problems you'll have to go the DI or line‑isolating transformer route anyway. If the keyboard is faulty, you could even damage your interface or console because of the direct connection. If someone had removed the mains earth from their keyboard to stop it humming, for example, connecting its output directly to your interface or console could easily result in the instant and total destruction of the line input op‑amp and associated circuitry, and possibly the entire unit, because the ground‑rail would float up to 115V AC. Connecting a keyboard to a mic input via a DI box, by contrast, is inherently safe, for both keyboard and player, and the mic input, console or interface.

While I certainly have connected keyboards directly to line‑level inputs, it has only ever been when I've been 100 percent certain of their safety condition. Personally, I would never connect anyone else's (untested) keyboards to a line input without a line‑isolating transformer in the way, and 99.5 percent of the time I would use a DI box (active or passive, depending on the situation) and go via a mic input.