Q. How should you wire a four-core cable for two balanced signals?

I want to run two balanced microphone signals down one four-core screened cable, just to make life a bit quicker and easier on location. I intend to use five-pin XLRs at both ends, with short dual-XLR3-to-XLR5 splitter leads at each end. Are there any inherent disadvantages of doing this? Also, is it worth using double-screened cable, or would that be overkill?

SOS Technical Editor Hugh Robjohns replies: You can certainly use star-quad microphone cable for this application if you have some lying around, and it is commonly employed in the manner and for the purposes you describe. However, you have to wire it in a very specific way, with opposite pairs of core wires carrying each of the two signals to ensure minimal crosstalk. If you wire the cable correctly the crosstalk at 10kHz will typically be around -110dB, which is excellent, but if you get it wrong it will probably only be around -60dB! 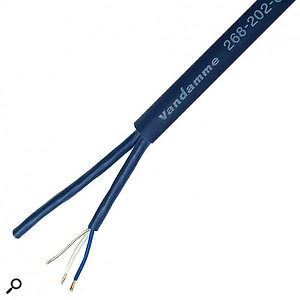 This Van Damme Blue Series cable has two separately sheathed screened-twin cables, making it easy to break two separate mic lines out into tails.So, using Canary or Van Damme star-quad cables, one channel would be carried on the two blue wires and the other channel on the two white wires — but that makes it a bit awkward to wire up, as you have to be careful about testing which wire is which before soldering into the connectors to ensure correct polarity. I tend to use the BBC-spec star-quad from Canford Audio in preference as that is much easier to use in this application, since the core wires are red/blue for mic A and green/white for mic B.

However, if you're going to buy cable specifically for this application, I would recommend Van Damme's Blue Series two-channel multicore microphone cable. This has two separately sheathed screened-twin cables within an overall jacket, and that makes it so much easier to break the two separate lines out into tails than when using star-quad. It also happens to be really nice cable to handle, and is no chunkier than standard star-quad.

I also use five-pin XLRs on long cables and for connecting the tails, wired with both screens on pin 1, mic A on 2 (hot) and 3 (cold), mic B on 4 (hot) and 5 (cold), which is the AES standard wiring specification. As for the double-screen question, some mic cables incorporate a double-screen where the inner cores are wrapped in a screen wound in one direction, with a second screen wrapped in the opposite direction on top (often called a Reussen screen). It provides better resistance to RF interference than a standard arrangement, but is more expensive and reduces cable flexibility. Reussen screens tend to be used most commonly on star-quad cables, since they work in concert with the star-quad core arrangement to minimise any interference affecting the wanted audio signal. However, unless you expect to be working directly under a mobile phone transmitter it is probably overkill. I have one drum of star-quad cables, and three drums of standard cables, and I rarely use the first!