Q. If speakers have to be 'anchored', why don't mics? Skip to main content

Q. If speakers have to be 'anchored', why don't mics?

As I understand it, loudspeakers create sound and momentum, which needs to be absorbed in order for the sound quality to be accurate, so we ensure they are braced or fixed to their stands and not wobbling about too much. So surely a mic diaphragm, which is moved by incoming sound, will less accurately represent the sound if the mic casing is not sufficiently anchored. Given that we hang these things from cables, or put them in elastic shockmounts, can you explain to me why this principle doesn't apply?

Is it just to do with acceptable tolerances or is it a trade‑off between picking up vibrations from the stand and capturing the intended sound?

SOS Technical Editor Hugh Robjohns replies: In a perfect world, both the loudspeaker and the microphone would be held rigidly in space to deliver optimal performance. However, we don't live in a perfect world. Sometimes a shelf is the most appropriate position for a speaker, but the inevitable down side, then, is that the vibrations inherently generated by the speaker's drive units wobbling back and forth will set up sympathetic resonances and rattles in the shelf, adding unwanted acoustic contributions to the direct sound from the speaker, and thus messing up the sound. 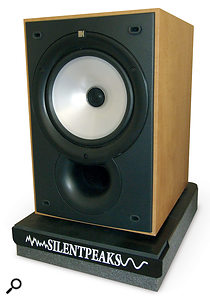 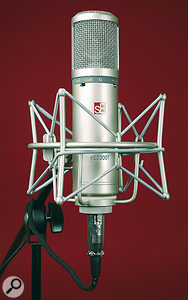 The obvious solution is, therefore, to 'decouple' the speaker from the shelf with some kind of damped mass‑spring arrangement optimised to prevent the most troubling and annoying frequencies (generally the bottom end) from reaching the shelf. This is often achieved, in practice, using a foam pad or similar.

Again, in a perfect world the mic would be held rigidly in space, using some kind of tripod, much like the ones photographers use for their cameras. However, in practice, we tend to place mics at the ends of long, undamped boom arms on relatively floppy mic stands which are, themselves, placed on objects that pick up mechanical vibrations (foot tapping, perhaps) and then pass them along the metalwork straight to the mic.

The obvious result is that the mic body moves in space, and in so doing forces the diaphragm back and forth through the air. This results in a varying air pressure impinging on the diaphragm that the mic can't differentiate from the wanted sound waves coming through the air, and so the mic indirectly captures the 'sound' of its physical movement as well as the wanted music.

The solution is to support the mic in a well‑designed shockmount so that the troublesome (low end, again) vibrations that travel up through the mic stand are trapped by another damped mass‑spring arrangement and thus are prevented from reaching the mic. If the shockmount works well, the mic stays still while the stand wobbles about around it, much like the interior of a car moving smoothly while the wheels below are crashing in and out of potholes!

The only potential problem with the microphone shockmount is that it can easily be bypassed by the microphone cable. If the cable is relatively stiff and is wrapped around the mic stand, the vibrations can travel along the mic cable and reach the mic that way, neatly circumventing the shockmount. The solution is to use a very lightweight cable from the mic to the stand, properly secured at the stand to trap unwanted vibrations.