Q. Should I be mixing in mono? Skip to main content

Q. Should I be mixing in mono?

I've read a lot of articles about the benefits of mixing in mono. So is pressing the mono button on your DAW's stereo output and turning off one of your stereo monitors the way to go? I've had a quick go from one speaker and mono switch, but it was a bit of a mess, to be honest! I've also read a lot on panning in mono, but I didn't think this would work.

Is it better to record in mono, pan, add effects, and mix to a single stereo master? The reason I ask is that when we recorded everything in mono it seemed to sit better than many stereo files fighting in the mix.

SOS Technical Editor Hugh Robjohns replies: There certainly are some advantages to mixing in mono. The main reason for checking the derived mono from a stereo mix is to make sure it still works for mono listeners, and there can be a lot of them. For example, a lot of portable radios are mono and all car FM radios automatically switch to mono whenever the signal suffers multi‑path problems or receives weak signals, which is surprisingly often in most places. Many clubs also play music in mono, and sometimes Internet files are converted to mono to reduce data bandwidth, or become near‑mono just because of the chosen codec.

So checking that the mix works in mono is a very sensible thing to do, and if you're going to do that, it is infinitely better to check mono on a single speaker, rather than as a phantom image across a stereo pair of speakers, because the latter over‑emphasises the bass end and stimulates more room reflections, which can be distracting and affect the perceived mix.

But what about mixing in mono? Well, it's generally much harder than mixing in stereo, but you'll get much better results for your effort. The fact is that when you mix in mono you can really only separate different instruments by using differences in their relative levels and spectral content. So achieving the right balance and applying the right EQ to separate sources, becomes a lot more critical: that's why it feels harder to do. But when it's right, it is very obviously right. 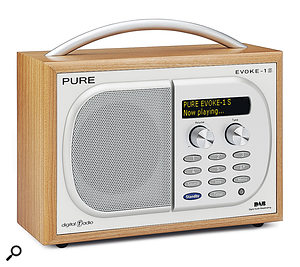 Even now that we have hi‑tech digital radio, a lot of listeners are still hearing a mono mix, as is the case for users of the Pure Evoke radio, currently one of the best‑selling DAB radios.

Conversely, when mixing in stereo you have the same level and tonal differences to help make the mix work, but you also have spatial position (panning). By panning sounds across the stereo image, you can make the mix sound great very easily, even if you have several near‑identical‑sounding sources. Yet, when that great‑sounding stereo mix is collapsed to mono, you will often find it no longer works, because those sources occupy the same spectrum and end up trampling all over one another.

However, if you can get the mix to sound good in mono first, it will definitely sound great in stereo too. I find it a lot easier and more satisfying to work in that way, although that's possibly partly to do with my formative BBC days working in mono. If you create the stereo mix first, it can be very frustrating afterwards to have to make it work in mono too.

Of course, the only problem with mixing in mono is what happens when you come to pan sources to create the stereo image. Panning a source will inevitably change its relative level in the two output channels. Depending on the panning law in use, this may also, therefore, affect the mono mix balance slightly. Since the mono balance is inherently more critical than the stereo balance, the result is that you end up having to work around the loop a few times. For example, you set up the initial mix in mono by adjusting the fader levels and, possibly, also using EQ to ensure each source occupies its own spectrum and doesn't trample over anything else. You then switch to stereo and pan the instruments to create a pleasing stereo image. This will usually modify the balance slightly, although you are unlikely to notice anything significant while listening to the stereo mix; it will still sound great. You then switch back to mono and, if you notice the mix has gone 'off' slightly, you can fine‑tune the fader positions to get the mix balance perfect once more.

Finally, check once again in stereo and print to master tape (or whatever!). In some descriptions of mono mixing, you'll come across the idea of finding the spatial 'sweet spot' for a source by adjusting the pan pot, while listening in mono. However, this is, quite obviously, completely bonkers! What you're doing in this case is fine‑tuning the mono mix balance by using the pan pot as an ultra‑fine fader, trimming the signal level by very small amounts. Sure, it may well make it easier to fine‑tune the mono mix, but there probably won't be much sense in the stereo image positioning when you finally do come to check the stereo mix. It's obviously far better to pan the sources while listening in stereo, so you can position them precisely where you want them, then revert to mono and fine‑tune the fader positions, if necessary, to make the mono mix work as well as it can.

Reverbs and some stereo effects can be tricky when you're trying to find a perfect balance in both mono and stereo. Almost all reverbs will sound much drier in mono compared to stereo, and so, usually, some compromise will be needed. If you adjust the reverb for a good sense of space or perspective in mono, it will often end up sounding a little bit too wet in stereo (although some people like it that way), and if you get the reverb sounding right in stereo, it will often end up a little too dry in mono. There's nothing you can really do about this; it's a fundamental issue with the way most reverbs are created and the way stereo works.

Narrowing the reverb width can make the differences less obvious — and some reverbs have a parameter to enable you to do this — but it also makes the reverb less spacious‑sounding in stereo. Some mix engineers like to pan mono reverbs with each individual instrument to try to maintain a better stereo‑mono balance, but it's a lot of extra work and I'm not convinced it sounds that much better anyway.