Q. What does the 'virtualization' PC BIOS setting do? Skip to main content

Q. What does the 'virtualization' PC BIOS setting do?

I was recently adjusting the BIOS settings on my PC, hoping to improve performance, and noticed the following option: 'Virtualization Technology — VMM can utilize hardware capabilities provided by Vanderpool Technology'.

What does this mean and, as a musician, should I be concerned with it?

SOS contributor Martin Walker replies: When Microsoft released Windows Vista, it was largely compatible with applications originally written for Windows XP, although some refused to run, and some of the earlier ones wouldn't even install. Since Windows 7 was built on the same code as Vista, it could have suffered from the same incompatibilities with older software, except that, this time around, Microsoft incorporated 'Windows XP Mode'.

This downloadable add‑on (www.microsoft.com/windows/virtual‑pc) runs in a separate window on the Windows 7 Professional, Ultimate or Enterprise desktop, much like another application, but, while in Windows XP Mode, you can access your CD/DVD drive, install applications and save files as if you were using Windows XP. This is because the add‑on is exactly that: a disk image of a pre‑installed and activated copy of Windows XP with SP3, along with 'virtualization' software. So, in effect, you are running the older operating system in a virtual environment inside Windows 7.

Once you've installed an application via Windows XP Mode, it will appear in both the Windows XP Mode list and the Windows 7 list, so in future you can open it directly from Windows 7. This can be a godsend to those who need to run some older applications, such as the PC version od Logic Audio 5.51, last updated in 2002. 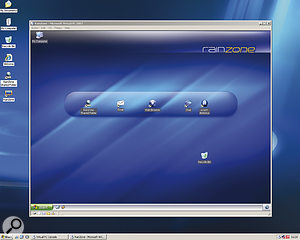 Here's an example of Microsoft's Virtual PC software helping the musician. Rain Recording's Solstice PC (reviewed in SOS October 2009) incorporates the 'RainZone', which is a virtual desktop environment incorporating web browser, email, chat and anti‑virus protection. As soon as you close down your Internet session, that instance of the computer disappears, along with any virus or other malware nasties, leaving your audio PC unaffected.

To run Windows XP Mode, you'll need at least 15GB of spare hard‑drive space, at least 2GB of system RAM and (until recently) a PC that featured HAV (Hardware‑assisted Virtualization) support. You'll also need Intel VT or AMD‑V functions in your processor, and an associated setting in your BIOS to complete the process by enabling these special functions. This is where your Virtualization Technology setting comes in.

Unfortunately, while most modern AMD processors include AMD‑V support, Intel's processor ranges are rather hit and miss, with some including VT support and some not. Thankfully, Tom's Hardware has a handy list (www.tomshardware.co.uk/windows‑xp‑mode‑virtualization‑intel,​news‑31047.html) for you to check. So, if a Virtualization Technology option appears in your BIOS and you think Windows XP Mode would be useful to you, leave it enabled: it won't make any difference to normal performance.