Q. My self-build PC isn't working. What tests can I run? Skip to main content

Q. My self-build PC isn't working. What tests can I run?

I left my recently completed self‑build PC running overnight to run a soak test. During the night it switched itself off, but the next day it came back on by itself, then switched itself off again, and a few hours later it did exactly the same thing. I'm beginning to think that either my new machine is haunted or something in its setup is going wrong. I'd really like to find the culprit!

Luckily, I've yet to install any software onto the machine — so what tests should I run before I do, to make absolutely sure it's operating correctly and safely?

SOS contributor Martin Walker replies: The most obvious culprit for a computer powering down is the CPU overheating and switching itself off to avoid long‑term damage. As for randomly switching back on, this is most likely due to the BIOS settings that determine the devices or specific events that can 'wake up' your computer, which, apart from more obvious things such as pressing the power switch, can also include activity of your mouse or keyboard, another USB or LAN device, or even an alarm function on the motherboard's real‑time clock.

However, you should check for and deal with any basic overheating problems long before you install Windows or any software applications, so here are some quick checks that you can perform within a few seconds of switching on a new PC for the first time. While this always tends to be a nervous moment, you don't need to simply hope for the best.

First, before powering up, check in the motherboard manual for the key press required to enter the BIOS (Basic Input/Output System): this is typically Delete, or one of the Function keys. Then, armed with this information and with the PC side panel off, power up for the first time, pressing this BIOS key every second or so, while simultaneously checking that all cooling fans have started to spin and that the Standby power indicator LED on the motherboard is illuminated.

If any fans fail to spin, or if you smell burning, or even see smoke rising from any component, switch off immediately and double-check all connections. If you hear any sequence of beeps from the motherboard buzzer then, once again, power down. The most likely reasons for this behaviour from the motherboard are a RAM error or CPU overheating (did you properly install the heatsink/cooling fan?).

Otherwise, within a few seconds your PC will finish its POST (Power‑On Self‑Test), checking all the devices connected to the motherboard, and enter the main BIOS screen. This in itself proves that your graphics card is working, that your CPU has been identified, and that at least some of your RAM has been recognised, but this initial screen may also show your connected hard drives and the amount of detected RAM. After you've glanced at these to check everything's OK, navigate to the page labelled 'Health Status' or 'System Monitor' where you should find readouts of all the PSU voltages, along with one or more temperatures.

Check that all the voltages are close to the stated values, and then watch the temperature readings. The motherboard temperature is likely to stabilise quite quickly somewhere in the 30s, while the CPU temperature should rapidly rise to somewhere in the 30‑ to 50‑degrees centigrade range while idling in the BIOS, but not significantly higher. If it does, the CPU fan isn't rotating, due to its either not being plugged in or there being an obstruction. The obstruction could be as simple as a cable preventing it from turning, or you may not have correctly applied a thin layer of heatsink compound. Watch the temperature for a few minutes to make sure it stabilises safely. If it does, it's safe to proceed to other BIOS tweaks and the installing of Windows.

Now when you reach the desktop you know that everything is basically running OK, and can perform more stressful tests to make sure your new PC will cope well under all conditions. Use a utility such as the freeware Prime 95 (www.mersenne.org) or OCCT (www.ocbase.com/perestroika_en) to torture your CPU at 100 percent while monitoring its core temperatures: they will rise, but ideally shouldn't get much above 60 degrees centigrade, and if they rise to over 70 degrees you need to beef up your cooling-fan regime. 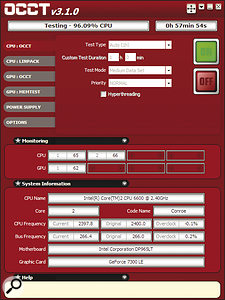 If you stress-test your CPU using a freeware utility such as OCCT, you can check that it won't overheat and power‑down your machine at an inopportune moment.

Once you're happy that the CPU stays within safe limits, boot your PC from a Memtest86 (www.memtest.org) CD or floppy disk and run it overnight to check that every bit of every byte of your RAM works correctly, so you don't discover a fault the hard way in the middle of a big project. Stay cool!