I don't have a lot of space or money, but I'm desperate to find a keyboard that I can use for fun and, possibly, for recording into a DAW. I'm quite serious about my piano playing, so I'd like something with weighted keys, but I need something that doesn't set me back too much (I have a few hundred pounds to spend) and doesn't take up much room. The technology seems to have moved on a lot since I was last looking around 10 years ago. What good options are on the market now?

SOS contributor Robin Bigwood replies: A capable electronic piano or gigging keyboard is a handy thing to have around in the studio or on stage, and you're right to say that the technology has moved on quite a bit in recent years.

Achieving all your aims is going to be a challenge, though. You're going to need a 76‑ or 88‑note keyboard, preferably with a hammer action, to get near the feel and flexibility of a real piano, and that's inevitably going to take up a certain amount of room. Then, finding something musically rewarding for a few hundred pounds really is a challenge. But there are various options available to you.

Right at the budget end of the market is the Yamaha NP30 (around £220) and M‑Audio ProKeys Sono 88 (around £320). These are lightweight, plastic‑constructed keyboards that don't have hammer action but play just fine for pop, rock and general use. They offer a handful of sounds beyond some perfectly respectable pianos: the 76‑note Yamaha has built‑in speakers and the M‑Audio even doubles as an audio interface. They're a long way from the cutting edge, but are useful and easily portable.

Squeezing a little more out of the wallet takes you up a rung in quality and road‑worthiness, and suddenly you're also in hammer‑action territory. The Korg SP250 (around £580) has been around for a while, but is still very attractive, with practice speakers built in and a dedicated stand thrown in for good measure. The Yamaha P85 (around £450) isn't dissimilar, but doesn't include a stand. For more of a real stage piano, with MIDI controller functions, the M‑Audio ProKeys 88 costs around £520, but its rather basic hammer action divides opinion.

If you already have a suitable computer, a lower-cost alternative to buying a dedicated digital piano is something like the M‑Audio Keystation 88ES, a full‑sized controller with weighted keys, plus the 99 Euro Pianoteq Play, a scaled‑down version of the excellent Pianoteq modelled instrument. 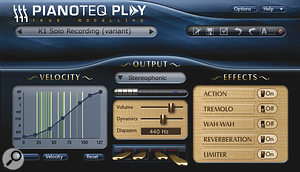 If none of these appeal, you can look at utilising your computer, running a virtual piano either as a stand-alone application or a plug‑in in your DAW, and driving it from a dedicated MIDI controller keyboard. What you lose in immediacy and portability, you more than gain in sound quality, so long as your computer is up to it. Ninety‑nine Euros buys you Pianoteq Play, a preset‑playback version of the full Pianoteq modelling instrument. Native Instruments' Alicia's Keys is a sample‑based Yamaha C3 for about the same money. And, for a few pounds more, you could try the wonderful Synthogy Ivory II Italian Grand, which gives you a Fazioli F308 without the six‑figure price tag. The cheapest 88-note controller is probably the weighted‑key M‑Audio Keystation 88ES at under £200. Beyond that, it's the rather clunky‑looking but very playable StudioLogic SL990XP (around £370) or the CME UF80 (around £400), both of which have hammer actions. The more affordable M‑Audio Keystation Pro 88 is now discontinued, but there are plenty about second-hand.