Q. Should I be time-aligning my drum tracks?

After recording my drum tracks, I spend some time aligning all the waveforms. As a matter of course, I align the overheads to the close top snare mic, then I align all the mics to the overheads. I finally flip the phase buttons so I get positive attacks on all the tracks (meaning I usually have to flip everything apart from the in/out kick mics and bottom snare mic). 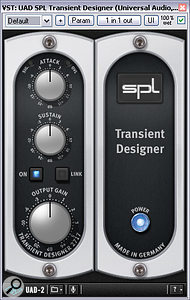 If you prefer not to time‑align the tracks in a multi‑mic drum recording, achieving adequate transient attack can sometimes be a problem. Fortunately, there are now numerous dedicated transient processors on the market that can help. Here you can see a small selection: Voxengo TransGainer, Stillwell Audio Transient Monster and SPL Transient Designer.

However, I was recently working with a very experienced recording artist who recoiled in horror at what I was doing, declaring that he knew no engineer but me who did this. With due deference, I returned the track timings to their original positions and reset the phase settings (though I left the snare phase flips), but to my ears it now sounds awful; the phase cancellations are killing the mix. So am I really alone in doing this kind of time alignment?

SOS contributor Mike Senior replies: In a word, no. By the same token, however, every engineer seems to have their own preferences in this regard, and I can understand that an artist might never have encountered such practices if he happened to have worked with engineers who didn't bother with time‑alignment, or else dealt with it only surreptitiously under cover of an unattended mixdown!

The reason for the lack of common practice is that a time‑aligned kit sound has different characteristics to one that has not been time‑aligned, so both tend to serve different goals. If you time-align, what you get is a more phase‑coherent attack to your most important drum sounds, and this can make it easier for them to cut through other elements of the mix. However, the danger is that the weight and body of your drum hits may then appear lacking by comparison, and you can find that this leaves more dynamics‑processing work to do at the mix.

The other problem is that time‑aligning the close‑miked drums can cause the overheads and room mics to pull those drums backwards into the mix. If you fade the room and overhead mics down to reduce this effect, the drum sound, as a whole, can then begin to sound rather anaemic and disconnected because of its reliance on the, typically, less natural‑sounding close mics. Once again, extra compression and/or reverb might then be needed to draw out a satisfying sound. 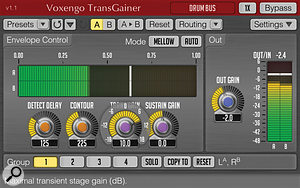 By contrast, if you leave time‑alignment out of your drum mixing process, you won't usually get the same transient smack that time‑alignment can provide, but the close mics may sound clearer and more up-front as a result of the time gap between their transients and the corresponding peaks in the overheads and room mics. In fact, producer Steve Albini has said that he occasionally delays his room mics artificially to increase this temporal separation.

The 'smearing' of the drum transients, which can result from a lack of time‑alignment, may also help make the drums feel more solid for a given subjective mix level, simply because each drum's combined drum‑mix peak is broader in the time domain and is also not as far above the level of that drum hit's sustain tail (compared with a time‑aligned drum mix). The down side is that you may struggle to achieve enough attack for some aggressive styles, unless you get busy with specialist transient processors on the close‑mic tracks. (There are lots of these to choose from, though, if you need them: SPL's Transient Designer, Waves' TransX Wide, Voxengo's Transgainer, Stillwell Audio's Transient Monster, Flux's Bittersweet... the list goes on and on.)

So, whether you time‑align or not, the result will always be something of a compromise; there are pros and cons of both approaches. What really matters, of course, is the sound in the context of the final mix, so the choice of methodology depends on which set of advantages you value most highly, and which set of disadvantages you can remedy most successfully.

One further thing to add, though: even without time‑alignment, phase issues still needn't make mincemeat of a drum sound. However, you can't expect to use some preset configuration of your channel polarity buttons, because the phase relationships between the mics are more complex than that. Much better to introduce each mic or mic pair into the mix sequentially (I typically start with the overheads and room mics), flipping the relevant polarity switch for the most solid‑sounding combination. Just make sure that you keep an ear on the entire line‑up of drum kit instruments while doing this, as adding a tom‑tom close mic, for instance, can easily affect the tonality of the snare or kick drum.

If the polarity buttons alone fail to satisfy your ear, try getting a phase rotator involved, to provide you with finer phase adjustments for the most critical close mics. There's the freeware Betabugs Phasebug, and there's also the better‑specified IBP Workstation from Little Labs, which has just been released for the Universal Audio UAD2 processing cards.