Q. Should I buy some ‘grot box’ speakers?

I've recently started learning to mix, and my current setup is an Apple Mac with an Echo Audiofire 2 interface. My monitors are Alesis M1 MkII actives fed via an SM Pro Audio M‑Patch 2. The M‑Patch has two outputs, though, so I was thinking of using the second one to send the signal to some grotty speakers to compare the mix against the sound from my main monitors. Do you have any suggestions? 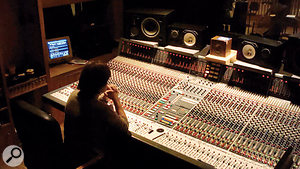 As you can see from this photo of Feist mix engineer Renaud Letang seated at a Neve mixing desk, 'grot boxes' — Yamaha NS10s and an Auratone speaker in this case — have a prominent place in serious studios.

SOS contributor Mike Senior replies: There are two main reasons to get 'grot box' speakers. The first is that they make you work harder to get a mix to sound good, so you'll push yourself to mix better; and the second is that by checking your mix through lower‑quality, consumer‑style speakers you'll have a better idea how it will sound when heard in typical real‑world listening situations. Two names tower above all others in the field of grot boxes: the Yamaha NS10 and the Auratone 5C, the former usually used in stereo and the latter often in mono. They don't quite play the same role, though, and in your situation the Auratone 5C (or something similar) would probably be a more suitable choice. Let me explain why.

Let's look at your current monitors. Just by nature of you having two speakers and two drivers per speaker, you have to listen within a physically quite small spot the whole time, to ensure that time‑delays between sounds arriving from the different drivers don't mess with your perception of the mix. (Without going into the mechanics of this, basically such time delays can result in misleading frequency and stereo‑image imbalances.) With a single speaker operating in mono, your listening position is much less critical and you primarily just get a little less high‑end as you move off-axis. You also won't get the distortion caused by speaker crossover electronics, which tends to be worst right in the most critical area of the mid‑range. While we're on the subject of speaker design, the Auratone 5C is also a closed‑box design (unlike your reflex‑ported Alesis monitors), which provides certain monitoring advantages. Check out Phil Ward's comprehensive discussion of this back in SOS October and November 2000 for some of those advantages.

A two‑speaker stereo monitoring system also delivers all the centrally‑panned sounds in your mix (which are usually the most important ones!) as a 'phantom image' hovering in the air between the physical speakers, and this image is far less stable in typical small‑studio systems than the images of sounds panned to the left and right of the mix, both on account of less‑than‑ideal room acoustics and by dint of the inevitably inexact tonal matching between the two speakers. In practice, that makes it problematic to judge questions of level balance on stereo systems. A single mono speaker has no such issues, and summing to mono also increases the level of central sounds compared to hard‑panned sounds into the bargain, thereby concentrating your attention on them. Of course, a large number of real‑world listening systems are in mono anyway, so it's as well to know how your mix will translate to those.

The size of the Auratone is a further advantage in focusing your attention on the frequency region of your mix that is most likely to reach the listening public intact. Much of the low end of a mix is out of range of many domestic and municipal speaker systems (which often use similar‑sized or smaller single‑driver designs) and almost all headphones, so bear this in mind when mixing, if you want your mix to translate to such systems. In particular, if bass instruments need to remain audible under such circumstances they must have enough energy up into the mid‑range, not just at low frequencies. Most real‑world listening systems also have limited high‑frequency projection, because HF is very directional and easily shadowed if a speaker is behind a pot plant or whatever, and the lack of 'air' you hear on an Auratone reflects that.

The problem with getting hold of an Auratone, however, is that they've been discontinued, so if you want one of the originals you'll need to scour eBay. You'll also need to budget for a power amp, as Auratone 5Cs are passive. For this reason, you might find it cheaper or more practical to go for a modern unit with an essentially similar design to the Auratone 5C instead, by which I mean a small single‑driver speaker without a reflex port. These aren't that easy to find, as most small single‑driver speakers tend to be ported, but there are a few. Passive contenders include the Pyramid Triple‑P and Avantone Mixcube, but you can also get powered models such as the new Avantone Active Mixcube, the Fostex 6301 and the Canford Audio Diecast Speaker.

The Console That Changed Mixing Forever
1 day 12 hours ago.