Q. How do crossovers work?

I'm doing an assignment that involves a section on crossovers. I get the general idea of what they do but don't know how they do it. I've read stuff on the Internet, but that has just confused me more! 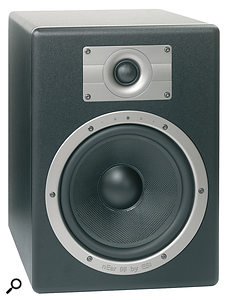 Crossovers use filtering to ensure that the monitor's drivers only receive the audio signals that they are designed to handle.

SOS Technical Editor Hugh Robjohns replies: A crossover is a set of filters designed to split the audio signal into two or more separate audio bands.

At its simplest, there will be two filters: a low‑pass and a high‑pass (also see the previous question, which explains filters in more detail). The idea is to present each loudspeaker drive unit with only the range of signal frequencies it can handle safely and effectively, while simultaneously helping the various loudspeaker drivers to integrate effectively, to create an overall sound stage.

The low‑pass filter only allows signals below a certain frequency (for example, below 2kHz) through to drive the mid‑range driver/woofer of a two‑way speaker system. The high‑pass filter only lets high‑frequency signals (for example, above 2kHz) through to feed the tweeter. More complex systems might add one or more band‑pass filters, extracting a range of mid‑frequency signals to feed one or more mid‑range driver(s).

Some crossover designs are 'passive' and are generally intended to handle the powerful full‑range output signal from a power amplifier. The crossover filter outputs then feed the corresponding speaker drive units directly. This kind of arrangement is still very common in passive domestic hi‑fi speakers.

Increasingly, though, many crossover designs are active, which means that they are designed to work on line‑level signals and are used to feed multiple power amplifiers instead of working on the amplified signal itself. In this situation, the active crossover outputs feed band‑limited signals to separate power amplifiers, and the outputs of the amplifiers are connected directly to their respective drive units. This kind of arrangement is commonly used in active studio monitors and most big PA speaker systems these days.

The advantage of active crossovers is that they are more versatile, easier to adjust, potentially more accurate, and often cheaper to build than passive designs — especially for three‑way and four‑way systems.

The shape of the filter cutoffs is important in matching the characteristics and dispersions of the drive units properly, and can vary from first order (6dB/octave) slopes up to fourth order (24dB/octave) or higher. Some crossovers also incorporate delay, to provide time‑alignment of the drivers, and sometimes also phase correction. Most also incorporate protective limiting circuitry.