Will Gigasampler Make A Comeback?

The 'Giga' sampling platform may be coming back from the dead, with the news that developer Gary Garritan has acquired it from Tascam. PC Notes reports. 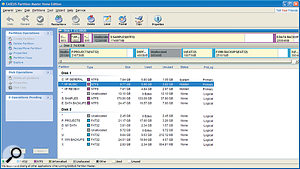 There was a lot of doom and gloom following TEAC's announcement last year that they would cease further development of Gigastudio and related products, because so many musicians and third‑party developers had invested so much money and effort in the Giga format.

In a surprise move on 1st April, which was assumed by many people to be an April Fool stunt, Gary Garritan announced that he had purchased the Giga Technology assets from Tascam, along with the rights to the Giga trademarks. However, once Tascam confirmed that after "reviewing over 20 companies” they considered Gary the best candidate to carry on development of the Giga platform, the news began to be taken rather more seriously.

Those with long memories will already know why Gary is such an ideal candidate to resurrect the Giga platform. He became involved very early on with Gigasampler and then Gigastudio library development; his excellent Gigaharp was released way back in 1999 and became part of the original Nemesys library, while his Orchestral Strings 'super library' incorporated many unique features, including the MIDI performance tools that became a model for iMIDI's advanced Legato, Random, Alternation and Round‑robin modes.

Gary's acquisition won't produce immediate results. There are reputedly two million lines of Giga code, including legacy stuff that needs updating, while the original development team are now working for other companies, so it's hard to say at this stage what Giga‑related products will appear in the future. Depending on what the new team find, there's still a possibility that some of the Giga products (such as the excellent Gigapulse convolution reverb plug‑in) will be revived. However, it seems more likely that they will be merged with other Garritan products.

Gary hopes that anyone who owns Giga‑format sample libraries will be able to use them in his future products, and he will be talking with other library developers to "explore various options”. Many have already converted their libraries to other formats, such as NI's Kontakt, but no conversion process is 100 percent perfect, and Giga had unique features. Overall, this news sounds very encouraging for those musicians who have already invested heavily in the Giga format.

Some people insist that the typical 500GB hard drive found in today's PCs should be left as one huge partition containing Windows, its applications and all your data. However, it's safer, as well as more convenient, to house Windows and applications on one partition, and store personal Data on a separate one, to make it easier to back up, immune to any Windows problems, and easy to move to another PC in the future. So most musicians will, at some time, need to create, delete, or format partitions on their hard drives, as well as resizing or moving existing ones.

Over the years I've recommended Powerquest's Partition Magic utility for this purpose, and relied on its easy‑to‑use graphic interface myself since 1999. Unfortunately, it doesn't seem to have been updated since Symantec took over from the original developers and brought it into its Norton product range in 2002, which means that it doesn't run under Windows Vista, or even recognise the contents of Vista partitions when running under Windows XP.

Enter Partition Master from EASEUS (www.partition‑tool.com), which, to me, looks very similar and functions almost identically to Partition Magic. The Home Edition runs on Windows 2000 SP4, XP Home, Professional, and Vista 32‑bit and is free, while the Pro version adds support for XP Pro x64 and Vista 64‑bit, can be run from a bootable CD/DVD, and costs just $32. There's even a $149 Server Edition that also supports Windows 2003/2008 Server (32‑bit and 64‑bit), and Windows 2000 Server/Advanced Server.

All three support IDE, SATA, SCSI, USB removable and Firewire hard disks from 2GB to 1.5TB, as well as hardware RAID. The Home Edition will be perfectly adequate for the majority of musicians running Windows XP 32‑bit and Vista 32‑bit, and is frankly amazing for a freeware application. After 10 years, I've finally abandoned Partition Magic!

Windows 7 Out In Time For Christmas? As I write this, Microsoft have just released the Release Candidate of Windows 7 (if no bugs are found in this version it becomes the final product). It's four months since the Windows 7 Beta version was released, and feedback has almost universally been positive, even among inquisitive musicians without proper Windows 7 drivers for their audio interfaces. Although there's still no official release date, a senior Microsoft employee has hinted that it could be on the shelves in time for Christmas. www.microsoft.com

Which Plug‑in Sounds Better? Internet forum battles still rage on, trying to establish which plug‑in offers the best‑sounding EQ, compression and so on, but it's so easy to fool yourself that the one that looks better sounds better. If you want to bypass the visual aspect, why not try Christian Budde's ABX Test for VST plug‑ins? It's a free download (from the Programs page at www.savioursofsoul.de/Christian) that lets you load and compare two plug‑ins side by side, while listening to their effects on your choice of audio file. You just set up similar settings for each plug‑in and then run the ABX blind test: you may find you can hear no reliable difference between the two, or that, while they sound different, neither is necessarily better than the other.