Q. Should I go for a Clavia Nord or a V-Piano?

I'm undecided about whether to choose a Roland V-Piano or a Clavia Nord, because Roland use physical modelling technology in their V-Piano that breaks the limitations of sample-based digital pianos like the latest Nord. Can you advise? 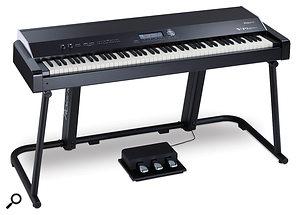 A large instrument such as the Roland V-Piano wouldn't be the easiest option for gigging, but in a permanent installation its size and weight would be much less of an issue.

SOS contributor Gordon Reid replies: Piano sounds and keyboard responses are very personal. Some people like Steinways, some (such as me) like Bösendorfers. Likewise, in the digital world, some people like the sound and response of the Nords, whereas some prefer the Roland, and some wouldn't wish to use either.

For what it's worth, I must admit that I'm a fan of the Extra Large Bösendorfer samples in the Clavia piano library. In contrast, I found the V-Piano to be considerably less satisfying 'out of the box', although it offers extraordinarily detailed editing potential and sounded considerably more engaging after I had spent a few hours making it imitate the less-than-perfect tuning and response of my Broadwood.

Which would I use? That's simple to answer. I'm a gigging musician, and the V-Piano is a large and heavy beast. Once in its flightcase, it's at least a two-man (preferable four-man) lift, whereas I can do pirouettes with a Nord Stage 2 HA88 under one arm. Since I like the sound and the feel of the Nord, the decision would be easy. Of course, size and weight wouldn't be an issue if I were considering a permanent installation, and the choice would then become much more difficult.

Regarding the technologies involved, I wouldn't worry about the use of samples, physical modelling, or anything that lies between. The sound and response are what matters, not the manner in which the electrons are inconvenienced.

Does this answer your question? Probably not. I'm afraid that there's no substitute for playing both instruments and seeing which you prefer. But don't try the acoustic piano patches in the Korg M3 or Kronos X, or even those in the latest Kurzweil PC3K8 — that would really complicate matters!