Q. Is there a difference between clipping and limiting?

What, if any, difference is there between clipping and limiting? Is a soft clipper just a limiter with very fast attack and release times? Where would you typically choose one over the other? 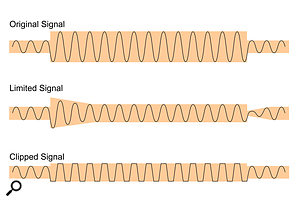 Although clipping and limiting are similar processes, they are not the same thing. As can be seen from the picture, clipping abruptly stops the signal from going over a maximum voltage limit, causing distortion. Limiting is a far more controlled process in which the signal is attenuated specifically to avoid clipping.

SOS Technical Editor Hugh Robjohns: On a purely technical level, clipping occurs when gain structure has gone horribly wrong, and limiting is the controlled application of gain reduction to avoid clipping! Both are non-linear processes, albeit in different ways, and both introduce distortion products. Soft clipping is still clipping, but with a slightly less aggressive onset of clipping: essentially a combination of limiting prior to clipping.

Clipping occurs when the audio signal amplitude exceeds the maximum voltage (or quantising) capability of the system. As a result, the output signal stops abruptly at the voltage (or quantising) limit, and so the tops and bottoms of the audio wave form are, in effect, 'sawn off'. This is something that inevitably produces strong harmonic distortion. The system is entirely linear up to the clipping level, and then horribly non-linear, so signals slightly lower than the clipping level are passed unaffected, while those at, or higher than, the clipping level are mangled, resulting in the addition of complex additional harmonics that were not present in the original.

In analogue systems, if the clipping is very brief, we don't normally perceive the resulting distortion at all. However, in digital systems, we can often recognise it because digital clipping produces unnatural anharmonic distortion through aliasing. This is especially obvious for signals with a well-defined harmonic structure, such as pianos, voices, and so on. Noise-like sources, such as cymbals and snare drums, when aliased, produce more noise-like distortions, so although the timbre might change slightly it won't usually be recognised as distortion.

Limiting is an altogether much more controlled business, where a loud signal is briefly attenuated, specifically to avoid clipping. The short-term dynamic changes involved do introduce a form of distortion, but it is a far more benign form and, again, it is rarely recognised as such. The system is linear up to the limiting level, above which the waveform is reduced in amplitude but more or less retains its original shape, and thus remains harmonically intact. The distortion that results is usually negligible.

As a technical engineer, I'd suggest that clipping is a fault condition that should always be avoided, and that peak control should always be achieved with a fast-acting limiter. However, as a mixing engineer, I know that the harmonic distortion produced through analogue clipping can sometimes be an artistically and musically useful tool in the right context. It produces a very different kind of sound, and at the end of the day, the intended sound is what would determine whether clipping, soft clipping, or limiting is the appropriate form of processing. Personally, I shun digital clipping at all times because I just don't like the resulting sound... but I know of people that do like it.