Q. Why does the instrument input of my audio interface always clip?

I've been searching to find a sensible answer to this question to no avail. Using my Focusrite USB interface, even with a minimum input gain setting, recording any traditional, passive guitar plugged straight into the high-Z input results in clipping overloads. I've found this can be avoided by using the pad switch at the same time as the high-Z switch, or using an external DI box with a pad engaged, or not using the high-Z switch on the interface (ie. using a standard line-level input).

The volume differences make it quite hard to compare these solutions by ear, so is there a technically correct way of dealing with this? The popular Internet forum advice to 'lower the pickups relative to the strings' and 'turn the guitar volume pots down' appear pretty ridiculous to me... 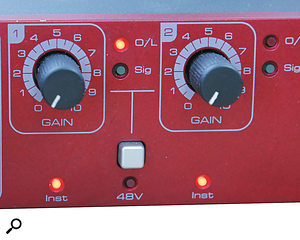 Some early Scarlett interfaces had a problem with low headroom, causing the instrument input to clip — this has been improved considerably on later versions.SOS Technical Editor Hugh Robjohns replies: This is a recognised design problem on some of the smaller Scarlett interfaces, I'm afraid. (The later Scarlett instrument-input circuitry was designed with a higher headroom margin.) If the clipping goes away by switching in the pad, then your work is done: the instrument input mode provides the right impedance for the guitar, and the pad provides the right level.

Unfortunately, this solution won't work with all interfaces, as the pad isn't always functional on the instrument inputs. The buffer on the instrument input is normally a unity-gain design and placed before the pad in the signal path, so the only thing to watch out for is overload distortion in the input buffer itself. If it sounds clean then there's no downside to this solution.

Alternatively, you could use an external active DI box and route its output into the interface via a mic input channel. The DI box will provide the requisite high input impedance to satisfy the guitar, while simultaneously reducing the signal to mic level — and the mic preamp should then have enough gain range to set an appropriate recording level.

Connecting the guitar to the interface via a line input will not present the appropriate high-impedance load, so although the levels might be better, the tonality and playability will suffer badly.

Regarding the 'Internet solutions', those suggestions will reduce the guitar's output level — so they're logical offerings and will work to some degree. However, they will both inherently alter the tone and playability of the guitar, and so are inappropriate and unhelpful suggestions from that perspective.

Back in SOS May 2014, we ran an article that explained what levels you should be listening at when recording and mixing in different-sized rooms (https://sosm.ag/referencemonitoring), and that prompted Rinus Aarts of The Netherlands to email in and offer a useful tip:

"I loved your article about monitoring levels, and applied it to my project studio! However, for my work I have to switch a lot between DAW and system audio, for instance when listening to iTunes, Spotify or files in the finder. The problem — and I know you mentioned this in the article — is that if I have the monitor level at the reference position for the DAW, it's way too loud for this commercial stuff, and it's not convenient to have to adjust the level every time.

"So here's a tip for other project-studio owners that have an interface with multiple outputs and routing capabilities. What I did is have the system audio go to outputs 3‑4, and set the level for those at ‑14dBFS. The software mixer that is part of the Fireface interface I use allows me to route these outputs to 1‑2, the same as my DAW. In this way I can keep my monitor level at the same reference position when comparing mixes with streamed material and commercial CDs.”

SOS Technical Editor Hugh Robjohns responded: "I'm glad you found the article useful. The inherent problem with the high average level of low‑headroom commercial material is a frustration, but your workaround is a very neat and elegant solution. I'm sure many of our readers will find that a handy and extremely practical tip.”