If you're serious about recording and mixing you need to set a consistent reference level to which you can always return. Our seven‑step guide explains how to do it.

Setting up and maintaining optimal signal levels through an audio chain, from the microphone preamp right through to the DAW, brings many important practical and sonic benefits, as Matt Houghton explored in his article about gain staging in your DAW (SOS September 2013, http://sosm.ag/sep13-gainstagingDAW). There's also a growing movement to set levels according to the material's overall loudness, rather than the signal peaks, as I described in my feature on the BS.1770 loudness standards recently (SOS February 2014, http://sosm.ag/feb14-endofloudness). In both cases, it makes a lot of sense to extend these gain staging and loudness concepts all the way to the monitors, 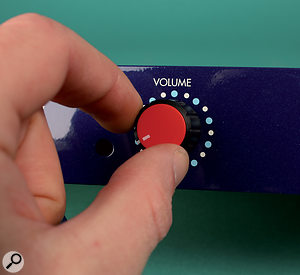 the listening environment, and ultimately our own ears.

In essence, what I'm talking about is establishing a reference listening level in the control room, to use as a reliable base from which to make aural decisions. The good news is that this is very simple to achieve, and doesn't require any major investment in new equipment, although it's certainly easier and more intuitive if you have a well‑designed monitor controller and a simple SPL meter.

Gain staging is all about setting a reference signal level — the operating level — through both hardware and software signal paths, which provides a sensible headroom margin above while simultaneously ensuring signals remain well clear of the system noise floor below.

This headroom margin (typically 20dB in professional systems) helps to avoid accidental clipping and unplanned distortions — and it is frequently overlooked! In fact, one of the most common complaints about digital working, the 'harsh sound of digital', is often caused by working with a negligible headroom margin in the DAW. What that means is that the analogue front end and the analogue monitoring chain electronics are all operating with much higher average signal levels than their designers intended, and are often on the verge of clipping. So it's no wonder they can sound a bit strained!

From a practical recording technique perspective, working with sensible headroom margins makes tracking far less fraught (because the risk of clipping is removed), so you can concentrate on performance rather than level watching. It also makes mixing much easier for similar reasons, but also because many plug‑ins, especially vintage emulations, simply sound better when used with typical analogue levels and headroom margins.

The nominal operating level we establish with our headroom margin can usefully be translated through to a reference listening level from the control room's speakers too. Our ears quickly become used to a 'standard' volume, and we can then judge levels, loudness and dynamics by ear — and surprisingly accurately too. In that way, mixes end up being more consistent, and working to the new loudness standards becomes easier because we know intuitively when something is 'too loud' or 'too quiet'. 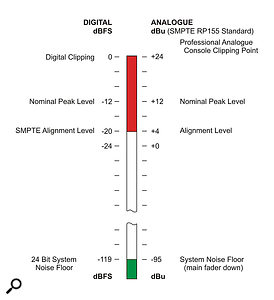 A comparison of typical analogue signal levels and their ideal digital equivalents to maintain similar headroom margins. Alignment level — the standard operating level — is typically +4dBu or 0VU in an analogue system, which equates to ‑20dBFS in a digital system.This concept was embraced in the cinema industry back in the late 1970s, with a rigorously enforced standard reference acoustic level in all dubbing theatres, and is mirrored in the presentation cinemas. In the broadcast world, TV sound balancers now working in BS.1770‑compliant facilities are also finding that by adopting a sensible reference monitoring level at the start of the day, their mixes fall in line with the R‑128 requirements almost automatically, again because their ears naturally tell them when things are too loud or too quiet.

Another aspect of setting a reference speaker level is to work in an optimal part of the Fletcher‑Munson equal‑loudness curves of the human ear. The idea is to provide a consistently uniform frequency response and minimise problems with too much or too little perceived bass. However, while there is some validity to this, we must also be careful because of the psychoacoustic effects of different room sizes, of which more later!

If you're not used to it, working with calibrated monitoring levels will involve a few small changes in working practices. The most obvious change is to always starting a mix session with the monitoring at a 'calibrated' reference point. For some it may also involve finding and using more appropriate meters, or using existing meters in a slightly different way, too.

So, down to the nitty‑gritty! How do you establish a reference monitoring level in your control room? The process is fairly straightforward and involves only seven steps...

Step 1: The first stage in establishing a calibrated monitoring level is to decide on a preferred digital 'operating level'. This can be anything you like, but I prefer to stick with the professional convention that calls for a 20dB headroom margin, so the digital operating level becomes ‑20dBFS. To make the chosen operating level obvious we need to find a suitably calibrated meter scale or some other way of making the reference point. Analogue meters had suitable reference points built in — like the 0VU mark — but standard digital sample meters in DAWs usually have no such provision.

However, some systems allow the meter to be customised with different coloured regions and, for example, in some of my DAWs I set the metering up with green below ‑20dBFS, yellow from ‑20 to ‑10 dBFS, and red up from there up to 0dBFS. If you are using an analogue‑style meter plug‑in you will simply need to set the reference level (0VU, PPM4, etc.) in the configuration panel to the preferred digital reference level (‑20dBFS or whatever). Or you could embrace Bob Katz's K‑20 meter — plenty of manufacturers offer K‑System meter plug‑ins.

If you always work with low dynamic‑range mixes (ie. the 'bang it against the end‑stops to make it louder than everyone else's' school of mixing!) then you may wish to employ a smaller headroom margin with a correspondingly raised operating level. However, I certainly wouldn't advise setting an operating level higher than ‑12dBFS in any circumstances, and a digital operating level of ‑14dBFS might be more practical. (K‑System meters support both of these options, too.)

Step 2: The standard test signal for acoustic alignment is pink noise, which sounds like a waterfall, with a smooth top‑end. Ideally, it should be a band‑limited pink noise signal in mono, and at an RMS level that precisely matches the chosen digital operating level. (RMS is short for 'root mean square', which is a kind of averaging process.) The band‑limiting means that the frequency response has been curtailed deliberately, and in this case it is usually restricted to 500Hz to 2kHz. The idea is to minimise the likelihood of any low-frequency standing waves or strong local mid and HF reflections within the listening room causing significant measurement errors. (You can use full-range 20Hz to 20kHz pink noise if you like, but the measured acoustic level is likely to be less accurate, unless you're in a well‑treated room.)

Mono, band‑limited, pink noise files with a guaranteed RMS level of ‑20dBFS are freely available on the Internet or can be generated in some DAWs. Bear in mind, though, that very few meters indicate true RMS levels, so don't be surprised if your guaranteed ‑20dBFS RMS pink noise file appears to replay at a slightly different level! (For this reason, it is often worth first checking the electrical system alignment with a ‑20dBFS sine wave test signal, which will register accurately on all meters). If you want to work at a different operating level you'll need to adjust the pink noise signal accordingly.