We round up the pick of Reason's Rack Extension dynamics processors.

In these days of Rack Extensions Reason users are faced with an embarrassment of riches when it comes to compressors and other dynamics processors. This month we're going to look at what's available, and how best to use some of these powerful and sophisticated tools.

In last month's column I looked at Reason's bundled compressors; in particular the mixer's channel dynamics section and Master Compressor, and the rack devices Pulveriser, MClass Compressor and MClass Maximizer. You can achieve a heck of a lot with these devices, from transparent level control to obvious, coloured, pumping effects.

Currently the only LA2A emulation available for Reason, RE2A sounds great on just about anything! Turn to third-party Rack Extensions, though, and the possibilities open up massively. You'll find emulations of hardware compressors, more obviously coloured treatments, specialised abilities, and sometimes all three together!

There's a good reason why the great hardware compressors of engineering history are so revered: they just seem to make everything sound better, and are often very easy to use. Try them on vocals, drums and guitars, and you might well find yourself thinking 'Ah! So that's how you get that sound...' And, of course, we're in the fortunate position that RE versions cost rather less than buying an original hardware unit.

Starting off with a real classic, the LA2A dates back to the 1960s, manufactured by Teletronix and UREI, and later reissued by Universal Audio. As an 'optical' design, using a light‑emitter and photocell combo to control compression amounts, it's a notably smooth compressor that's ideal for vocals, but can be used on anything, really, to increase a sense of weight and presence.

Perhaps surprisingly there's currently just one LA2A emulation available in Reason: Cakewalk's RE2A (€65$79). But it's a good one, and ridiculously easy to use: the Peak Reduction knob controls the amount of compression, and the Gain knob restores any lost level. You can tweak further, with a Limit/Compress switch toggling between two preset compression ratios, and the R37 screw changing the amount of compression applied to high-frequency content. But you don't have to work hard to get good results, and you may never feel the need to touch these.

Also a 1960s design, this time transistor‑based, the 1176 was first produced by UREI. It's another all‑rounder, seemingly capable of making anything sound subjectively better, but with a different, leaner and more precise character than the LA2A. With more front panel controls it's arguably a little more flexible too.

There are at present two Rack Extension versions of the 1176: FXpansion's DCAM ChanComp (€25$29) and Softube's FET Compressor (€119$149). They look radically different, but in fact offer essentially the same controls. The giveaway feature is the compression ratio selection based around preset values of 4:1, 8:1, 12:1 and 20:1, as well as a final option marked 'ALL' on Softube's RE, and 'Nuke!' on FXpansion's. This emulates the original unit's behaviour 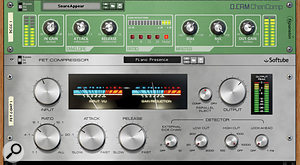 FXpansion's and Softube's take on the 1176 — they sound a bit different too... when all of its ratio buttons were pushed in simultaneously, resulting in a really aggressive, in‑your‑face compression. Softube have opted to put ratio selection on a knob, though, and make it continuous, whereas FXpansion have stuck with the button design.

The two REs sound remarkably different from each other in their ALL/Nuke! modes, given they're supposed to be emulating the same original unit, but both have a helpful on‑board facility for mixing in some dry signal with the compressed sound: a MIX control on ChanComp, and a Parallel Inject knob on FET Compressor.

Another heavyweight (in all senses of the word) compressor emulation is McDSP's C670RE (€39$49), based on the Fairchild 670. The design of this 1950s whopper was all about avoiding audible pumping and surging of level, and so compared to an LA2A or 1176 it's a much more silky, subtle proposition. But that makes it an ideal candidate for insertion in Reason's Master Section, to process a whole mix, for mastering, and for processing bus channels too. In this role it imparts an EQ‑like high-frequency lift and sheen — very classy. Turning Threshold down increases the amount of compression, and you restore level with the Out knob. Setting the Time Constant knob towards zero makes the C670 operate more crisply, for drums and other transient‑rich sources.

Quite similar in character is another McDSP RE, Moo Tube (€39$49), based on the Manley Variable Mu Limiter. It's another one that's best for wide‑band whole‑mix and bus-channel usage, rather than for individual channels, and if anything it feels even more glossy and sparkly than the Fairchild.

FXpansion's DCAM BusComp (€25$29) can be subtle too, but at higher ratios and lower thresholds 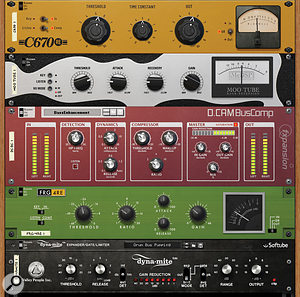 There's now every style of compressor available for Reason, from delicate mastering tools to more heavy‑handed 'character' treatments. will pump and suck with the best of them. The Detection knob also has a crucial role to play; it determines to what extent low frequencies trigger compression, but in practice almost behaves like a low‑end EQ, letting you tighten or fatten the bass. The design seems to be based on an SSL bus compressor, quite like Reason's built-in Master Compressor.

And rounding off this little survey of modelled gear come two last compressors, both unashamedly vigorous in character. McDSP's FRG4RE (€39$49) has a distinctive left‑swinging meter that's reminiscent of Thermionic Culture hardware, and it can sound extremely energetic, great for some styles of electric bass and sizzling drum overheads. Then there's the slightly oddball Valley People Dynamite (€119$149) by Softube, a software model of an existing 500‑series rack module. It's a comparatively hard‑sounding processor, but is capable of jaw‑dropping, frankly terrifying levels of compression, as well as gating and expansion. It's worth a try to see what you think, because there isn't much else like it!

Copying pre‑existing compressors isn't the only way for RE developers to go, of course. Red Rock Sound offer C1L1 (€39$49), a very distinctive design with various mono, stereo and M/S operating modes as well as a mid-EQ and separate limiter stage. It's a reworking of the DAW plug‑in Molot (vladgsound.wordpress.com/plugins/molot). Red Rock's other two RE compressors, C1 Alpha and C1 Sigma, are cut‑price spin‑offs, varying only in their attack characteristics, which is switchable on the full product. The difference is pretty subtle, but Sigma promises a smoother, perhaps more optical‑like behaviour than Alpha.

For something quite unique, though, try Selig's Leveler (€55$69). Originally called 'The Curve' this is a rare beast, an 'upward' compressor that preserves the peak 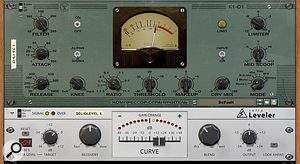 Two novel takes on the compressor: Red Rock Sound's military‑vibe C1L1 and the unique Selig Leveler. level of your signal without raising the noise floor. It essentially only increases the level of part of the dynamic range — anything up to 48dB below the peak. Using it is easy, but unconventional. You first have to run your track's loudest signal through it to discover its Peak Level, indicated by a numeric display on the front panel. Next you set the Target knob to that same value. Then it's simply a case of adjusting the Curve fader to increase (or indeed decrease) average level. The wet/dry Blend knob dilutes the effect if necessary, and along with a Look Ahead mode can help achieve really smooth results. It can work wonders on vocals, boosting and controlling levels without unduly accentuating sibilance or breath sounds.

The tide finally seems to be turning against super‑hot mixes that squash all the life and dynamics out of the music, helped along by some recently introduced international standards that Hugh Robjohns discussed in the February issue of SOS.

But to mix like this, with sensible, repeatable headroom amounts, requires a more careful approach to metering. Essentially you need a new 'zero' to aim for that isn't 0dB full scale. And while various Rack Extensions provide specialised metering (like Flower Audio's Loudness Meter, or Redrock's PPM and VU meters), you really need to be using these as part of a well‑understood, calibrated and referenced workflow to get the best out of them.

One simple way of working is to open up Reason's Big Meter by clicking its button in the Hardware Interface rack device. By repeatedly clicking the Mode button you can switch to a VU (or joint VU/Peak) scale, and then use the VU Offset knob to dial in a zero that is up to 20dB below digital full scale. Aim for that when you're mixing — the

Reason's Big Meter and main mixer, as well as specialist REs like Measure, can allow for digital meter scales that include some headroom. same scale can appear next to the mixer's master fader — and you know you can let short‑lived louder peaks and musical sections go into the headroom above without fear of digital clipping.

To get the same benefits but referenced to proper industry standards, try Redrock Sound's Rack Extension Measure (€19$25). Hook it up between the Master Section's Master Out sockets and your audio interface's output pair, and you can then mix to any of the three level standards of Bob Katz's K‑System, or switch to a fully compliant R128 mode with 23dB headroom. It doubles as a phase meter too — a really hand RE to have around.