Q. Should I use 48V phantom power or a battery for my DI box? 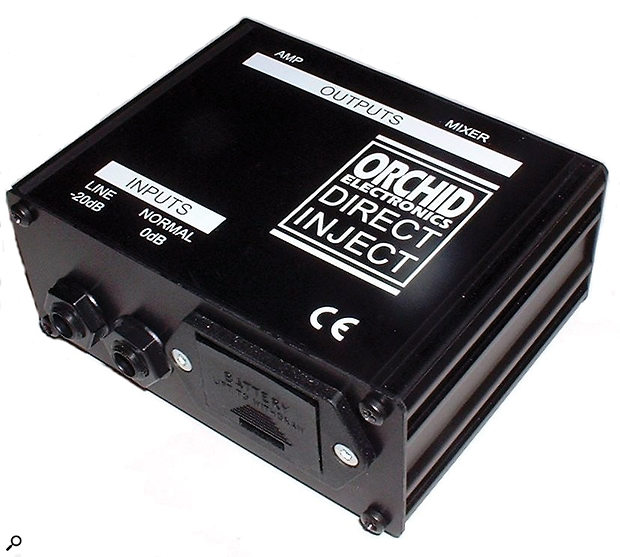 The Orchid Classic DI can be powered by batteries but using 48V phantom power will reduce the chances of clipping.

What’s the benefit of using phantom power instead of a 9V battery to power an active DI box (specifically the Orchid Classic DI)? I’d like to split the signal from my guitar using the DI box, with the ‘dry’ output from the DI box’s XLR out going to a mic input on my Behringer UMC204HD interface, and the ‘amp output’ going to an effects pedal and back into the adjacent line input of the same interface as the ‘wet’ signal. That way, I can record the clean guitar and the effects to separate channels in my DAW.

My concern is that when phantom power is enabled on the UMC it is applied to both channels, and the manual does not state whether the TS line input connection dishes out the phantom-power voltage (the interface uses XLR/TRS ‘combi’ jacks). So, to play it safe, I thought of powering the DI box with an internal 9V battery. Is there a downside to working this way?

SOS Technical Editor Hugh Robjohns replies: In the broadest terms, running an active DI box on battery power can potentially result in a reduced headroom margin — the DI box circuitry could be more prone to overload distortion on loud transient peaks — but because every DI box is designed with different circuitry they all behave differently, too, so it’s hard to give a precise answer. In general, though, the performance should be adequate when working on (fresh) battery power; the manufacturer shouldn’t really have provided the option otherwise.

Running on phantom power is usually a better option, because it avoids the cost of replacement batteries, it won’t matter if you forget to switch it off (or on), and as phantom power is nominally 48V, the circuitry has more to work with than a 9V battery, which can potentially translate into more headroom and lower noise.

It might be sensible to clarify exactly what I mean by ‘headroom’, and for that we need an understanding of the ‘dynamic range’ of an audio device, which is essentially the ‘space’ between the noise floor at the bottom, and the overload or clipping level at the top. The level of the noise floor is essentially determined by physics, but the clipping level is directly related to the circuitry’s power-supply voltage.

Ideally, we try to keep the wanted signal well above the noise floor (to minimise the audibility of unwanted hiss), but safely clear of the clipping level so that it doesn’t overload. To assist with this the manufacturer defines a ‘nominal operating level’ (or reference level) — and on a sound desk that would typically be represented by the 0VU mark on a meters, and is usually a signal level of +4dBu. Obviously, the actual sound level will vary above and below that nominal operating level, but that’s the point we generally aim for when we’re adjusting the input level controls.

In equipment like a professional mixing console, the noise floor will be around -95dBu and the clipping level about +24dBu (ballpark figures). The ‘headroom margin’ is the notional region between the nominal operating level (+4dBu) and the clipping point (+24dBu), which would be 20dB in this case, and that 20dB headroom margin is used to accommodate large transient peaks without overload distortion.

Now, the peak-to-peak voltage of a +24dBu audio signal is 34.7V, so most professional audio equipment runs on ±18V power rails, to give 36V in total (most op-amps clip slightly below the supply voltage). As you probably already realise, if the electronics were powered from a 9V battery instead, the largest audio signal that could be handled would be a lot lower. In fact a signal level of +12dBu has a peak-to-peak voltage of 8.7V, and in this case we’d then only have 8dB of headroom above the +4dBu operating level, and the circuitry would obviously overload much more easily. The lower the power supply voltage, the smaller the signal voltage that can be accommodated, and the less the headroom margin will be (for the same nominal operating level).

Fortunately, a DI box is intended to work with the much lower signal levels from, for example, a guitar, rather than professional line-level signals. Typical instrument signals have a nominal operating level of around -20dBu. So if we wanted a 20dB headroom margin we’d need to make sure the electronics didn’t clip below 0dBu — and that’s easily accommodated with a 9V battery as we’ve already seen. In fact, most active DI boxes clip somewhere between +2 and +12 dBu, so there’s usually plenty of headroom in normal use, even when powered from a 9V battery, although the clipping level will reduce as the battery drains and its voltage sags.

As evidence, I tested my Orchid Muting DI, which employs similar circuitry to the Classic model, and found that this started clipping with a +13dBu input when running on phantom power. When powered from a (slightly used) PP3 battery, clipping started with an input of +2dBu. The reason is that phantom power provides the internal circuitry with a power rail of around 30V, but that falls to about 8.5V when running on battery power. So, in practice, the headroom margin is about 10dB lower on battery power, which means that there may be some transient distortion on very loud peaks that wouldn’t occur when using phantom power. Of course, if that becomes a problem, an easy workaround is to turn down the output level of your pedal or guitar!

Returning to your other concern, phantom power shouldn’t appear on the interface’s line input TS/TRS socket connections; it should only be on the XLRs, even in ‘combi’ jack sockets. However, I’ve come across a number of products over the years that break that ‘rule’ and I can’t guarantee the UMC is phantom-safe on its line inputs (because I haven’t tested it personally). I’d be surprised if there were a problem, but the sensible thing would be to check with a multi-meter, measuring the DC voltage between the tip and sleeve terminals of a TS plug inserted into the line input when phantom power is enabled. Hopefully, there won’t be any voltage present at all (if phantom is present you’ll get a reading of 48V or so).