Q. Should I use balanced or unbalanced connections with my live console? Skip to main content

Q. Should I use balanced or unbalanced connections with my live console?

As I use several sound sources at club gigs and festivals, I usually prefer, to sub-mix myself. I have been sending the (impedance) balanced main XLR outputs of my Allen & Heath ZED 12FX mixing console to the balanced (TRS jack) stereo in jack sockets of my colleague's Allen & Heath PA12 mixing console and it works just fine. However, in my quest for ultimate sound quality and minimal signal path, I'm thinking of changing to using the unbalanced RCA-phono alt out of my desk (which is pre-master fader, but it has its own rotary pot to adjust the output level) into the unbalanced RCA-phono stereo in of my colleague's desk. Do I really need to worry about having a fully balanced connection when the output signal is at around +4dBu? 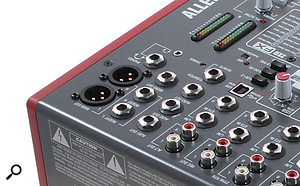 Will using the unbalanced output from an on-stage mixer result in a cleaner feed to the FOH console? Probably not...SOS Technical Editor Hugh Robjohns replies: Before I answer your question, let me quickly make a minor, but important, technical correction: I believe all of the outputs on the A&H desks are designed to work with a nominal level of 0dBu, not +4dBu, and that includes the RCA-phono alt outputs, which would more normally be expected to deliver a nominal -10dBV (about -8dBu). A&H desks run at 0dBu rather than +4dBu because the power rails only allow +21dBu at clipping, and so this approach gives a 21dB headroom margin, rather than just 17dB.

I would also question your desire for 'ultimate quality' because I don't think that should be the primary goal here ­— leave that to the recording studio! What you need on stage is adequate quality and total reliability, and that means balanced connections.

In any case, the active signal path is essentially identical whether you have an impedance-balanced output or an unbalanced output — it's still only one active device either way. Furthermore, the only practical difference in the input stage is that the receiving op amp is connected differentially instead of single-sided; it's still the same device in the signal path, but without the interference-rejecting and ground-loop freedom benefits of the balanced version!

Added to this, A&H consoles are very well designed and signal quality really isn't an issue to be worried about. I don't think you would notice any sound-quality benefits from using an unbalanced signal path, but you would certainly notice ground-loop and interference problems from not using balanced interfaces!