Q. Is there any advantage to using two subwoofers? Skip to main content

Q. Is there any advantage to using two subwoofers? 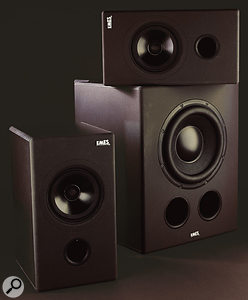 Because the EMES Black TV Active monitors are full-range speakers, when they're used with the Amber subwoofer, the crossover can be comfortably set at 80Hz rather than 120Hz.

I have heard of having a subwoofer in your studio in combination with your monitors to reach the extra-low frequencies. However in the Bob Katz book [Mastering Audio reviewed SOS October 2003], there is a picture of his studio where he has two subwoofers, one below the right monitor and one below the left monitor. Sub frequencies in stereo? This was a first for me. I never thought of the low frequencies being in stereo. Usually you think of keyboards, voices, and guitars in stereo, but not bass frequencies. What are your thoughts on this?

Technical Editor Hugh Robjohns replies: This is a very complex subject and we'll need to separate the real issues from the urban myths if we're to get to the bottom of it.

There is quite a lot of evidence to suggest that we cannot perceive what direction low-frequency sound is coming from, and hence a single subwoofer would appear to make sense in the context of a sub-equipped stereo or surround system, where full-range speakers aren't practical (or affordable).

However, the upper frequency limit of the sub (and thus the lower limit of the satellites) has to be set very carefully. A lot of home theatre systems, for example, use ludicrously small satellites and thus require the sub to operate well into the range of directional frequencies.

There are two 'proper' standards for crossovers in the home cinema world (for sensible-sized speakers, not mini satellites) — one is 120Hz and the other is 80Hz. Personally, I favour the latter, as I think it is possible to locate 120Hz fundamentals.

However, the major fly in this particular ointment is that distortion in low-frequency speakers is inherently quite high, especially in the case of ported cabinet designs. Distortion produces harmonics, and those harmonics, although low level, are in the directional frequency range and hence the location of the sub becomes very obvious.

So, one way around this problem is to ensure that the crossover point between the satellites and subwoofer is as low as possible (80Hz for example), even though that means that reasonably-sized satellite speakers are needed (not usually a problem in music studios, but not common in the cheap home theatre systems), and that the subwoofer has to have extremely low distortion figures. 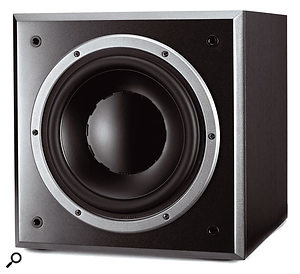 Subwoofers which employ a closed cabinet design, like the Dynaudio BM9S, can offer a more precise low-frequency response, but at the expense of efficiency.

Using two subwoofers is an alternative way of tackling the problem. By driving the room from two points instead of one, two different sets of room modes are excited, which can result in a smoother overall low-frequency balance. Also, any tendency for the harmonics produced by distortion to skew the image can be balanced out and thus effectively nulled, though I'm ignoring the unwanted masking effect that such harmonics would have. We could also go on to discuss the issues of actually trying to match the on-axis and off-axis energy responses of the satellites and subs, which makes the use of satellite and subwoofer systems seem even less attractive to me.

Of course, there are some systems that do work very well, and there are undeniable practical and fiscal advantages to 2.1 (or 2.2) setups in certain situations, but they all take a huge amount of careful setting up, both in calibrating and positioning the subwoofer(s). We've touched on these issues in these pages and elsewhere in Sound On Sound on a number of occasions — have a look at Mallory Nicholls' article on subwoofers from SOS July 2002 (www.soundonsound.com/sos/jul02/articles/subwoofers.asp) and the Studio SOS feature in SOS April 2003 (www.soundonsound.com/sos/apr03/articles/studiosos0403.asp). Ideally, I'd always prefer a full-range stereo system, but the constraints of space and budget mean that for most people this is rarely practical in a domestic situation.