Q. Is there a better balanced-to-unbalanced cabling solution? Skip to main content

Q. Is there a better balanced-to-unbalanced cabling solution?

The line inputs on my computer interface are all balanced on TRS sockets, but the outputs of my hardware synths are all unbalanced on mono TS sockets. I've been connecting them with ordinary unbalanced guitar leads up until now, but some of them suffer from what I think is ground-loop hum, and I wondered if there was a better way? I thought about using DI boxes, but I don't have enough mic-level inputs.

SOS Technical Editor Hugh Robjohns replies: DI boxes would certainly cure the ground-loop hum problem, because they generally employ a transformer to balance the signal, with a ground-lift switch to isolate the grounds between the synth and interface. However, it seems a bit silly taking a line-level signal from a synth and knocking it down to mic level, only to re-amplify it again inside the interface, and as you don't have enough mic inputs we can discount that option anyway! A better option would be to use line-level transformer isolation boxes. These use a transformer again to balance the signal and isolate the source and destination grounds but, like DI boxes, the good ones are quite expensive. 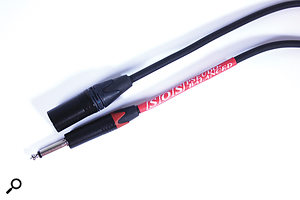 Unless you're handy with a soldering iron — and have a lot of patience! — SOS's custom-made pseudo-balanced cables could be the best solution for connecting unbalanced equipment to balanced inputs.

Thankfully, there is a much cheaper and more convenient alternative, which takes advantage of the fact that a balanced input is also a 'differential' input. A differential input looks for a signal applied between the 'hot' and 'cold' sides of the connection, and unlike an unbalanced connection, the cable screen (which is grounded) plays no part in transferring the wanted audio — it's only there to trap unwanted external interference. We can use this differential input idea to our advantage by wiring a cable in a slightly non-standard way, to trick the balanced input into accepting an unbalanced signal, while also avoiding a ground loop.

Technically, the balanced input loses its ability to reject electrostatic (RF) interference, because the impedances to ground from each input terminal are now different (unbalanced). However, with line-level signals connected with relatively short cables of under five metres or so, RF interference is unlikely to be a problem anyway, and in practice I've employed variations of this kind of 'bodge' interfacing for decades without any problems. Incidentally, this kind of 'bodge' interface is typically called a 'pseudo-balanced' connection.

The quickest, easiest and 'dirtiest' DIY approach would be to cut off the TS plugs from the interface end of your existing unbalanced cables, and solder on new TRS plugs for the balanced input. The signal core wire should be reconnected to the TRS tip terminal, and the screen to the ring terminal, leaving the TRS sleeve unconnected and isolated.

Although that solution will work, it has virtually no protection against RF interference, and a better solution can be obtained if you start with balanced cables and modify the unbalanced end instead. In this case, the hot signal wire is connected to the unbalanced tip, the cold signal wire to the unbalanced sleeve, and the balanced cable screen is left isolated and disconnected. In this way the cable screen will provide a useful degree of RF protection, although it isn't as good as it could be...

The optimum solution is to connect the screen at the unbalanced end too, because that maximises the RF screening. However, a direct connection will reinstate the ground loop, so that's not a good idea. Instead, the cable screen should be connected at the unbalanced end via a simple circuit that maintains a relatively high impedance to mains and audio frequencies to prevent the ground-loop hum, but a much lower impedance to RF to maintain effective RF screening. This simple circuit is nothing more than a 100Ω resistor in parallel with a 10nF capacitor, although these values are not particularly critical.

The practical problem with this approach lies in trying to squeeze a resistor and capacitor into the very limited amount of space inside a standard TS plug without everything shorting out. It's not impossible if you have decent soldering skills, small components and some patience, but for those who don't, help is at hand in the form of our very own custom-made SOS pseudo-balanced cables. These are available from the SOS shop to UK customers at £19.99 (or £16.99 to SOS subscribers). They come with either an XLR or a TRS connector at the balanced end. They are made to our own specifications and to very high standards by Pirahna Cables using Neutrik connectors and Pirahna Ultraflex cable. I've been using some recently to avoid the frustration of making up some new pseudo-balanced cables myself, and they work superbly well