Q. What do the different 'colours' of noise do? Skip to main content

Q. What do the different 'colours' of noise do?

I'm familiar with white noise, but I've also seen mention of pink, red and even blue noise in your pages. What are these other kinds of noise, how are they produced and what are they used for? 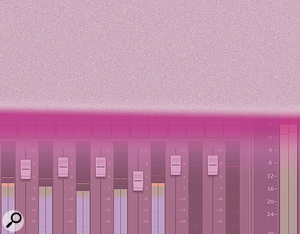 Technical Editor Hugh Robjohns replies: There are several 'colours' of noise, the most commonly encountered in audio circles being white and pink.

White noise is a signal with the property of having constant energy per Hz bandwidth (an amplitude-frequency distribution of 1) and so has a flat frequency response. It is mainly used for testing audio equipment.

Pink noise contains equal energy per octave (or per 1/3 octave). Of all the 'coloured' test tones, this one sounds most like naturally occurring noise (a waterfall, for instance) and the amplitude follows the function 1/f, which corresponds to the level falling by 3dB per octave, or 10dB per decade. Pink noise is mainly used for acoustic measurements.

Brown noise, whose name is actually derived from Brownian motion, is similar to pink noise except that the frequency function is 1/(f squared). This produces a 6dB-per-octave attenuation (20dB per decade).

There are several ways of creating broadband noise. The simplest is to use a special noisy diode or transistor and amplify the noise it produces naturally. However, a more modern practice is to use a microprocessor to generate random numbers which are then converted with a D-A coverter to produce the noise signal. The various colours of noise are produced either by simple analogue filtering, or by clever programming of the random number generator used to create the noise in the first place.