Q. What are the correct input impedances for Guitars and Mics? Skip to main content

Q. What are the correct input impedances for Guitars and Mics? 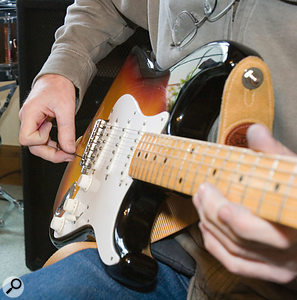 I bought a Boss guitar effects processor the other day, and noticed that, even without any effects, the guitar sounds a lot better through it than it does just straight through my mixer. I remembered reading something about electric guitars having a different input impedance to other kinds of equipment, and I'm wondering if this could be the cause. Also, could the sound from my mic be similarly improved by getting a stand-alone voice channel for it rather than just putting it through the mixer? Would the impedance match be much better?

Technical Editor Hugh Robjohns replies: An electric guitar ideally needs to work into an impedance of around 1MΩ or thereabouts. The line inputs of most sound consoles and mixers (I'm assuming that you had previously been plugging your guitar into a line input) generally have an impedance of about 10 to 50 kΩ — way too low to allow a guitar's pickups to work properly. The Boss pedal will have a much higher input impedance, and the guitar sounds a lot better because its pickups can work more effectively. Electric guitars always benefit from a decent 'DI' input, as you have now discovered for yourself.

Modern microphones require an input impedance of between 1.2 and 5 kΩ, and most sound consoles, preamps and channel strips standardise on either 1.2 or 2.4 kΩ. A few preamps now offer variable impedance options that span the full range, but these are relatively rare. In impedance terms, there is unlikely to be any benefit at all in connecting your mics to channel strips rather than the mixer mic inputs. However, a dedicated channel strip may well have better-quality mic preamp circuitry and better EQ than a budget mixer, which may enable a better overall sound.