Q. What does a compressor's sidechain do? 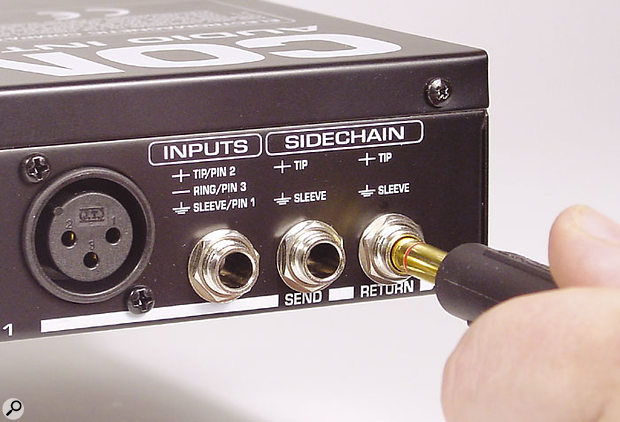 Having access to a compressor's side-chain allows more precise control over how the compressor behaves and when it operates.

Technical Editor Hugh Robjohns replies: All dynamics processors — compressors, gates and de-essers — use a gain-controlling device to alter the instantaneous level, and thus the dynamics of the input signal. The gain controller could be a solid-state VCA, a valve, or an opto-resistor, depending on the design of the unit, but whatever the type of device, it has to be controlled by a circuit which looks at the signal and decides how much to reduce its gain. This control circuit is known generically as the 'sidechain'.

The reason a lot of dynamics processors provide access to the sidechain signal is to allow additional external signal processing to modify the signal that the sidechain is working with, and the usual process is an equaliser. It is worth emphasising at this point that we are talking here about full-band compressors — whatever we do to the sidechain signal, the level of the entire input signal is affected when the compressor operates. In multi-band compressors, the input signal is split into several frequency bands and each is processed separately, which is a very different thing and should not be confused with the approach I'm describing here.

Consider the situation where a very bass-heavy mix needs to be compressed. The amount of compression is determined by the amount of energy in the sidechain, so in a bass-heavy mix, the amount of compression is going to be heavily influenced mainly by the bass signals because that is where most of the energy is. In extreme cases, the result might be heavy gain reduction on each kick-drum hit or bass-guitar note, which might not produce the required overall control at all.

One solution is to insert an equaliser in the sidechain to filter out or reduce the sidechain signal's low-frequency energy. The result is that the compressor sidechain now determines the amount of compression on the energy in the mid- and high-frequency ranges, which will probably produce a more natural and consistent sound. 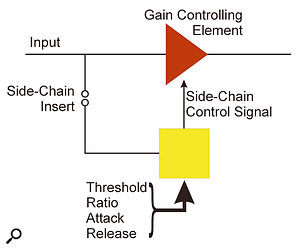 Another technique using equalisation of the sidechain is to deliberately increase the compressor's sensitivity to certain frequency bands, and the classic example here is the de-esser. Sibilant singers, for example, tend to produce peaks of excessive energy in a fairly narrow frequency band somewhere between 2kHz and 8kHz. Ideally, such problems should be avoided through careful mic selection and positioning, but if you are faced with a recording already containing sibilance, you can often deal with it quite effectively using a de-esser, or a compressor with an equaliser inserted in its sidechain.

By using the sidechain equaliser to boost the frequency region containing the sibilant energy, the compressor is made more sensitive to that frequency region. As a result, even quite small increases of energy here will result in quite large amounts of compression, thus reducing the audible impact of the vocalist at the moment of sibilance. It can take a little juggling of equaliser boost, threshold, ratio and attack/release settings, but when properly optimised this system can prove extremely effective.

Sidechain equalisation can also be used with gates and expanders in the same way. Consider a snare-drum mic which has a lot of spill from both the hi-hat and the kick drum. If the energy level of hat and kick is sufficiently high, it might prove impossible to find a threshold setting which allows the gate to let the snare through but hold back the kick and hats. One solution would be to reach for the sidechain equaliser again — and adjust it to remove both the low kick-drum frequencies and the higher hi-hat frequencies, leaving just the mid-range snare drum frequencies. A pair of high- and low-pass filters are ideal for this job, but high and low shelf filters will usually work as well. With only the mid-range snare drum signal left in the sidechain, the gate is left in no doubt when to open and close, and setting the threshold is now remarkably easy!

These are just a few obvious examples of sidechain equalisation, but it is a powerful technique which can be used in a wide range of applications to solve problems or to make dynamics processing more effective and easier to control.

In practice, it is useful to be able to listen to the output from the sidechain equaliser to help fine-tune the EQ settings — doing it 'deaf' is not ideal. A lot of hardware and software compressors incorporate some form of sidechain equalisation as standard, and these units usually have a 'Listen' mode which routes the sidechain signal to the output to allow auditioning of the EQ settings.