Q. What exactly is comb filtering?

I've read many articles in which you mention phase and comb filtering but I'm not really sure what these terms mean or how they affect my mixes. Can you explain them without being too technical, please?

Comb filtering creates peaks and troughs in frequency response, and is caused when signals that are identical but have phase differences — such as may result from multi-miking a drum kit — are summed. An undesirably coloured sound can result. The same effect can be harnessed deliberately to create flanging effects.

SOS Editor In Chief Paul White replies: When discussing the phase of electrical signals, such as the outputs from microphones, we tend to start out by describing the relationship between two sine-wave signals of the same frequency and the consequences of any timing offset between them. Where both signals have the same timing, such that their peaks and troughs coincide exactly, they are said to be 'in phase', and the voltages of the two waveforms will add together. Where both signals are of the same amplitude, the signal voltage will double (ie. increase by 6dB). If, however, they arrive at different times, we say that there is a difference in phase, the most extreme case being when the peak of one signal coincides exactly with the trough of the other (assuming, again, the same amplitude), causing them to cancel each other out completely, producing no sound. Where the amplitudes are different, the degree of cancellation will be smaller, but it will still be present to some extent.

At points between these two extremes, the combination of the two waves will exhibit different degrees of addition or cancellation. Phase is measured in degrees; a whole waveform cycle is expressed as 360 degrees and a 180-degree phase shift marks the point of maximum cancellation if that waveform is added to one with zero phase shift. When the waveforms are 1.5 cycles apart, they will also cancel, as this again brings the peaks of one waveform into coincidence with the other. This happens again at a time difference equivalent to 2.5 cycles, 3.5 cycles, and so on. Similarly, spacings of 1.0, 2.0, 3.0, and so on, cause addition as the peaks become coincident. 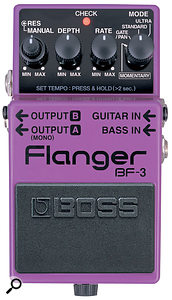 Note that although the 'phase' button on a mic preamp or mixing console inverts the signal — and so causes cancellation if the signal is summed with a non-inverted version of the same signal — polarity is not the same thing as phase, and the button really should have a different name! However the 'phase' button can be used to help resolve some phase-related problems.

The simplistic explanation of phase given so far describes what happens with sine waves, but typical music waveforms comprise a complex blend of frequencies. If we examine the same scenario, in which two versions of a musical signal are summed with a slight delay, some frequencies will add, while others will cancel. A frequency-response plot would show a sequence of peaks and dips extending up the audio spectrum, their position depending on the time difference between the two waveforms. That's how a flanger works: a delayed version of a signal is added to a non-delayed version of itself, deliberately to provoke this radical filtering effect, which, because of the haircomb-like appearance of its response curve, is affectionately known as 'comb filtering'. Varying the time delay makes the comb filter sweep through its frequency range, picking out different harmonics as it moves.

A less severe form of comb filtering occurs when the outputs from two microphones set up at different distances from a sound source are combined — a situation familiar to anyone who has miked up a drum kit, for example. Because the more distant mic receives less level than the close mic, the depth of the filtering isn't as pronounced as in our flanger example, but it can still compromise the overall sound. That's why some engineers take great care to adjust the track delays in their DAWs to ensure that the waveforms from each drum mic align precisely. When layering drum or bass sounds, it's particularly important to ensure that the first waveform peak of each is aligned and that both peaks are positive or both negative. If they go in different directions, the low frequencies will be very obviously affected, resulting in a less punchy sound.