Q. What is a Ground (Earth) Loop? Skip to main content 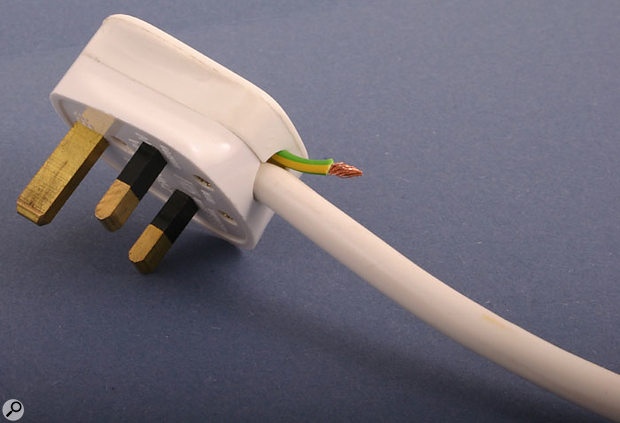 Lifting the mains earth like this could lead to serious injury.

Years ago I touched a guitar that was plugged into an amp against a radiator, and it blew the amp and melted the guitar string. Afterwards someone told me that this was caused by a ground loop, but I've never actually understood what that means.

Technical Editor Hugh Robjohns replies: That wasn't a ground loop — that was a faulty amp with a missing safety earth. There was no loop, because there was no earth at all until touching the radiator provided the missing link. Had you sat on the radiator and then picked up the guitar, you might well have been playing Emaj7 on a harp on a fluffy white cloud by now!

This is a distressingly common and life-threatening situation often caused by guitarists (or their so called 'technicians') in a futile effort to stop audible hums.

A ground loop is different — it occurs when there is more than one ground path between two items of equipment. Usually, one path is the screen of an audio cable connecting the two pieces of equipment and the other path is via their chassis safety earths in the mains plugs. Inside the equipment, the audio screen earth is often linked directly to the chassis earth, hence the possibility of a loop. If the two bits of equipment are plugged into the same mains socket, their chassis safety earths are effectively tied together at the same potential, and so there is unlikely to be any circulating ground current, despite the apparent ground loop. However, if one item is plugged into a different mains socket, its chassis safety earth might be grounded some way away from the other equipment's earth, and there can be a small difference in potential voltage between them. Silly as it sounds, earth is not the same everywhere. The potential voltage difference between their two chassis earths can cause a small current to flow, and since the earth provides a reference for the audio electronics, that flowing current causes the earth reference voltage point to vary slightly. This can be heard, usually as a low-level hum or buzz.

Ideally, the solution is to make sure that everything is earthed at one central point, so that everything shares the same common earth reference point. The easiest way to do that is to plug everything into a star arrangement of plug-boards fed from a single socket (assuming suitable power capacity). If that can't be done, the safest solution is to break the loop by isolating the audio cable screens at one end. The cable is still screened, but there is no longer any possibility of a loop, so the hum currents can't flow around it. Inserting transformers in the signal path can also break the loop, and this solution is common in outside broadcast and live sound rigs. DI boxes feature transformers for this purpose too. 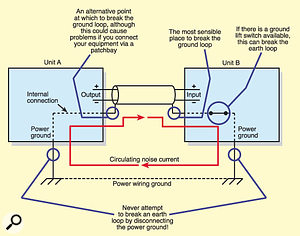 Problems arise when uninformed people decide to break the loop by removing the safety earth in the mains plug instead. This does break the loop, obviously, so any related hum will disappear. But it also means that the equipment is no longer earthed, and thus any fault that occurs in the equipment is now life-threatening! Sometimes you don't even need a fault to cause dangerous problems, though. Most equipment has filtering on the mains input to stop mains-borne noise getting in (or out). If you disconnect the mains earth in the plug, the nature of that filtering is such that the (previously earthed) chassis — and everything connected to it — 'floats' up to half mains voltage (making it about 115V in the UK). This means everything that should be safely earthed — all the exposed metalwork, including guitar strings — now carries a life-threatening voltage.

So if you have a guitar amp with the safety earth disconnected in the plug, the chassis is likely to rise to 115V, and everything that should be at 0V (earth) is now cooking with gas! Rest the guitar strings on anything that really is earthed (the radiator in your example, but a mic stand holding a mic that is earthed through its cable to a mixer is another very common alternative), and you have mains power now flowing directly through the equipment to find a real ground. This is almost certainly going to severely damage or destroy the amp, the guitar and — if you get yourself between the two — you as well! The classic way for budding pop stars to die is because of an amp with the mains safety earth disconnected. They rest one hand on their guitar strings and reach up with the other to hold a properly earthed mic. That leaves them with 115V effectively straight across their heart. Sweaty hands make very good conductors and it only takes a few milliamps of current flow to stop the heart. Musicians are electrocuted in this way every year, and while I'm all in favour of Darwinian evolution, sometimes the good guys get caught out too.

The lesson is that you should never remove the earth from a mains plug. If you have hum problems, break the screens on the audio cables or use isolating transformers in DI boxes.