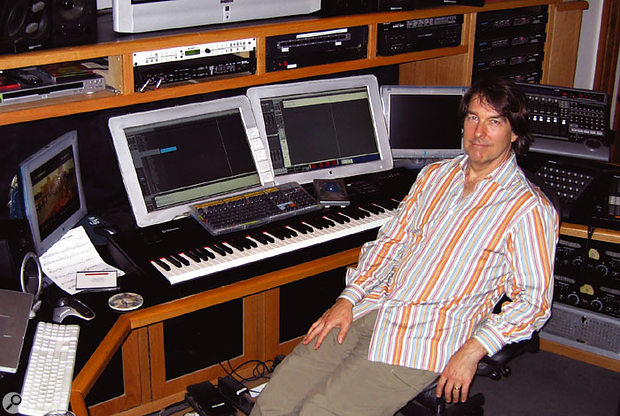 Composer David Newman uses a network of six PCs to produce his demos.

At the end of Dave Stewart's East West/Quantum Leap Symphonic Orchestra article in your June 2006 issue, there's information on David Newman's setup. I'd like to know how you install and network a number of PCs with the various libraries on them and connect to a Mac running Logic. I'm planning on upgrading and would like to get this information before deciding what to do.

SOS contributor Dave Stewart replies: To ease the CPU, RAM and logistical strain caused by modern large-scale orchestral sample libraries, many composers (generally the well-paid kind) run their libraries on multiple computers. PCs have traditionally been preferred to Macs for the job because Tascam's popular Gigastudio sampler runs only on PC. Also, PCs are cheaper! Connecting a Mac running Logic to a number of PCs is no different, in principle, to sequencing multiple hardware samplers: the sequencer (Logic) outputs MIDI data, and a hardware MIDI interface connected to the Mac distributes the data to the PCs, each of which requires its own MIDI interface to receive it. The PCs obviously need soundcards too — you can kill two birds with one stone by using a soundcard with a built-in MIDI interface. In such a system, the PCs operate independently and don't require networking.

It's worth mentioning that MIDI data can now be transmitted and received by multiple computers over a wireless LAN network, which could, in theory, save the expense of buying hardware MIDI interfaces and cables. Although this kind of networking may eventually become the norm, I don't know of any composers who do it at the moment!

If you're planning a multi-computer setup, it's best to start simply and add machines when required. This allows the system to grow organically at a sensible pace determined by your musical needs. For a simple orchestral arrangement of strings, brass and percussion, using one or two playing styles per section or instrument (say, sustains or staccatos for the strings and brass and straight hits or rolls for the percussion), you could probably install and run all the samples on one computer. It would have to have enough RAM (you need a minimum of 2GB for this kind of work) and your software sampler would need to support at least 32 MIDI channels. Most sound libraries run on both Mac and Windows, so anyone new to the field could install the samples on a second drive on the Mac running Logic and see how it copes with the workload before splashing out on a second machine. 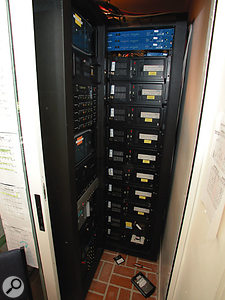 As the instrumentation expands and musical detail increases, you may reach a point where buying a second computer is inevitable. Strings use a lot of different articulations that tend to gobble up RAM, so you could install all your string samples on one PC and group brass, woodwind and percussion together on a second. However, if your writing for brass also begins to demand more instruments, sections and fancy, RAM-hungry playing styles, you could segregate your brass on the second PC and buy a third for your woodwind instruments, percussion, harp, piano, harpsichord, organ, choir — and so on.

The traditional way of connecting the computers is to use MIDI cables. One MIDI cable supports 16 MIDI channels, so if you were to connect an eight-way MIDI interface (such as Emagic's Unitor 8) to the Mac, you'd have 128 MIDI channels available for your arrangement. You could run MIDI for four PCs from one Unitor 8, assigning two of its MIDI outputs to each, to provide 32 independent MIDI tracks on each PC. In this setup, each PC would require a simple two-way MIDI interface, but to allow for expansion you might want to consider buying four-way or eight-way interfaces for one or more of the PCs. If you need more than 128 MIDI tracks, you can also connect multiple MIDI interfaces to the Mac. It's possible to keep the MIDI track count down by using keyswitch programs (which are now provided in most orchestral libraries). These enable multiple articulations to be accessed on the same MIDI channel.

To refer back to your question, composer David Newman uses a total of six PCs — two for strings, one for brass, one for woodwinds, one for piano and percussion and one for miscellaneous sounds — in a wired MIDI network, using four Unitor 8s on the Mac and an RME HDSP 9652 Hammerfall PCI soundcard (which has two MIDI Ins and Outs) on each PC. UK composer Andrew Blaney spreads his Vienna Symphonic libraries across three Macs and two PCs, using an eight-way MOTU MIDI Timepiece AV and three five-way MOTU Micro Lite MIDI interfaces on his main Mac (which runs MOTU's Digital Performer sequencer), and a combination of Micro Lites, RME HDSP 9652 soundcards and a two-way MOTU Fast Lane on his slave machines.

These are fairly large systems, but don't despair — as suggested above, you can run a scaled-down sampled orchestra on one machine and use it as a template for your arrangements. Concentrate on the musical ideas and instrumentation and don't worry too much about elaborate playing styles such as trills, rolls, grace notes and runs. You can fake these using the basic samples, before substituting samples of the real thing later, on an instrument-by-instrument basis, recording each style as audio as you go. It takes longer and requires more planning, but the end result should be none the worse for that.

What Do Mastering Engineers Actually Do?
2 days 11 hours ago.