Q. What is phase, and how can it be used to line up analogue recorders?

Technical Editor Hugh Robjohns replies: Much confusion arises because the term 'phase' is frequently misused to mean polarity or delay — which are entirely different things. In its correct meaning, phase refers to the point of progression through a cyclical signal, a complete cycle being 360 degrees. Figure 1 shows a simple sine wave with a nominal starting point (0 degrees) at A. Position B therefore marks a point on the wave after 90 degrees, C after 180 degrees and D after the full 360 degrees. 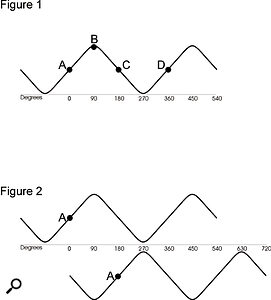 When two sine waves of identical frequency are compared, their relative phase can be measured — but note that this is only meaningful if the two signals are of the same frequency. Phase shifts are caused by all manner of electronic circuits (for example, equalisation) as well as by short processing delays. Indeed, the nature of a cyclical signal is such that the same point repeats at multiples of 360 degrees (for example, point B in Figure 1 repeats at 90, 450, 810... degrees), so two waves that appear in phase on inspection of a short section may in fact be 360 degrees out of phase.

Being aware of phase shift is important, since it determines what happens when the two signals are summed together. Figure 2 shows two identical signals, one phase‑shifted by 180 degrees relative to the first — a condition often referred to as 'anti‑phase' (also 'opposite phase' or 'phase‑reversed'). If these two signals were summed together they would cancel, resulting in no output at all. A relative phase shift of only a few degrees, by contrast, would result in the summed level being greater than the individual level of either signal. 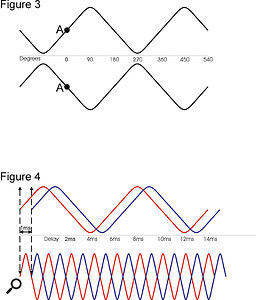 The possibility of confusion arises because a similar cancelling effect could be achieved by reversing the polarity of one of the signals before their summation (with zero phase shift between them). This is a subtle but vital distinction: Figure 3 shows a signal in normal (top) and reverse‑polarity versions. Changing the polarity of a signal simply swaps the positive and negative halves of the cycle over — a kind of mirror image, if you like — and true polarity reversals are commonplace in audio applications. For example, the invariably misnamed 'Phase' button on many microphone preamplifiers actually introduces a polarity reversal. Miswired microphone and loudspeaker cables where the hot and cold wires have been accidentally reversed in one connector create a polarity reversal too.

Short delays inflict phase shifts on audio signals, but the amount of phase shift is frequency dependent. Figure 4 shows how a short delay of 1mS affects two sine waves of different frequencies. In this example the low‑frequency signal suffers a very small phase shift, whereas the high‑frequency signal exhibits a much larger phase shift. Combining the pre and post‑delayed signals will result in a small increase in the amplitude of the low‑frequency component, but a complete cancellation of the high‑frequency signal! This is the basis of the 'phasing' or 'flanging' effect programmed into all those digital multi‑effects processors — changing the amount of delay causes different frequencies to sum and cancel.

To answer the last part of your question, the azimuth of an analogue tape head refers to its angle relative to the tape — it is supposed to be perpendicular (if it is not the frequency response will be less than optimal, and punch‑ins may not work as well as they should). One standard method of checking this alignment is to replay a test tape with a high‑frequency tone recorded across its full width whilst monitoring the signal from the top and bottom edge tracks on an oscilloscope (allowing you to view the audio waveforms). If the head is perfectly vertical, the two traces will be exactly in phase with each other. On the other hand, if the head has an azimuth error (ie. it is leaning over) one track will be replayed in advance of the other, and the resulting delay can be observed as a phase shift between the two traces.

If the azimuth error is large, the delay between edge tracks could result in a phase shift greater than 360 degrees with very high‑frequency tones, causing ambiguity over the correct alignment. For this reason it is good practice to start checking with a low‑frequency tone first, tweaking the azimuth to minimise any phase shift, then repeat with higher and higher frequencies, gradually increasing the precision of the alignment.